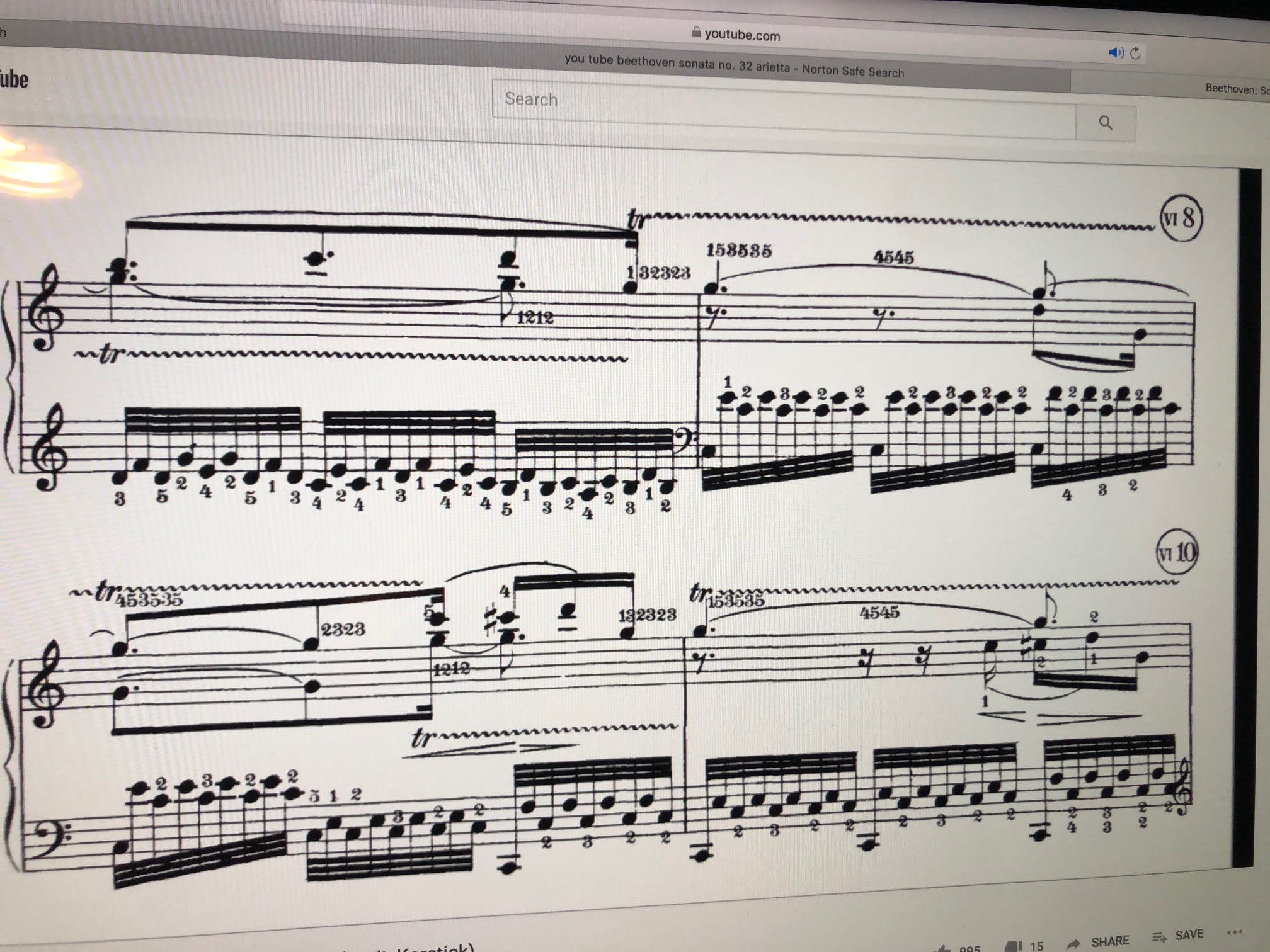 Now Just Listen to That!

Thanks to a minister father who was also pianistically trained, I grew up in a home that was blessedly alive with music, not only with his own playing—did he ever leave for church and pulpit without running through a Bach-harmonized chorale?—but also with hours of recorded music, played at volume levels you were meant to listen to. And often enough during lunch or dinner, when all in the family were conveniently, if rambunctiously, assembled.

The great pianist Artur Schnabel, who hated recording, though the iconic recordings he was finally persuaded to make in the 1930s of the complete Beethoven sonatas have never been out of print, once quipped,“I have a terrible fear of making a record of a Beethoven sonata and somewhere, some day, someone is going to listen to it while eating a liverwurst sandwich.”

In my family, we did it all the time, but even Schnabel might have approved our meals, given the close attention to which we were repeatedly summoned. “Now just listen to that!” my father would exhort his hungry children, as we lifted our forks and as some passage in Beethoven—or Bach, or Haydn, or Mozart, or Schubert, or Schumann, or Chopin, or Brahms—was supposed to elevate our souls. Well, that was the idea. My father was surely taking the long view.

In his acceptance speech for the first Aspen Award in the Humanities (1964), composer Benjamin Britten comments on the distinctive roles to be played in what he calls the “holy triangle” of composer, performer, and listener in creating the “magic” of the musical experience. No composer, he notes, creates in a vacuum, without having in mind not only particular instruments and suitable interpretive performers (along with a setting more or less conducive and appropriate to the performance), but also, crucially, a listener prepared and attentive. Music demands from the listener
some preparation, some effort, a journey to a special place, saving up for a ticket, some homework on the program, perhaps some clarification of the ears and sharpening of the instincts. It demands as much effort on the listener’s part as the other two corners of the triangle of composer, performer, and listener.

Whatever the work to be done by the composer, and later by the performer onstage, there is also indispensable work to be done in Row B of the Lower Balcony. Or, especially in these pandemic days, work to be done in front of our music systems or our computers. If no attentive listener, however remote, as part of the “holy triangle,” then no “magic” of the musical experience.

So, then, the listener, about whom, in retirement—and at the far end of my father’s ”long view”—I find myself reflecting more now.

One of the first books I reread upon retiring was Abraham Joshua Heschel’s The Sabbath. The thrust of Rabbi Heschel’s classic meditation is to turn reflexive thinking about the Sabbath on its head. What if, instead of viewing the six days of Creation as the main event and the Sabbath as simply the approving aftermath, we understood the Sabbath as the climactic point of Creation itself, what it was intended for in the first place? “’Last in creation, first in intention,’ the Sabbath is the “‘end of the creation of heaven and earth,’” says Rabbi Heschel, quoting earlier Jewish sources. “The Sabbath is not for the sake of the weekdays; the weekdays are for the sake of the Sabbath”—that day in which Creation itself was fulfilled and made holy by God’s delighting in it. Creation itself, then, is not complete without the morning stars singing—and God, too, exulting in the ongoing Sabbath spectacle.

Rabbi Heschel’s commentary on the Genesis story and Benjamin Britten’s reminder of the role of the listener have prompted some retirement thoughts.

“Where were you…when the morning stars sang together and all the heavenly beings shouted for joy?” Is our retirement, in fact, a Sabbath we could fail to observe and keep properly holy?

In a Wall Street Journal article that appeared around the time of my retirement (“In Defense of the Not-So-Busy Retirement”), sociologist David Ekerdt notes that in recent times the emphasis on busy retirement has gotten more pronounced. “For today’s retirees, busy boasting is the new status symbol—the idea that there is no time to rest when there are so many places to see, causes to champion, classes to take, languages to learn and businesses to start.” And, one might add, so many ways to keep a toe in the old career door to reassure ourselves that we are still in the game.

Behold, to begin close to home, the retired editor, seeking what freelance publishing project he might still advise! Or the freed-up preacher, contemplating which timeless sermons she might take on tour. Or the intrepid scholar, arousing that long-slumbering dissertation for one more walk around the publishing block. Or the wizened pedagogue, still holding forth one night a week to an adult-education class, his notes a little dated now, but banking on the maturity of his insight.

“How did we get to this place,” asks Dr. Ekert, “where busy is seen as the default pace in life? Blame much of it on the cultural value we place on hard work and the ennobling status it confers. A full life in retirement provides moral continuity with what went before.”

But how much of this “full life” is ennobling and truly moral now? The wish to be productive and useful is an authentic human pang, but where, one must ponder, are the moral tipping points where busyness begins to divert from a more important summons now to Sabbath? When can “moral continuity with what went before” begin to cheat on the new moral imperatives of “entering into rest,” as theologian Oliver O’Donovan beautifully titles one of his books, echoing the book of Hebrews?

When comes that time when we must silence that persistent “din in the head, the thrum of regret…of ambition and anger and vanity and wishing” (Cynthia Ozick), and, beyond any “competitive prizing” (Oliver O’Donovan), allow ourselves to joy gratefully in the graced accomplishments of our own creative lives—and then open ourselves as well to whatever other voices we may now be prepared to hear or sights to see? Or must now prepare ourselves to hear and see? What opportunities now for that “clarification of the ears,” that “sharpening of the instincts”? Indeed, what responsibilities? What moral summons now to receive rather than to give? To give, in fact, precisely by attentively receiving?

In This World of Wonders, philosopher Nicholas Wolterstorff titles his grateful memoir.

“Am I no longer young, and still not half-perfect?” asks Mary Oliver in one of her most quoted poems. “Let me keep my mind on what matters,/ which is my work,/ which is mostly standing still and learning to be astonished” (“Messenger”).

“Somewhere, always,” ornithologist Donald Kroodsma begins his lyrical and astonishingly observant The Singing Life of Birds,“ the sun is rising, and somewhere, always, the birds are singing.” And did you know that some closely neighboring birds of the same species sing in differing regional dialects?

Theologian William Brown, in his lovely book Sacred Sense, remarks that preacher Fred Craddock was in the habit of following an ancestral family practice of “going marveling” on Sunday afternoons, taking walks to “admire nature and collect unusual things—from rocks to wild flowers—to bring back home and share to the amazement of others.”

“Go up into the gaps,” cries Annie Dillard, that volcanically talented writer about nature and our spiritual lives:
If you can find them; they shift and vanish too. Stalk the gaps. Squeak into a gap in the solid, turn, and unlock—more than a maple—a universe. This is how you spend this afternoon, and tomorrow morning, and tomorrow afternoon. Spend the afternoon. You can’t take it with you.

Then, again, who can say, really, what “magic” we can’t take with us—forever—given a theology of sanctification robust enough?

This year is the 250th anniversary of Beethoven’s birth, and I have spent many evenings in these past pandemic months immersed in his music, especially in the string quartets and the works for piano. Last night it was that final, valedictory piano sonata (Op. 111), with its sublime closing movement, not even the surface noise of the remastered old 78s able to disturb the rapt concentration of Schnabel’s ascent through the  trills and double trills into the silence of the galaxies.

Came that instructive voice out of my boyhood past, “Now just listen to that! If that’s not being in touch with the Divine, I don’t know what is.” Whatever the refinements of theology, my father was not one to limit the movements of grace. Or the summons to wonder and awe.

Remember the Sabbath day, to keep it holy.