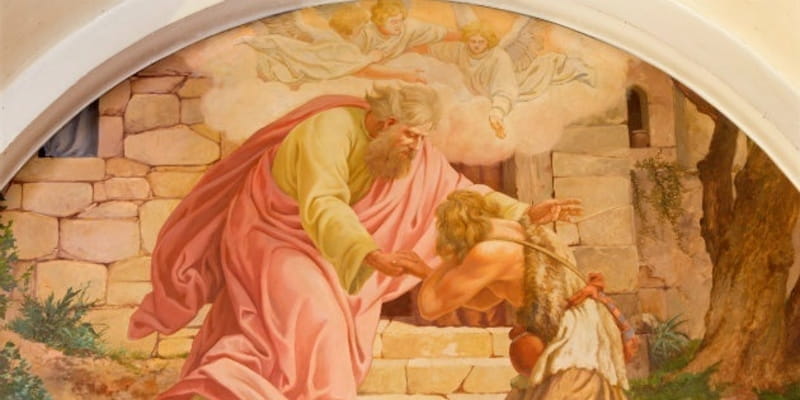 The shame of it all. We were all shamed by the request Jacob made to his father. The entire household was embarrassed by this self-centered request from this ungrateful son. With this impertinent request, the boy proclaimed his desire for his father to die.

“Father, I wish you were dead”—that was what he was really saying.

We all wondered what our master would do. Some of us bet that he would do what every other village father would do: put this mutinous kid in his place, discipline him in no uncertain terms, or maybe even disown him. But our master, Jacob’s father, did as his son requested. He divided his property between his stay-at-home older son and this rebellious younger son. Our master gave Jacob one third of his assets—what the Torah requires for the younger son’s inheritance.

Once he had traded his inheritance for cash, Jacob set off. No farewell parties from family and friends. He just wandered off all by himself. I spied him leaving early that morning, as the sun was breaking over the horizon. I wondered how he would survive. Did he really know what he was doing? Where was home if not here? That day I noticed my master’s pain-filled face. I knew he suffered. His home was broken.

Jacob traveled to a far country, where he squandered his money among the unclean Gentiles. Spendthrift that he was, Jacob threw big parties, dished out expensive gifts, and built a reputation for generosity. He bought esteem. He gained status. He was living, so he thought, the good life.

When he had squandered everything, a severe famine descended on the land, and Jacob was in need. He thought briefly about returning home, but that was impossible. He would have to face his scornful brother and live forever indebted to him. And he would have to face the near certainty of being an exile mocked and taunted by the community. He wasn’t that desperate. He still had his pride.

But Jacob’s life was getting very difficult. His money was gone and his so-called friends had vanished. He pawned his outer coat, his family ring, and his shoes for money to buy some food to feed his empty gut. He tried begging, but he was a foreigner and no one gave him anything.

Knowing that Jacob was a Jew (and that Jews detested pigs) and wanting to get rid of this foreign beggar, a Gentile farmer offered him a job he was sure Jacob would refuse—feeding pigs. But to the man’s great surprise, Jacob took the job and went to the field to feed the pigs. This good Jewish boy was in an unclean land among unclean people feeding unclean animals. Life couldn’t get any worse than this.

But it did. Jacob got so desperate that he longed to eat the very food the pigs ate. Jacob had gone off the bottom of the Jewish social ladder and could get no lower. He had descended to live like swine, craving pig slop but unable to eat it because his stomach simply couldn’t take it. One day Jacob hit bottom. He was so starved that his hunger overcame his shame.

So he hatched a plan. He knew he would be cut off from his family if he returned without the money. But what could he do to earn money? He could not ask to be taken back as a son; he had forfeited that honor. Nor could he ask to be taken in as a slave for slaves didn’t make any money. But he could earn money as a skilled craftsman, so he would try to persuade his father to hire him as a craftsman’s apprentice. Then he would use that money to pay off his debts.

And so Jacob set off. As he approached his hometown, he was famished and exhausted. And his anxiety increased as he anticipated a gauntlet of rejection from the villagers. He expected to sit outside his family home, maybe for many days, until being summoned by his father.

But what Jacob saw as he approached his hometown he could not believe. His eyes deceived him, he thought. We saw it, too, those of us working on the edge of town that day, and we didn’t believe it either. Nothing like this had ever happened before. There was our master, Jacob’s father, running toward Jacob as fast as his aged legs could carry him. In our town, no man his age runs anywhere. It is undignified. The head of the household goes out to no one. People come to him. And further yet, my master had hitched up his robe in order to run faster, thus showing his legs. This was most humiliating.

The only explanation I could think of for such public humiliation was that this running father was filled with compassion for his homeless son. And so it was that when the running father met his stunned son, he embraced him and kissed him. Fearing the ridicule his son would face from the villagers, my master was filled with compassion. So he violated the social conventions and ran out to greet his son to save him from the scorn and pain. An unprecedented homecoming for a son thought long lost and likely dead.

What happened next exceeded our already astonished imaginations. Jacob, finally freeing himself from his father’s bear hug, fell down at his father’s feet and began the speech he had memorized while walking those many miles home: “Father I have sinned against heaven and before you. I am no longer worthy to be called your son.” But he could not finish. For through his tears he finally saw what his pride had so long blinded him from seeing: his father’s long suffering love. The young man’s scheme dried up and genuine remorse filled his aching heart.

Overwhelmed by the outpouring of his father’s love, Jacob abandoned his plan and simply threw himself at the mercy of his father. At long last he acknowledged being lost and accepted being found.

Prayer: God of compassion, help us to swallow our pride and allow you to receive us into your loving embrace.