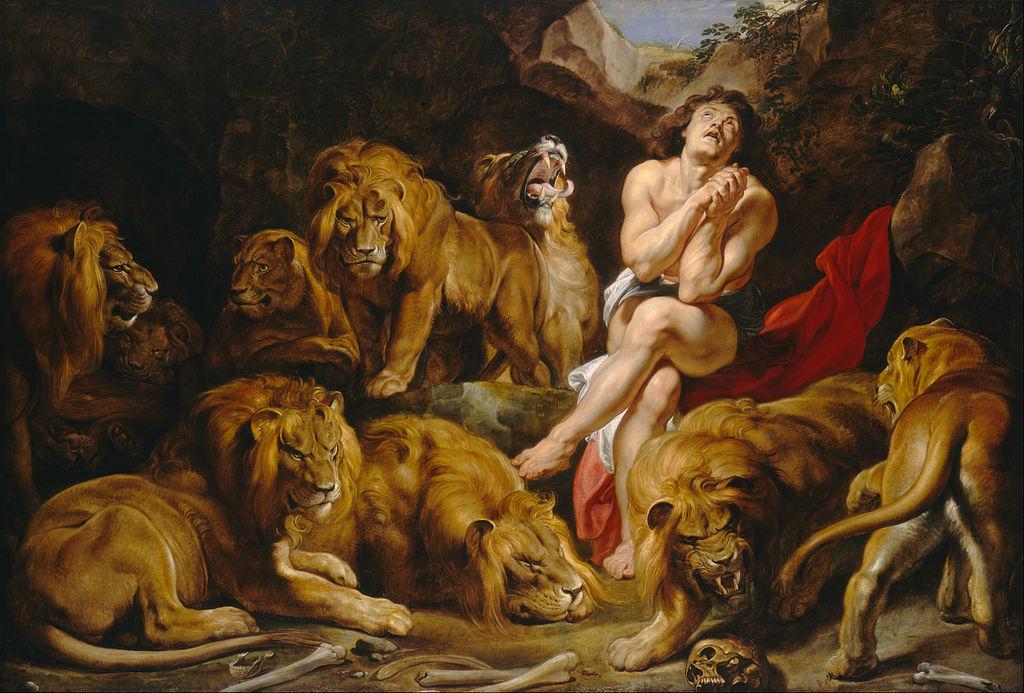 The media is constantly telling us that we are now in “the age of social distancing”—not the moment, not the time, not a few weeks, but the age. Since this business of self-isolation and quarantine promises to go on for a while, we’re going to need some biblical wisdom to get through it. After all, the Bible is supposed to be relevant in every age.

Turns out the Bible is surprisingly well supplied with instances of people stuck in limited spaces for a while. So let’s see what we can learn.

The Garden of Eden
The first chapters of Genesis say nothing about walls and gates around the garden, so perhaps it’s a stretch to propose that the human race began in a quarantine situation. However, Our First Parents—only the two of them, according to Genesis 1 and 2—were apparently isolated, at least from other humans. And since these early chapters also say nothing about God giving them a compass, one guesses they were not compelled to venture far, even without a wall to prevent them. Stuck in place, then, perhaps the fruit-eating episode could be read as the world’s first instance of people getting bored and restless while cramped in tight quarters together. Lesson: behave yourselves while in quarantine. If you do break the rules, don’t blame each other. It just makes it worse.

The Ark
Noah was on the ark with family and critters for, let’s see… 40 plus 150 plus… carry the one… 377 days of floating lockdown. What I’m saying is that even if you are now cooped up in the house with small, rambunctious children who behave like monkeys, things could be worse. At least you do not have two or seven of everything. And unlike Noah, you may well have Netflix and takeout. Happily, the ark story may suggest a method the CDC could use to figure out when this is all over: ravens and doves.

Uncle Laban’s
After the pottage incident, Jacob wisely determined to self-isolate from Esau, even if it meant living with wily old Uncle Laban in Haran for a while. Jacob’s experience demonstrates that in quarantine situations, one thing leads to another and before you know it twenty years have passed. However, if you play your cards right, then love, babies, and animal husbandry skills can result. Not sure if all that applies in our modern situation, but there it is. Other lessons of uncertain application to present circumstances: When making deals with relatives, get things in writing. Also, look under the veil before saying “I do.”

The Desert
I suppose we could read the Exodus as one interminable, sand-scoured, post-slavery quarantine. I know we modern folks are looking at several dreary weeks of being stuck at home, but chances are slim this will last forty years. One hopes. Anyway, much like the Israelites, we had to scramble to prepare and we are finding ourselves sorely ill-equipped with appropriate skills for our sojourn. Eventually, the Israelites figured out that if you complain annoyingly enough, the Lord will provide, but I’m not sure you would want to share that biblical lesson with your children. It would be fun to announce that you are serving manna and quail for dinner, though.

Jael’s Tent
Skipping ahead to the book of Judges, we find Canaanite commander Sisera attempting to shelter in place after the defeat of his army by welcoming himself to the tent of an apparently compliant Israelite woman. Jael is not stupid, though. She is certainly not about to share her carefully hoarded toilet paper supply with an enemy army commander. So she deploys the tent peg up her sleeve, achieving a permanent solution to her Sisera problem. Kind of a worst-case scenario among possible sharing-close-quarters outcomes.

The Pit
The psalmist frequently finds himself in a pit and begs God to get him out. He doesn’t want to be there, he didn’t choose it, maybe enemies dug the pit for him. In any case, “the pit” is the biblical source for a phrase we may be using frequently in the next few weeks: “This COVID-19 business is the pits.”

The Lion’s Den
Feeling exiled in a house full of relatives and/or restless pets who are starting to feel like devouring lions? Daniel’s example suggests a three-pronged plan: insist on your innocence, pray a lot, and learn to be a lion whisperer. Lesson: virtue is rewarded.

The Desert, Redux
On to the Gospels. Both Mark and Matthew report that immediately after Jesus’ baptism, he was driven to the desert. We’ve always assumed this was in order to fast and pray. But remember that Jesus had just been baptized in the Jordan, with a crowd of others. Jesus probably realized that the Jordan River was a veritable petri dish of germs. Maybe the forty days in the desert was a noble act of self-isolation, just in case. Jesus wanted to spread love and forgiveness, not the plague. The fasting may have been a result of not packing enough sandwiches—so hard to estimate what you’ll need—and the temptations, well, who of us isn’t facing our demons during this time?

The Upper Room
The other Gospels are vague about this, but John reports that after the crucifixion, the disciples locked themselves in a room “for fear of the Jews” (John 20:19). Tradition has it this is the same upper room where the disciples shared the Last Supper. Makes sense they would return to self-isolate in a place they knew. Thankfully, according to Luke, they remembered to pack a supply of fish and a broiler (Luke 24:42). This story offers some comfort: Even if you’re afraid, hang in there, eat some fish, and wait for Jesus to come and bring reassurance and peace. Current recommendations from the CDC, however, stipulate that you gather in groups of fewer than eleven.

The House of Ananias
Actually, it was the house of Judas on Straight Street in Damascus (Acts 9:11). Immediately after his blinding road-side experience, Saul goes to this house to recover for a few days. Soon enough, Ananias, the local ophthalmologist, shows up to restore Saul’s eyesight. That’s all great, except that when Saul bursts out the door and announces himself ready to help with the Christian cause, no one trusts him. He gets passed along from place to place and eventually winds up in the desert of Arabia (Gal. 1:17-18). It takes him three years—working remotely the whole time—to retool his scripture knowledge and gain trust with HQ in Jerusalem. The good news is that, eventually, his involuntary quarantines lead to a new career as curmudgeonly evangelist and epistle-writer. Lesson: perhaps now is a good time to retool for that career shift you’ve been considering.

Isle of Patmos
I keep seeing social media memes about how, when the theaters were closed for the plague, Shakespeare wrote King Lear. Very impressive. But how about that Apostle John? Tertullian claims that the Romans tried to boil John in oil, but he popped out unharmed. So instead they banished him to the Isle of Patmos. There he wrote the book of Revelation, which has way more than five acts and a body count far above Lear’s measly nine. And what’s more tragic than apocalyptic horsemen and bowls of wrath? I guess this means either that situations of banishment and isolation can lead to extraordinary divine visions, or it means we could all go wacky crazy.

No doubt there are more examples of biblical quarantines one could ponder. Let’s get a-pondering because the next weeks and months will be rough. We can only hope Jesus meant it when he said, “And surely, I will be with you always, to the very end of the age.”