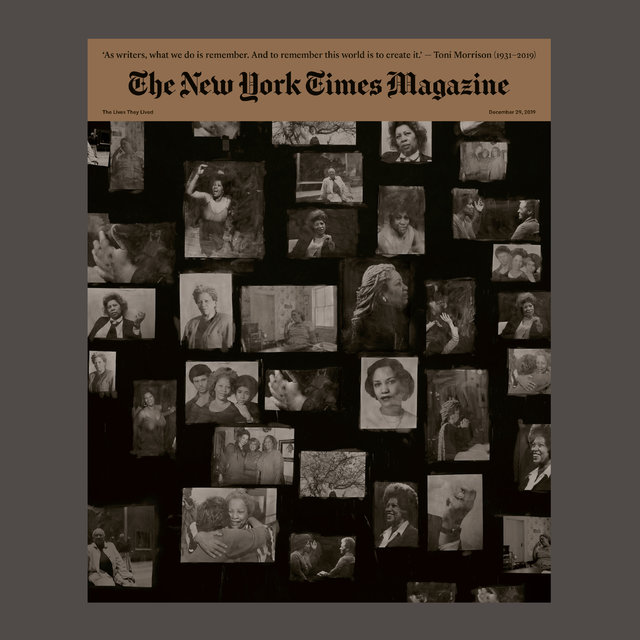 For some years now I have taken the two or so hours it requires to read the entire end-of-year edition of the New York Times Magazine. (I may have even blogged on this before.)  On the last Sunday of the year, the magazine devotes itself to the theme “The Lives They Lived.”   This year the magazine featured the profiles of twenty-two people who died during 2019.   Yes, as always there are a few names you have heard of for a long time.  This year these better-known folks include Doris Day, Toni Morrison, Harold Bloom, Peggy Lipton, Elijah Cummings.

Most of the profiles, though, are of people you have seldom—if ever—heard of before.  And those are the ones that often make for the most compelling reading.  Some examples from Sunday’s magazine:

Leah Chase, the black woman who defied the Jim Crow era of the South by opening the New Orleans restaurant “Dooky Chase’s” where—right  up until her death this past year at the age of 96—Leah served up some of the best gumbo and jambalaya anybody ever tasted.  Yes, Dizzy Gillespie and Louis Armstrong and Sarah Vaughn and Martin Luther King, Jr. and George W. Bush and Barack Obama all ate at Dooky Chase’s, but it was the poor people Leah served for free all those many years who probably cherished her gumbo more than most.

Unita Blackwell, who also defied the Jim Crow era by organizing for voting rights for blacks, eventually going on herself to become the first black female mayor of her hometown of Mayersville, Mississippi.  She held that post for twenty years, bringing in the first water and sewer systems the town had ever seen and providing indoor plumbing to people who had never before had it (and that was in 1988).

Eddie Hill IV, the exceedingly bright, precocious, and promising little boy who at the age of 10 this past year had everything going for him—reading books well beyond his years, proving to be a genius-level whiz at math.  But Eddie died in July of a random bullet that ripped through the front window of his St. Louis home.  He is a reminder of something I heard Thomas Lynch once say: When the old die, they leave memories; when the young die, they leave dreams.

Barbara York Main, an Australian scientist who devoted her life to the study of spiders, opening up the wondrous world of arachnids—including the intriguing Trapdoor Spider—and earning an international reputation in so doing.  She revealed the world of wonder that is all around us, though we mostly miss seeing it.

Carrie Ann Lucas, who did not let her own rare neuromuscular disease prevent her from raising a severely disabled niece and then three other disabled children whom she adopted as her own, fighting along the way for greater accessibility for the disabled in all of society.

And there are more.  As I absorbed their stories on Sunday, I was reminded of what occurs to me every year when I pore over this issue of the Times Magazine: namely, the story of every person is as precious as it is unique.

It reminds me of a memorable Letter to the Editor years ago in the New York Times Book Review.  One week in an essay, a book critic was opining negatively about the spate of celebrity autobiographies that had come out in recent years, including 200+ page volumes by pop singers and TV actors who had not yet even hit 30 years of age.  The author then cynically noted—his eyeroll over this statistic exceedingly apparent—that in a recent poll something like 70% of those surveyed believed they had a life story worth telling.   “Yeah, right” the critic all-but wrote.

A couple or so weeks later a savvy person wrote a letter to the editor that turned the critic’s cynicism on its head: “So this means that 30% of people really think their story has no value?  How tragic.”

This person was not—so far as one could tell—writing from a specifically religious, much less Christian, point of view.  But she could have been.  As on this day we conclude another year and—as many retrospectives are pointing out—as we complete also a whole decade, we can be reminded of God as the Great Remembrancer.  In another blog some years ago I think I noted that although I did not have much truck with the theological movement known as Process Theology, the one thing I did appreciate was the idea that God tenderly prehends into the divine Self our every moment as we move through life with God and in God’s world.

Every person has value in God’s sight.   Every story is worth telling and preserving.  Eddie’s, Leah’s, Unita’s, yours, mine, your grandparents’ stories, those of your friends and of your sisters and brothers in your congregation.

The lives they lived matter and mattered.  God knows this is true.  And so, as Revelation 2:17 predicts, when God hands to each of us that white stone on which our truest name will be revealed, we can be assured that this will be the true name of each person whose story matters to God and, in the end, whose story will matter to us all.