When nothing is something

We visited Stratford-upon-Avon, of course, toured Shakespeare’s house and watched the Royal Shakespeare Company perform Julius Caesar in the Royal Shakespearean Theater. I vaguely remember the grave of Jane Austin, but, twenty years after our visit, Piccadilly Circus is gone completely from my memory. We happened to visit Westminster Cathedral just at the moment the Latin mass was celebrated. Gorgeous.

But for reasons I can’t explain, nothing in jolly old England left as hearty an impression with me as the bombed-out hulk of Coventry Cathedral. For a moment, the Battle of Britain was more than a history lesson on grainy newsreel, more than an whole album of old black-and-whites.

There the cathedral stands, open air, a ruin that despite its shambles outperforms a dozen museums at telling unforgettable stories. At Coventry, I don’t know that I ever felt closer to World War II.

But it’s not just the war that halts speech. If you’re born and reared in a church, a ruin seems especial sacrilege because you stand at the confluence of dreams on one hand–beside aspiring cathedral walls–and a nightmare on the other–the mess of brokenness all around.

Any church in ruin is a sepulchre. Even if no human being is buried beneath, when you stand inside broken walls, nothing but sky above, it’s impossible not to say that something alive has gone.

Some might consider it pretentious, maybe, for a tiny Kansas burg to let their old cathedral ruin stand, utterly disrobed, as if Greenbush, Kansas, were Coventry, England. It isn’t. 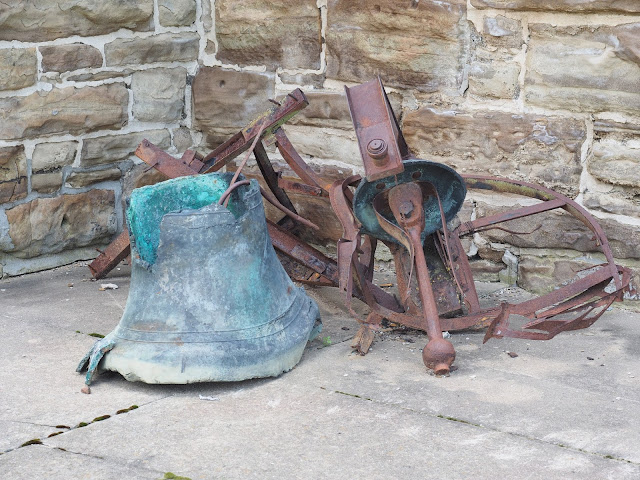 Greenbush is less of a town than an an momentary interruption aboard endless Kansas prairie. Winston Churchill never visited St. Aloysius Church; no buzz bombs fell in the neighborhood, no Luftwaffe laid waste the limestone blocks church members had quarried from nearby Hickory Creek to build the place. It was lightning, a prairie storm, what insurance companies used to call “an act of God,” that brought down St. Aloysius church, but there it stands, in ruin, yet not so, its silence still speaking.

And St. Aloysius has its own history. Legend has it that right there where those walls stand a Jesuit priest on his way to the Osage Mission just down the road hid under his saddle during an 1869 thunderstorm. The weather was so wild–in a pure Great Plains way–that Father Phillip Coalleton made a deal with God, lest he get struck himself by some errant bolt of fire. It was as if he were in foxhole, as, I suppose, he was. “Lord,” he must have muttered, scared to death, “save me and I promise I’ll build a church right here at this very spot.”

So he did. The church was wood, and was silly really, there being no one within a day’s walk, the whole neighborhood having been placed off limits to white settlement. But a promise is a promise, or so Father Phillip Colleton, S. J., determined, so he held up his end of the bargain. He built a place of worship. Nothing gaudy.  There were no frills in the foxhole contract.

Ten years later, when the “Neutral Strip” set up as a barrier between white folks and the Osage tribe disappeared, European immigrants homesteaded the region and found, to their delight, a little church already there, the place Colleton owed God. Even though Great Plains history includes nothing like the Battle of Britain, life in rural Kansas can be downright dangerous because in 1871 yet another storm brought down Colleton’s little frame church.

When the good folks of Greenbush looked at those ruins, they determined, in typical small-town fashion, that their next church would be bigger than any other in the county. So church members began mining limestone for a second church. A French stonemason did the exacting detail work, the rest of the community the heavy lifting. That church, the second, was dedicated in 1881.

Stay with me here. That church is the one you can’t help but note when you’re on old Mission Road; that’s the church in ruin, itself destroyed by yet another lightning storm, this one a century later in 1988.

That’s the church that begs comparison with the cathedral at Coventry, England; and those are the ruins that sit ominously along Mission Road, ruins that somehow still inspire. Sometimes silence speaks, just as walls do. Sometimes what’s not there is all you can see. Sometimes nothing is really something. 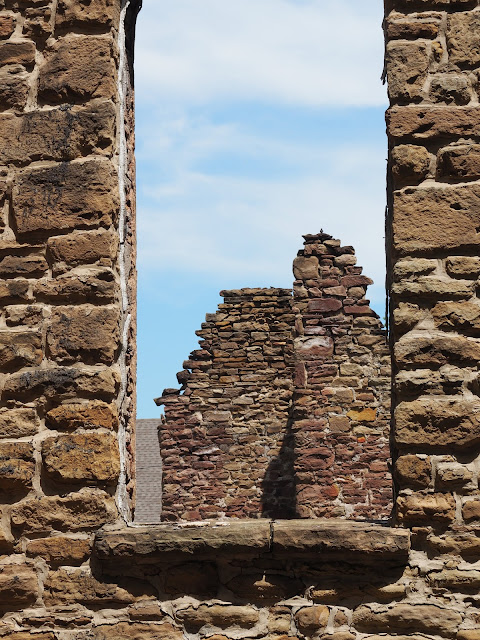