How easy it is to be human

How easy it is to be human

It’s much bigger than you might imagine, but then it had to be. Once upon a time, it was home to as many as 10,000 Japanese-Americans the rest of us believed so vulnerable to their native nationalism that they would not side with the U.S. of A., during World War II. How could we not lock them up? —some still spoke Japanese.

This week, 75 years ago, white-hot fear created mass relocation for 130,000 Japanese-American men, women, and children, a relocation that is too blessedly easy to forget. But it happened. We built ten camps, transformed race tracks and other plots of open ground, and filled them with neighbors.

If some morning you stand on the open grounds of Amache Relocation Center, Granada, Colorado, if you look up and down the almost endless rows of foundations, you can still feel something of the national panic after Pearl Harbor.

“I am for the immediate removal of every Japanese on the West Coast to a point deep in the interior,” so wrote newspaper columnist Henry McLemore. “I don’t mean a nice part of the interior either. Herd ’em up, pack ’em off and give ’em the inside room in the badlands… Personally, I hate the Japanese. And that goes for all of them.”

There were other reasons. “We’re charged with wanting to get rid of the Japs for selfish reasons. We do. It’s a question of whether the white man lives on the Pacific Coast or the brown men.” That’s what the head of a California agricultural association told the Saturday Evening Post in 1942. “They came into this valley to work, and they stayed to take over… If all the Japs were removed tomorrow, we’d never miss them in two weeks, because the white farmers can take over and produce everything the Jap grows. And we do not want them back when the war ends, either.”

Sounds somehow eerily familiar. Must be an echo.

Ten thousand people in hundreds of rudely constructed barracks, ten thousand men and women and kids who’d lived up and down America’s west coast, herded to places like Amache by intense fear and racial hatred.

Today, they’re long gone; but the absence of people and dwellings has not emptied Amache Relocation Camp of voices, especially if you stop some morning, all alone. Once Amache was a city, after all. Thousands crowded into its mess halls, worked its gardens, worked odd jobs, created its newspaper. Children were born here; men and women died.

To call Amache a concentration camp may well be pushing definitions. Amache was not a death factory. But the images are stunningly reminiscent. 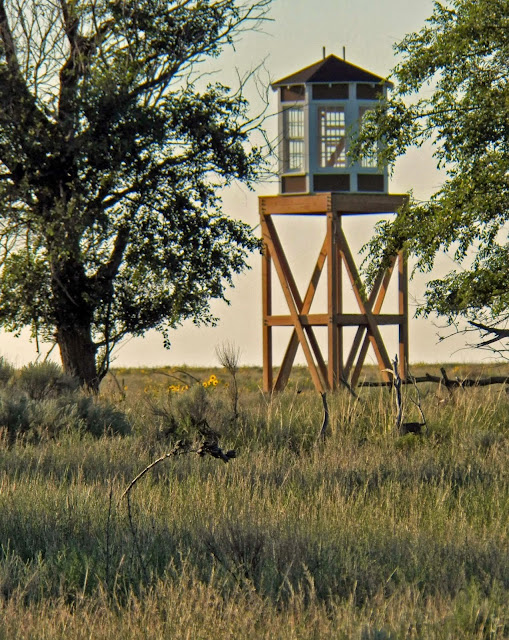 A people were summarily taken from homes many had lived in for more than a generation, then sent to places like Amache, an almost medieval city with walls and gates. The truth is, way out here in eastern Colorado, Amache Relocation Camp never was anything more than a speck in fly-over country, 10,000 invisible people in the middle of nowhere.

I’ve been listening to Midnight in Broad Daylight: A Japanese Family Caught Between Two Worlds, an exacting memoir of the horrors suffered by a single family rent apart by World War II. Immediately after December 7, it’s impossible for Harry, the American brother, not to see grave changes even on the faces of neighbors he’d long considered friends. His neighborhoods feel ghost-like overnight:

Driving through Little Tokyo between gardening jobs, Harry was struck by how quickly the neighborhood was losing its sparkle. Christmas and the New Year normally attracted shoppers, but they had fled the enclave. Once packed eateries looked forlorn with empty tables. “Going out of Business” signs proliferated overnight.

Just a few days ago, earphones in, I was burning away what calories I could on an exercise bike, listening to Midnight, when a half dozen Japanese students walked into the college rec center, started playing pool, and ping-pong–just hanging out.

It’s 75 years after Pres. Roosevelt issued Executive Order 9066, almost to the day; and what’s playing in my ears and mind is a story downstream from both those kids and me, not because my father took part in that injustice. He didn’t. He was nowhere near Amache Camp. When all those internees were trying to find something to do in a hot sun just outside foundations still tall enough today to emerge from tumbleweeds, my father was with the Navy in the South Pacific fighting a foe he always called “the Japs.” There’s an elegant samurai up on our library wall, booty.

I’m listening to the heartsick memories of a Japanese-American family and watching those kids hanging out, and I can’t help thinking how somehow understandable a shameful place like Amache was to white folks who’d just been attacked by Japanese planes coming in over Diamond Head on a perfect Sunday morning, armed with the singular aim of delivering death. Really, even for me, how easy to understand.

What remains of Amache Relocation Camp may well be out in the middle of nowhere, but, truth be told, it’s never all that far down the road.