The real story of the Last Buffalo*

The real story of the Last Buffalo*

“Now, boys, is our time for fun.” That’s what the hoity-toity artist said when he saw a herd of buffalo Comstock, the rancher, had spotted along the Republican River, the last prime buffalo hunting ground anywhere in the States in 1863. “Our time for fun,” the artist told them.

Albert Bierstadt, whose paintings hang in dozens of American art museums today, was on his way back east from California when he stopped in Nebraska. He and a newspaper man traveling with him stayed for a few days at the Oak Grove Ranch, when he decided to try his hand–not at hunting buffalo but painting them. Comstock and his men took rifles; Bierstadt packed brushes.

What fun? Bierstadt wanted badly to paint an angry buffalo. “I want to see him so mad that he’ll bellow and tear up the ground,” Bierstadt told Comstock.

That kind of rage might take some doing, Comstock thought, might even get them killed. But the rancher aimed to please. He told Bierstadt that for his own benefit, the artist should put up that easel on a knoll east of the herd, a sweet spot for him to sit and create the long drawn prairie background Comstock was proud of, his land, the place he’d chosen to live.

Once that landscape was down, Comstock said he and his son and a neighbor named Eubanks would create the kind of scene Bierstadt said he wanted to capture. The three of them would pick out a bull and wound him hot-blooded, then drive him up close and get him to pose. That was the plan.

All of 170 years later, this whole business sounds unmercifully wasteful; but it is, after all, 170 years later. Besides, this particular singular slaughter had a lofty mission–this whole thing was being accomplished for the blessed sake of art.

Eubanks, the neighbor, would shoulder his rifle from a draw near Bierstadt and his canvas, should the mad beast decide for some strange reason not to sit still for his portrait. Comstock determined the best way to get the pose the artist wanted was for him–for Comstock–to wound that big fellow, then get him more steamed by waving a red flag in front of his hoary face. Once that bull was on fire, Comstock figured to steer him out toward that knoll where that big fellow would get immortalized on Bierstadt’s canvas.

Plan worked perfectly. The wounded buffalo spit and spun and bellowed, just as predicted, and charged Comstock, who was aboard a horse so expert it eluded the mad charge, all the while circling the bloody animal and aiming him toward the artist.

But the story goes that Comstock played it out just a bit too close and got himself beside the buffalo where that angry old bull couldn’t see him. Just like that, that buffalo raised his huge shaggy head like a dying king and looked straight up the rise at the sitting duck Bierstadt, whereupon he started pawing and bellowing–the buffalo that is.

Bierstadt cried out for help and took off running faster than he himself ever thought he was able and that insane bull made short work of the easel, bits and pieces flying all over the prairie when he ground it to dust. A couple of seconds later, he took off after the painter.

Now nobody can prove this part, but what Comstock remembered, he used to say, was Bierstadt the artist running so fast his swallow-tail coat flowed out behind him so straight and hard the whole gang could have played a couple hands of euchre right there on the table that fancy coat became.

But why Eubanks didn’t shoot that big fella was something Comstock couldn’t help wondering. Then, finally, with that bull right there taking aim at the artist’s behind, that rifle cracked and the buffalo fell in his tracks. For years, Comstock told people who’d listen to his story that Bierstadt fell over himself, wiped out, but saved from “a fearful death.”

Several days it took for the artist to recover, during which time he started on another canvas, that ferocious image in front of him, in his mind and heart. He did everything he could to get it right. He was an artist, remember.

And that’s the end of story, at least the Oak Creek Ranch part. But there’s more. 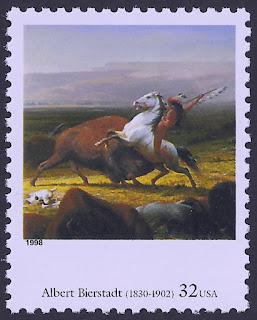 In 1998, the U. S. Postal Service created a series of commemorative stamps to celebrate American art. One of them featured a massive painting (six feet by ten feet), wide as the prairie itself, by an artist named Albert Bierstadt, a truly American epic painting titled The Last of the Buffalo. You may have seen the stamp. May even remember it. In case you missed it, here it is.

Already a century before, Bierstadt’s painting, The Last of the Buffalo, was put up for sale at the Chicago Exposition. It sold–hold your breath–for $75,000.

And no, that’s not Comstock the rancher riding the majestic white steed; it’s something like a a bare-naked cigar-store Indian deliberately chosen and outfitted, perhaps, to make rich Easterners drool.

If you look close, that landscape’s not Nebraska either. No Cornhuskers can claim anything close to mountains like those Bierstadt dreamed up in the background.

The artist Albert Bierstadt knew how to paint sprawling American landscapes, dozens of them, in fact; and he also knew how to sell those big sprawling images he committed to canvas.

But Comstock, the rancher?–he knew the story of what happened the day the artist saw what he needed to see, and was more than happy to tell that story, smiling, right up to his grave.

*The story is told in Nebraska Pioneer Reminiscences, 1916. The Last of the Buffalo (1888) hangs in the American Academy of Art.