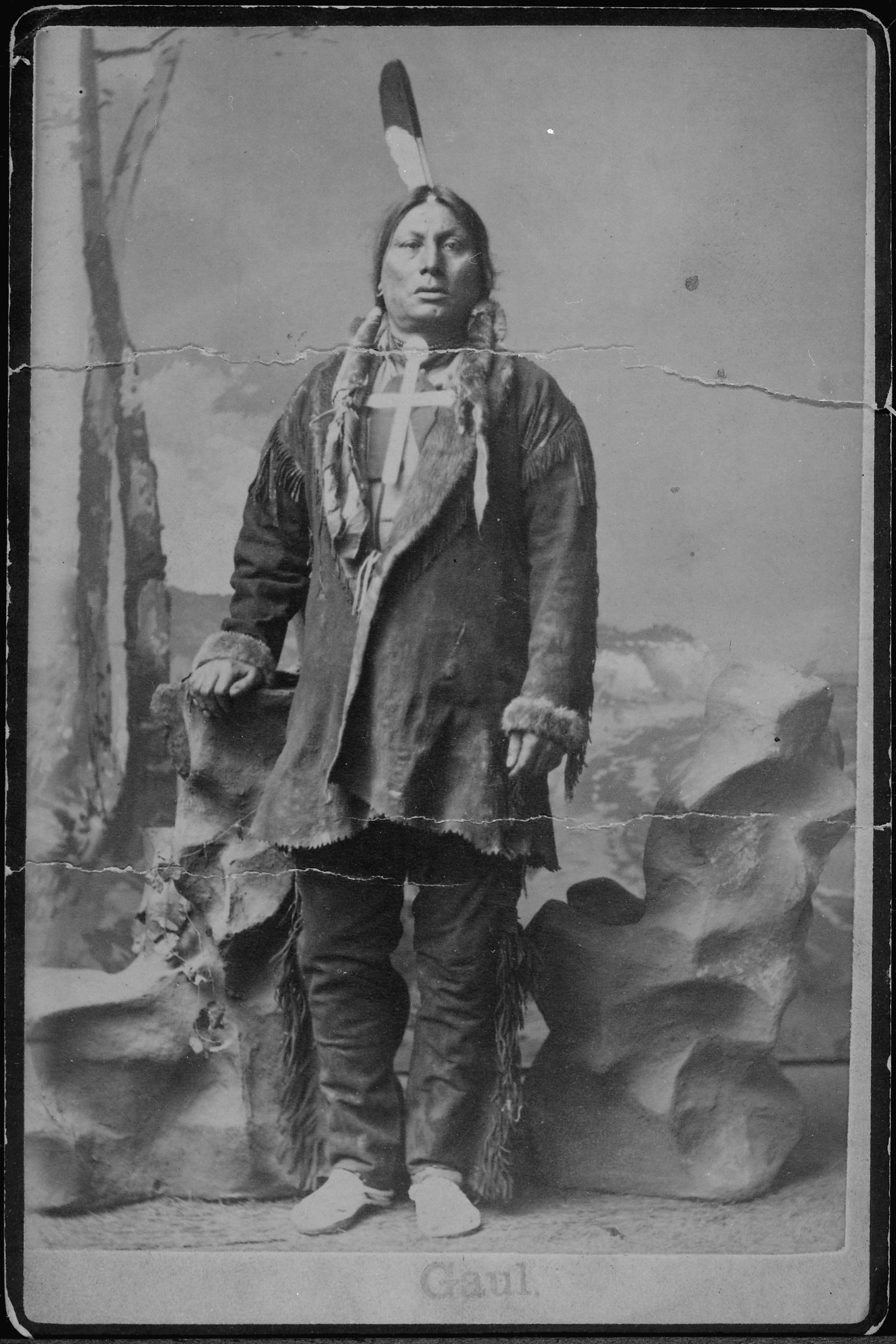 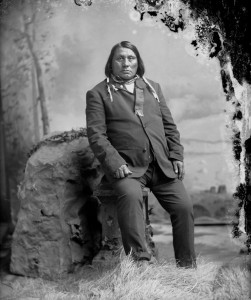 Gall was no giant, but he had to have been built like grand piano, broad chest, sturdy muscular arms, and impressively toned body. George Armstrong Custer’s wife, Libby, once gushed that she had never “dreamed there could be in all the tribes so fine a specimen of a warrior as Gall.”

When Gall stood up in front of the generals and diplomats at Ft. Laramie in 1868, at a time when the U. S. Government was offering the Indian people of the region their most beloved prize, the Black Hills, he wasn’t in the buying mood, even though Red Cloud and his southern Lakota neighbors were ready to barter. Gall was recalcitrant, angry as he’d ever been. When he stood up, he showed the white folks the museum of scars he’d picked up in countless fights with the white people streaming over Indian land, a testimony to his spirit, a warning.

At Ft. Laramie, Gall made clear he wanted no part of a settlement that would make the proud Indian people wards of the state. He wanted no reparations. He wanted freedom. He wouldn’t sign the Treaty of Ft. Laramie.

His reputation as a warrior only grew. In 1872, he and his band took on a military escort for the surveyors plotting out a path for the Northern Pacific. Gen. David Stanley had come prepared with gattling guns that routed Gall’s Hunkpapas so fiercely that some hack at the Sioux City Journal wrote, “If Mr. Big Gaul [sic] ever again attacks any party crossing the plains, he will…first look sharply to see if they got any Gatlins [sic] with them.”

Just four years later, along with this friend Sitting Bull, Gall had a place along the banks of the Little Big Horn. While Sitting Bull, a spiritual leader, never got his hands dirty during that famous battle, Gall rode fiercely into the bloodletting, as an Indian, but also to avenge the deaths of two of his wives and children.

For much of his life Gall determined that the only way to keep freedom alive on the American frontier was to fight the wave of white people threatening the Lakota way of life. The U. S. Cavalry knew him by the distinctive red blanket he always wore in battle. They called him “the fighting cock of the Sioux.”

After Little Big Horn, Gall and his people escaped to Canada, where they stayed for four years until conflicts with other tribes arose, much of it attributable to the growing scarcity of buffalo. His people were weary and homesick, so they went south in 1881 and surrendered in Montana to Gen. Guido Ilges, who triggered a fight right there that killed eight members of Gall’s band. Then he ordered them all to go to Ft. Buford, in North Dakota, even though a blizzard raged in temperatures that reached 28 degrees below zero. Gall’s fighting days were behind him and them.

He and his Hunkpapas were relocated at the Standing Rock Reservations, where Gall met and learned to like Agent Major James McLaughlin, a man who was married to a Sioux woman.

Something astounding happened to “the fighting cock of the Sioux.” Rather quickly he simply adopted white ways. One summary of his life says it this way: “He believed in rapidly assimilating Indians into the nation’s economy as small farmers; Christianizing them was also a goal he shared with many advocates of Indian reform back East.”

What exactly happened to change the warrior and leader, no one will ever know. Was that radical change attributable to his friendship with McLaughlin? Was it created by utter physical and emotional exhaustion? Did he simply recognize that the waves of white people were a tumult his people could no longer battle?

There is one more story about  Gall I can’t help but love. It may well be myth. It’s difficult to separate truth from myth in the life of a man like Gall.

One Sunday, on his horse, he was riding slowly by St. Elizabeth’s, the mother church of all the Episcopal churches on the Standing Rock Reservation, when from inside the sanctuary came the distinctively beautiful sound of music he’d never heard before. He stopped, listened, was moved deeply. That moment, some say, became was the first step he took on the road to his conversion to the Christian faith.

From outside, what he heard through that open door of the church was “Guide Me, O Thou Great Jehovah.”

I don’t know that I’ll ever hear that hymn again without thinking of Gall.

In the introduction to Dakota Cross-Bearer (2000), a biography of Rev. Harold Jones, a Dakota Episcopal priest, Father Raymond A. Bucko and Rev. Martin Brokenleg tell the story of the burial ceremony of Frank Fools Crow on the Pine Ridge (SD) Reservation, a ceremony attended by a crowd of photographers and journalists. At one end of the funeral procession were traditional leaders, some of them outfitted in feathered headdresses and ribbon shirts. At the other end stood Lakota Episcopalian clergy in clerical collars. Both groups prayed, they say, but the photographers turned away from church leaders and made sure the shots they were taking caught the traditional leaders.

“In the nineteenth century the cameras could well have pointed in the other direction,” they claim, “focusing only on the Christianized Indians.” And then, “Rarely have the two realities been integrated into a single picture.”

Did Gall’s faith ascend somehow within the bars of that beautiful old hymn, or is the story simply the species of myth white Christians want and need to hear?

Finally, I suppose, we believe what we want to, don’t we? All of us hear what God gives us ears to hear.