The thing with feathers 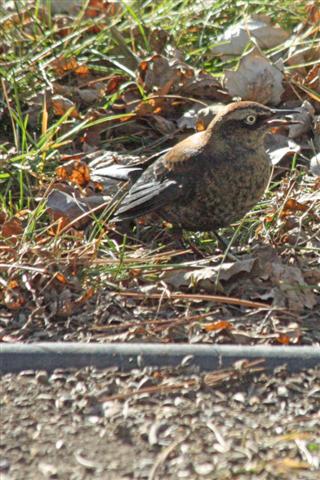 Monday–I’m quite sure it was Monday–this fine feathered friend thought he’d sojourn with us for a while and determined to land somewhere in the vicinity of my desk, I guess. What he didn’t count on was the fact that the alleyway was glass, so he smashed into our patio door, waking Rip Van Winkle, our cat, and startling me from whatever was dancing across the computer screen.  Bang!–and down.

Maybe it’s a cowbird–that’s my best guess.  Anyway, when I looked out the window he didn’t think was there, he sat on the step, seeing multiple worlds. He was very much alive, but going nowhere, and of course the cat’s tail was all a’tempest.

But the cat’s old and knows better than this fine feathered friend that there’s a window between him and an outside world that’s too big and too risky for a statesman like himself. I thought that maybe this cowbird was lucky and had only been stunned, got his bell rung, as we used to say on the gridiron.

Some time later, I went back to see if he was there, and he was. But he saw me and scampered away, making very clear that he’d lost the blessing of one of his wings.  He tried and tried again–and again and again–to get some loft that simply wouldn’t come.

But he’s no slow-poke. He can run like a deer, and he did, away.  I figured that was it. Sooner or later, he’d regain all of his physical abilities and be gone.

Now there are, let me tell you, a number of changes in our lives now that we’re both retired. I won’t mention all of them–there is this matter of good taste, you know–but one is that we pay attention to things we didn’t take the time to notice before. This circus of squirrels we entertain–and feed!–most every day create performances we wouldn’t miss. And we’re in Iowa–we’ve got corn.  We’ve put up bird feeders on both sides of the house, too.  Even though stiff prairie winds blow away more sunflower seeds than the birds (and squirrels) devour, I keep the feeders full for entertainment alone.

We watch stuff. We smile. We laugh. The three of us–Barb, Jim, and (sometimes) this cat, who’s also retired, but has been so for about the last half of his 13 years. 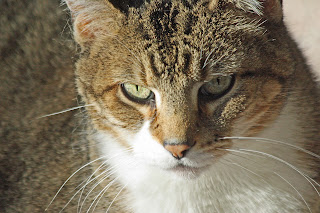 And because we do watch, we couldn’t help noticing our fine and felled feathered friend’s return on Tuesday, when he scampered about beneath the feeders on the both sides of the house, picking up stuff from beneath the gallery of feeders. He still wasn’t flying, but he was running around healthily it seemed, and obviously getting enough to eat.

Wednesday he was back. I saw him several times–maybe it’s a she, I don’t know.  It seemed to me that he was moving a bit more slowly, but I watched him pack his gullet with all kinds of goodies.  When danger comes–I’m not always sure how the birds and the squirrels determine what’s dangerous–what I mean is, when suddenly everybody departs, so did he–or she–taking refuge in one of a circle of now-naked bushes not far off.

Yesterday he was back again. I don’t know if he’s lost forever the use of one wing–he doesn’t carry it absurdly or anything–but he was packing away food as if he wasn’t suffering a bit.

Okay, I admit, I’m a romantic and my heart has gone out to him all week long. Or her. Honestly, I’d guessed some farm cat would have already created a smattering of brown/black feathers somewhere out there on the yard.

It’s just a story from our backyard, this handsome cowbird in a life and death struggle we’d never have seen last year because we simply weren’t looking. We talked about medical aid, but we don’t know any cowbird doctors, and putting that wing in a splint would profit him nothing, methinks.  Okay, I worry.

It’s dark out right now, half past six, but I hope he’s still there–hope is, after all, a thing with feathers.

Hope is the thing with feathers
That perches in the soul,
And sings the tune–without the words,
And never stops at all,

And sweetest in the gale is heard;
And sore must be the storm
That could abash the little bird
That kept so many warm.

I’ve heard it in the chillest land,
And on the strangest sea;
Yet, never, in extremity,
It asked a crumb of me.

That’s Emily Dickinson, by the way, and her little verse is as good as anything I could come up with to end this meditation.  Trust me, I’ll keep an eye out, all three of us will. 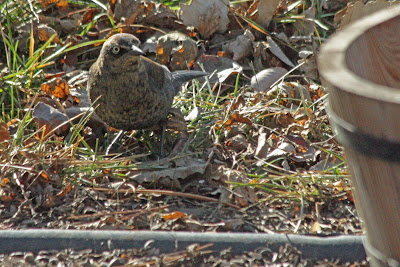 Post script:  I’m now told this survivor is a Rusty Blackbird, whose numbers are dwindling badly.  But the good news is that just two days ago I saw him fly–not far and not well, but fly, twice.  Saw it with my own eyes on two sides of the house.  Seriously.  And we haven’t seen him since, which is a joy.

Enough joy to make me say it again–“hope is the thing with feathers.”