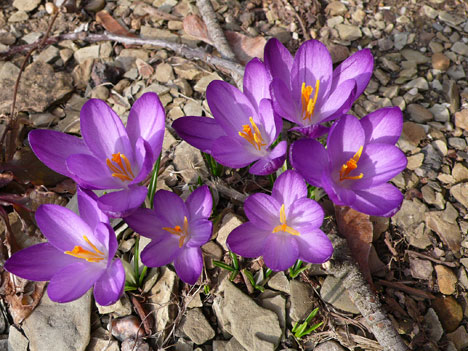 Maybe a good teacher could have tried it, some whirling dervish with Obama’s eloquence, Solomon’s wisdom, and Tina Fay’s comic touch.  Someone young, for sure.  Someone connected, someone who says, as if by instinct, “my bad.”

I really wanted to, but I chickened out, didn’t want to cast Luci Shaw’s pearls before swine.  I like my students, my last batch–they’re not swine.  But right now, just hours before spring break, when the temps warm everything in them that’s averse to schoolwork, when classroom windows grow bars like prison walls, I didn’t have the guts to bring it into class because  I know I would have lost, and Luci’s little gem didn’t deserve their batty indifference.

But they should have loved Luci’s poem.  It showed up a day or two ago on   Writers Almanac, a something-less-than-saintly celebration of that frothy, pulsing instinct that, right now, makes it impossible for them to give a hang about what happens in class.  Maybe “Revival” is a touch more religious than they’d like, but she’s delightfully sly.  We’re not talking Sunday School lesson here—but a sort of Pentecost of joy come spring, that irrepressible sense of new life the first 70-degree day day instills, winter’s coattails leaving the neighborhood in a hurried huff.  This poem is really this week, and Luci Shaw is not wrong—it’s revival time, in me, and in them.  It’s just too bad they wouldn’t recognize it in the poem.

March. I am beginning

to anticipate a thaw. Early mornings

the earth, old unbeliever, is still crusted with frost

where the moles have nosed up their

cold castings, and the ground cover

in shadow under the cedars hasn’t softened

around foliage and stem

[the earth, the “old unbeliever,” is going to get saved—watch!]

but as the light lengthens, preacher

I hate to admit it, but right here, my students would already have been lost. What do they know about moles and cedars, ice around foliage–about leaves and branches coming alive with light and color, “green out of gray.”  Right now they’re not thinking about some woebegone woods.  They’ll have to age some—no, more than some—before the natural world shows up in their consciousness like the rich uncle they never knew they had.

from the cotoneasters. A single bee

“’The heck are cotoneasters?” they’d say on a good day.  On a bad day, like these just before spring break, they’d simply lock down, check their watches to see how much more of this had to be endured, maybe rap out a text beneath the desk, thinking I’m as blind as I am old.

A crocus shooting up

a purple hand here, there, as I stand

on my doorstep, my own face drinking in heat

and my hand up, too, ready to sign on

“Okay,” she says, one much-less-than-tepid smile on her face, “I’m ready for the Holy Spirit of spring.”  Just a pinch of pepper, of what my mother used to call spotten.

But my students wouldn’t get it.  Oh, they’d sense the writer is a Christian—and this is, after all, a Christian college.  I’d read the poem, come to the end, a smile on my face as wide as the horizon, and they’d be wincing.  “Why doesn’t this woman just say what’s on her mind, after all?  Why does poetry have to be so weird?  It’s like a conversion sort of thing, right?—but I just don’t get it.”

Maybe a really good teacher could have pulled it off this week, the week of spring break, one of those profs you can get on iTunes, “the world’s best college classes.”

I didn’t think I could, so I chickened out.  I didn’t have the heart to see “I don’t care” all over their faces.

But Ms. Luci’s little gem is as tart as March, as goofy and playful as spring, don’t you think?

Oddly enough, on that we should all agree—me and Luci and every last one of my faithless students.  March is here, thank goodness, reason enough to make the already redeemed want to convert.

Here’s the good news for all the world:  it’s spring.