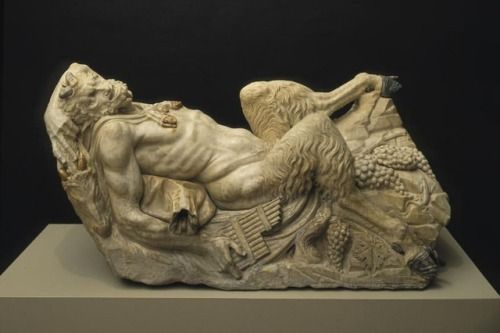 Pan and Panic in a Pandemic

Now when Jesus came into the district of Caesarea Philippi, he asked his disciples, “Who do you say that the Son of man is?” Matthew 16:13

Why did Jesus walk his disciples 30 miles from the Sea of Galilee to Caesarea Philippi near Mount Hermon to ask them this question? It is a good question to ponder, considering Peter’s answer marks a turning point in all three synoptic gospels.

Caesarea Philippi was where the Greeks built temples for Zeus and Pan. King Herod added a temple for Caesar Augustus. When Jesus came here it was under Herod’s son Philip, who rededicated the city to the new Caesar and himself, calling it Caesarea Philippi.

For Greeks and Romans, this was the place to go to worship Pan, the half-man, half-goat nature god who played the pan flute. In the drawing above you can see the Cave of Pan (aka the “Gates of Hades”), the court of Pan, a temple of the sacred goats, and a temple of Pan and the dancing goats. They believed that every winter Pan went into his cave, through the gates of Hades, and every spring he came back up from there bringing rain.

Pan was famous for his sexuality and is usually portrayed pursuing nymphs or goddesses. He was believed to cure infertility, so this was a popular destination for barren women and men seeking his aid in all matters sexual. Religious rituals here involved the priests and priestesses, worshippers and goats. Observant Jews did not go there openly.

Because the word “pan” means “all” in Latin, Pan became a kind of universal god, a representative of pantheism. Pan was also associated with panic because he had a nasty habit of suddenly appearing out of nowhere, shouting, and frightening people away.

Today the word pan makes us think of the pandemic that suddenly appeared, making many people panic.

So again, why did Jesus bring his 12 Jewish disciples here of all places to ask, “Who do you say that I am?” The Africa Study Bible says it shows Jesus is not afraid of pagan caves and temples or of competing beliefs and religions. Maybe the disciples were afraid, but Jesus wasn’t.

Peter’s confession was that Jesus is “the Messiah, the Son of the living God.” Jesus is to be worshipped, not Zeus or Caesar or Pan. Today Christianity is not competing with those three, but there are still people pursuing power and pleasure for their own purposes, not God’s. In an age of increasing secularization, with many people not professing any formal religion at all, what does it mean to openly confess the Christian faith in 2020 during a pandemic?

For starters, it means that despite everything, we still believe in a God who created the world and everything in it, who loved us enough to save us, and who even now is still with us. As humans, we may be afraid of dying, but we are not in a state of panic during this pandemic.

We confess that Christ has defeated death, will rescue us from the grave, and rise us up to eternal life. Revelation 1:18 says, “I am the Living One, I was dead, and behold I am alive forever and ever! And I hold the keys of death and Hades.” Everyone who calls out to Jesus will be saved.

For now, we live in a fallen world, with sin and evil. And as a result we face dangerous things like viruses that can hurt and kill us if left untreated.

Pandemics are nothing new, both Martin Luther and John Calvin ministered during a pandemic. Neither panicked, instead they wore masks and went to work for several years, helping those infected get through it as best they knew how.*

If we look out for the interests of others, then we show the world we do really believe in Jesus. “They will know we are Christians by our love,” especially our love for our neighbors. We lament what is happening, and then get busy helping others. The role of the church now is to make sure no one falls through the cracks of our broken human systems. The greatest gift we all have is love.