True Speech for those Asleep

The strike was called for the Friday just before we observed Storm Sunday this year.

First Reformed Church of Schenectady, has been following the Season of Creation lectionary during the Sundays of September for some years now. This was to be the first time, however, that I would preach on the theme of storms in this liturgical context. 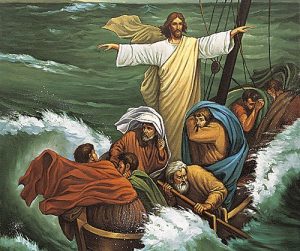 The gospel reading on tap was Luke’s account of Jesus directing his disciples to join him on a sail across the lake. He takes snooze on the cruise until his terrified shipmates wake him on account of a life-threatening storm. He promptly calms the storm and then calmly questions his bewildered followers. What’s the Word of the Lord here, I wondered in light of the youth-led global climate strike, then to be held on Friday, September 20th?

I put to practice my sermon process: prayer, getting into the text via various means, languages, and interpretive companions, and attending to context. Then comes what is most challenging for me: moving out of the text and stating in words of my own what the message will be for the coming Sunday.

Just as Jesus was awakened from sleep by his panic-stricken followers whom he’d unintentionally led into danger, so we, by the power of the Spirit, can also be awakened and act for the preservation of life of those who follow after us whom we have put in danger.

Once I focused, I choose the hymns, including the forebodingly minor, O God of Earth and Altar. The hymn certainly gives voice to God’s ultimate sovereignty, as well as the sin that so insidiously aggregates into all manner of delusion, destruction, and death. Still, it just didn’t feel fitting. But it was the best I could before it was time to print Sunday’s bulletins.

At 10am Friday, I met my peeps in the church parking lot. The group contained some of the usual justice advocacy suspects: Mary, Carrie, and Bill, but also a newbie to events like this: Julia, a thoughtful, playful, empathic and engaged 16 year old with a passion for art and all things green.

We walked a couple blocks and climbed aboard the 905 BusPlus with our water, whistles, clappers, and signs, both those downloaded and the down-home unwieldy variety. The bus progressed to Albany, the location of the march followed by a rally on the mall of the state capitol. Others clearly heading for the same destination joined us.

We disembarked near the Legislative Offices. Soon we gathered with a surprising number of people of all ages. We unfurled our signs, passed out whistles, clappers, and other noise makers, and caught snatches of the pre-march addresses by organizers. (350.org reported that over 4 million people in 185 countries took part this Global Climate Strike).

Eventually we started the march through Albany, chanting, whistling, grooving to the drumming led by local Unitarian Universalist minister. We stopped in front of various governmental offices and agencies. We shared our demands and aspirations–things like an immediate ban on all new fossil fuel projects; halting all subsidies for fossil fuels from New York state; investing $10 billion in the 2020-21 state budget for renewable energy, efficiency, and a Green New Deal, with 40% of such funding targeting disadvantaged communities; converting all public buildings and vehicles to zero GHG emissions by 2023; amending building codes to require all new buildings be carbon emission free by 2023.

Hot and tired, horse and hungry, we finally arrived at West Capitol Park. We made our way to a spot under the blessed cover of some trees. From there it was evident that hundreds more–of all ages—had joined us. Soon students from SUNY Albany and Albany High walked in. That’s when things really heated up.

As I said in my sermon the following Sunday, in my 50 plus years of listening to preachers—and preaching myself—I can’t recall hearing or speaking as passionate and prophetic a message as I did on that day.

We’d gathered at the invitation—urging—of the youth throughout the world to join them in their clear eyed, full voiced, unrelenting recognition of the ecological crisis we—and all flesh—are in together. They and those who come after them will unjustly suffer much more than we who have contributed to this increasingly ominous catastrophe.

All the speakers were students, striking from school. The personal and profound words of the lead youth organizer, Audrea, a first year student at SUNY Albany were the most moving to me. The speakers told us about the nature and significance of our present reality and the grief it brings them. Even more, they spoke of the grief of those impoverished throughout the world and least responsible for the crisis unfolding.

And yet, and yet, they also spoke of wild hope that is born of bold action, and deep immersion in God’s wondrous world. (The later was the point I underscored when I had a moment at the adequately-amped microphone.)

None of those speaking invoked the name of the Lord, but they spoke the truth we needed—and need—to hear, a truth that hurts yet must be heard and heeded for hope and healing to have a chance.

I was reminded of a quote from Anna Carter Florence, in her book, Preaching As Testimony:

True speech summons us home, but not necessarily to the ‘home’ we dream about, in a nostalgic or ambitious sense. True speech calls us to a home where everyone is loved and no one is lost—and that may look like a home we can scarcely imagine. True speech is the realization and embodiment of justice not the preservation of the community as it is.

Having heard the truth from those whom we’ve unintentionally but indisputably brought into a life-threatening storm, we adults sang out strong on a song penned at an earlier climate justice rally across the Atlantic:

Then and there I knew I had a far better post-sermon song to share with the congregation—complete with a “Climate Change Choir,” consisting of those from First Church present at the rally and now wide awake.

Daniel Carlson has been a pastor and teacher of the First Reformed Church of Schenectady for more than a decade, and, with his wife Mary, a resident of New York for over two decades, where they especially enjoy the forests, mountains, and lakes of this part of God's world.