End of August, End of the World

The End of August and the End of the World

For most of us, the end of August spells the end of summer. A hundred years ago, it looked like the end of the world.

The Jehovah’s Witnesses were the first to call it. The end would come, they forecast some years prior, in 1914. And so it did, though not as the Witnesses predicted and not as anyone intended. As the reverberations from Sarajevo in late June spread in an ever-widening game of diplomatic chicken, the various powers of Europe found themselves by early August apparently helpless to do anything but declare war on each other. Their monarchs and prime ministers, their priests and potentates and pastors invoked God and country; their generals uncorked their mobilization plans, the troops rushed or straggled to the front—and things spun out of control.

The war itself would claim seventeen million lives and leave another twenty-three million wounded. Four venerable empires vanished from the map and the worst epidemic in world history was unleashed, killing at least fifty—and perhaps a hundred—million people. A crippled generation, alternately demoralized and vengeful, took charge of an ill-fated treaty that proved to be but a twenty-year truce among the warring parties.

Looking at today’s date over those five successive years helps us recall how this disaster unfolded, and kept rolling.

The Guns of Augusts

On August 30, 1914, the Russian Second Army was obliterated by the outnumbered (8:1!) Germans in the Tannenberg forest; the Russian First Army followed soon thereafter. On the Western front, the Germans had advanced almost to where their war plan slated them to be. Almost, but not quite. By mid-September they had ground to a halt on the Marne sixty miles from Paris, and thereabouts they stayed for the next three and a half years—there, and all up and down the proverbial line of trenches that stretched from the English Channel to the Alps.

By August 30, 1915, the last British offensive at Gallipoli had failed, like all the others, and with it, Winston Churchill’s plan to execute an end-around at the Dardanelles. Evacuation would begin in November.

On August 31, 1916, German forces launched a huge counterattack in the battle of the Somme, which had started two months before with the greatest single-day loss of troops in the history of the British army. The battle would grind on into November, ultimately involving three million troops with over one million casualties. The results were inconclusive. Things went no better further south at Verdun where the battle had begun in February and would drag on, again with no decision, into December. It left 300,000 dead, perhaps twice as many wounded and missing.

By August 1917 some dramatic changes had occurred but with seemingly little effect. The czarist regime was overthrown in Russia in March; the United States entered the war in April; the French army mutinied in May after the loss of another 100,000 troops in its short-lived spring offensive. August itself saw the British begin the third battle at Ypres, in Belgium; it ended in the November rains with no significant change on the ground but half a million casualties all around. 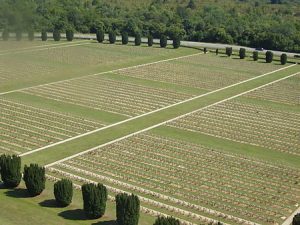 Douaumont French military cemetery seen from Douaumont ossuary, which contains remains of French and German soldiers who died during the Battle of Verdun in 1916. SOURCE: https://en.wikipedia.org/wiki/World_War_I_casualties

By the end of August 1918, things really had started to change. The great German offensive that had begun at the spring equinox, an all-or-nothing gamble to win the war, ran out of steam; on August 8, the Allies began their “Hundred Days” counter-offensive that did end the war. Action on August 30 illustrated the international character of the conflict as troops from Canada and New Zealand joined the French in making notable advances. By mid-September the Allies would be assaulting the Germans’ fortified Hindenburg Line; by mid-October, they had decisively broken it, and less than a month later, on November 11, it was all over.

In other headlines from 100 years ago today, 20,000 police went on strike in London and Vladimir Lenin was shot, but survived, an assassination attempt in Moscow. It was left for the future to recognize the birth on this date of Ted Williams in San Diego, of Leonard Bernstein five days earlier in Lawrence, Massachusetts, and of Adolf Hitler being awarded his second Iron Cross on August 4 at the end of the German offensive. The medal was formally presented by his Jewish lieutenant. Over the course of this month and the next in 1918, anti-Bolshevik uprisings popped up across Russia: in Archangel, in Tatarstan, in Siberia. These marked the start of a civil war which, exacerbated by invasions by eight foreign nations, would last five years and cost somewhere between seven and twelve million lives.

The Germs of August

Yet the body count of all these military actions was dwarfed by the single most lethal attack of viruses and bacteria the world has ever seen. Contemporaries called it the Spanish flu, only because that nation, being neutral, did not censor news and so published accounts of its king, prime minister, and cabinet members coming down with the disease. The counts were worse in combatant countries, but accurate reports were suppressed there out of concern for wartime morale. That left a lot to rumors about enemy agents spreading the disease and lurid accounts of its progress and victims. 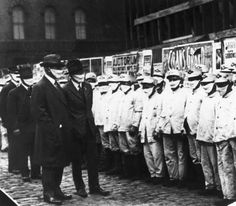 August 1918 turned out to be the critical month in this epidemic too. An earlier version of the flu had cropped up at a U.S. military camp in Kansas in March, whence it spread by troop dispersals to the far corners of the earth. This virus caused unusually high rates of infection but only normal rates of mortality. That changed in August when a mutant strain broke out simultaneously in Boston, Brest, and Sierra Leone. Four features made this second phase of the pandemic unique. (1) Fatality rates were unheard of: 25 times the usual for influenza. (2) Death was very rapid—typically in two days, though some victims reportedly dropped dead at work after leaving home healthy that morning or succumbed overnight along with everyone else who had been at that bridge party the night before. (3) Death was grotesque. People essentially drowned in their own fluids from an over-active immune response and bacterial pneumonia triggered by the initial infection. (4) The pandemic claimed the young and healthy—especially 20-40 year olds—along with the usual vulnerable children and elderly. (See the “W” curve below in comparison to the typical “U” curve.)

The disease spread quickly into civilian populations. Almost 200,000 Americans died of it in October 1918 alone, compared to 116,000 combatant deaths in the entire war. After the second wave of the epidemic ebbed, a third wave arose in early 1919, deadlier than the first but not as bad as the second. All told, one-third of the world’s population would catch the disease, and at least fifty million of them—perhaps twice that—would die: 675,000 Americans; 228,000 Britons; twelve to seventeen million, or 6% of the population, in India; 10% on the island of Tonga; 20% in Western Samoa. American life expectancy dropped by twelve years between 1917 and 1918.

Traumas this deep induced fervid dreams and radical schemes. Fascism was born and Communism bloomed in immediate postwar Europe. A Red Scare enveloped the United States from 1917 through 1920, and the “red summer” of white-on-black attacks in three dozen American cities in 1919 still stands as one of the worst seasons of racial violence in all American history. Protestant Fundamentalism emerged as a coherent movement under that label in 1919, and its end-times scenarios rarely seemed more germane or appealing. 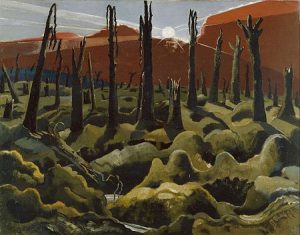 Every nation had great plans in the summer of 1914. None of them came true, partly because they worked at cross-purposes, partly from forces they had inadvertently unleashed. Forces of arms and men; forces of invention and industry; but perhaps most of all, forces of nature which dealt out the death so many had fallen in love with when it fell on others. These forces all came home, and the ways people explained them—or explained them away—went on to live long and lethal lives of their own. One hundred years later, what are these forces and stories among us, and where are they—and we—going?

James Bratt is professor of history emeritus at Calvin College, specializing in American religious history and especially the connections between religion and politics. Starting in Fall 2016 he took a break from blogging on The Twelve to teach in China and on the Semester at Sea, which venues afforded him some welcome distance from the USA’s descent into its current mortal illness. But now he’s back in the States, looking for hope. The title of his most recent book, Abraham Kuyper: Modern Calvinist, Christian Democrat (Eerdmans, 2013), is eerily echoed in that of the volume he has edited and completed for the late John Woolverton, which will appear in 2019: “A Christian and a Democrat”: Religion in the Life and Leadership of Franklin Delano Roosevelt.