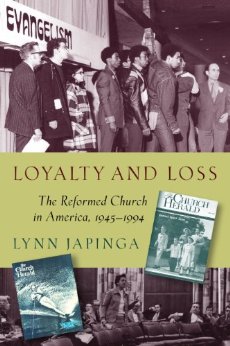 Today Jeff Japinga blogs for The Twelve. Jeff is an ordained minister in the Reformed Church in America who serves as associate dean and assistant professor of leadership and ministry at McCormick Theological Seminary in Chicago, Illinois.

Another year, another General Synod of the Reformed Church in America in the (orange) books. Strong opinions and weak coffee. Rubber chicken and elastic schedules. Old friends and new adversaries. Winners and losers. “Some things never change” is more than just a Sara Evans gold record.

We even keep fighting about the same issue: biblical interpretation around an understanding of homosexuality and the place and role of gay and lesbian persons in the church. We’ve been doing it almost every year, in some form, since 1990, some years more laudably than others. Last year was one of the ugly years, when the RCA Synod engaged in a rancorous, mean-spirited debate and eventually declared certain actions in support of gay and lesbian persons as “disciplinable offense(s).” Responding to the inevitable pushback, this year’s Synod said last year’s Synod “usurped its authority” in its “disciplinable” declaration. It also killed a proposal that would have opened the door to churches leaving denomination “without recriminations” (translated: with their property), something churches can’t do now.

Winners and losers. Different ones each year, but that’s how these things work. Except for something I heard in the debates both last year and this, words I hadn’t heard much at Synod before, no matter the disagreement, and I’ve been to 24 of these: “irreconcilable” and “separate.” Have we ever been this close to a split?, someone asked me.

As a matter of fact, we have, and not so long ago, when a series of Synod battles pushed the RCA to the very edge of dissolution. You can read about it in Loyalty and Loss: The Reformed Church in America 1945-1994, Lynn Japinga’s definitive new look at a tumultuous 50-year period of the RCA history of the RCA. (Full disclosure: Lynn is my capable and beloved wife.)

Loyalty and Loss is most remarkable for giving voice to people of the RCA: the pastors, professors, presidents, and just plain folk who inspired and critiqued the Reformed Church in America in the latter half of the twentieth century. Their words, in meeting minutes and General Synod debates and letters to the editor of the Church Herald, and from scores of personal interviews, drive the narrative; moments of divine intervention interspersed with utter human nonsense, framed with the kind of analysis that can make history startlingly relevant to the present.

Like the chapter on 1969, the year it almost all ended for the RCA. The 1969 RCA’s General Synod was a boiling cauldron of distrust before even the first words were spoken (not unlike this year). A long-hoped-for merger between the RCA and the southern Presbyterian church had been approved by Synod the year before, only to be scuttled by a failure to gain approval in two-thirds of the classes. Eastern moderates bitterly blamed obstinate Midwest conservatives for the failed merger; Midwesterners pointedly questioned certain theological positions of Eastern ministers as barely Christian, if that. When a handful of young male RCA members asked the ’69 Synod to hold their draft cards and Synod refused, the fuse was lit. Then a large group of women interrupted a session with a boisterous protest about the (lack of) place and role of women, and yet another ecumenical endeavor [COCU] was postponed, and the powder exploded. Harold Schut, a minister from New York, made a motion to form a committee tasked with “drafting a plan for the orderly dissolution of the RCA.” The end of the denomination. Said Schut in an interview he did with Lynn twenty-five years later, it was one of the hardest things he’d ever done in his life.

We’re still here, of course, and the book will tell you how and why. I remain similarly committed to the RCA’s future, one again not altogether certain. Perhaps if a stressed RCA needs a way forward, as one of this year’s task forces suggested in its very name, it should first take a look back. For what happened following the 1969 RCA General Synod could be enormously instructive today for our latest round of brinkmanship in 2013.

Unless, of course, what we’ve really lost in the RCA today is not the ability to interpret Scripture, as the shrillest voices so often say, but rather the commitment and community that come when something greater than our own opinion is at stake.

Writes Hope College sociologist Don Luidens of Loyalty and Loss, “(A) strong thread of loyalty among its members (and) a profound commitment to heritage and tradition … has often overridden (the RCA’s) other differences and provided the foundation for reconciliation and for progress into the future. In the end, though, (Lynn Japinga) asks the unsettling–and unsettled–question: will the waning glue of loyalty be sufficient to carry the Reformed Church into the future?”

Loyalty and Loss: The Reformed Church in America 1945-1994, by Lynn Japinga, is available through Faith Alive Christian Resources (http://www.faithaliveresources.org/Products/701671/loyalty-and-loss.aspx) and other favorite book providers.