I would like to be writing a review of the new movie The Hobbit, but I haven’t seen it yet. (My daughter went to a midnight showing, and her report is: “epic-ly awesome!”) Instead, I will reflect on G. K. Chesterton’s remarkable essay “The Ethics of Elfland.” This is a central chapter in Chesterton’s 1908 book Orthodoxy, in which he attempts to explain why, after much searching, he had arrived back “home” in Christianity. The book isn’t read so much anymore, perhaps because Chesterton was an enthusiastic debater with the public intellectuals of his day, so that his many references to the philosophical quarrels of the early twentieth century now seem dated and even tedious. His writing style, characterized by a kind of mania for precision parallelism and antithesis, may also strike contemporary readers as too formal and epigrammatic.

Nevertheless, “The Ethics of Elfland” offers some relevant observations, and I thought of it when I read Jason Lief’s recent post on Santa Claus, along with the responding comments. Jason argues that allowing children to believe in Santa Claus is a way of shaping their minds for faith. In an earlier post, he had made a similar argument about reading The Hobbit to his kids. Here’s what he said in last week’s post, in response to those who disabuse children of the Santa myth in order to avoid setting them up for disappointment:

What sets them up for greater disappointment is to paint a picture of reality that’s coldly mechanical. Our imagination is the source of meaning, and I believe it is also the place where we encounter the divine. Santa, fairies, and mermaids paint the world as magical, which prepares the way for thinking of the world as miraculous.

“Exactly!” Chesterton would have affirmed. In fact, this is precisely what Chesterton argues in his essay. About his childhood, he writes:

The thing I believed most then, the things I believe most now, are the things called fairy tales. They seem to me to be the entirely reasonable things. They are not fantasies: compared with them other things are fantastic.

Chesterton’s chapter attempts to outline exactly how fairy tales stretch the imagination. He begins by distinguishing “between the science of mental relations, in which there really are laws, and the science of physical facts, in which there are no laws, but only weird repetitions.” So in the fairy tale world, three beans plus two beans still equals five beans. But there’s no reason why certain beans shouldn’t grow into a gigantic, sky-scraping stalk. They generally don’t do that in the “real world,” but there’s no reason the world couldn’t have worked that way. After all, in the “real world,” eggs turn into chickens. Why?

[W]e cannot say why an egg can turn into a chicken any more than we can say why a bear could turn into a fairy prince; for no egg in itself suggests a chicken, whereas some princes do suggest bears.

There’s that precision antithesis for you.

The result of this for Chesterton was to see the whole world as astonishing, exactly because it might have been otherwise. Trees might have grown “tigers by the tail” instead of leaves. Eventually he gets to the idea that Someone made these choices about the world. But here he simply points out that fantasy stories remind us of the wondrous surprise of the world as it is. Everything is magic; everything is miracle. 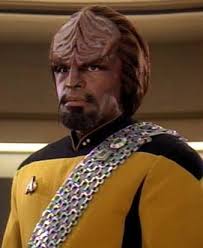 As I reread “The Ethics of Elfland,” it struck me that this same disposition has been cultivated in me by … cheesy science fiction. Yes! You would think that being raised on Star Trek, for example, would make me a fan of science, which I am. But science fiction is only partly about science. Mostly it’s about wonder and possibility. Science fiction operates very much like fairy tales in Chesterton’s sense—sci-fi reminds us that things might be otherwise. We have one sun. Well, Delta Vega has two. We have smooth foreheads. Well, Klingons have bumpy ones (at least after 1987). Human blood is iron-based. Vulcans’ is copper-based and therefore green. Why couldn’t humanoids have blue or green skin—and antennae? And then there are the wonderfully speculative philosophical questions that sci-fi explores. What if nanites became sentient? Does the sanctity of life apply to silicon-based life forms? What is the “human” rights status of a sentient android? What if we could travel through time—what would the rules be? Could causality work backwards in time?

In many episodes of the Star Trek series, something bizarre happens (space anomaly! temporal disturbance! being of pure energy!) and eventually we may get a quasi-scientific explanation for it. But that does not diminish the wonder. Traveling with the Enterprise crew definitely teaches wonder—and its proper result, humility. There are more things in heaven and earth than are dreamt of in your materialist skepticism, Ensign Horatio. The universe is full of mystery; humans are feisty little creatures, but we are mighty small in the vast scope of things, and the way we think about reality is probably ignorant and limited.

As it turns out, this last observation is not merely a cheesy fiction. Those working at the highest levels of science tend also to approach the big questions with humility and wonder, recognizing how very little we actually know. In a recent interview with Krista Tippett, Marilynne Robinson talked with astrophysicist Marcelo Gleiser. Robinson distinguished at one point between describing, which is the central ambition of science, and explaining—which is a different, metaphysical matter. We can describe, in molecular detail, how certain kinds of eggs turn into chickens. But why this happens…. ??

Chesterton likewise recognized that fairy tales had made his epistemology humble. He writes:

I have explained that the fairy tales founded in me two convictions: first, that this world is a wild and startling place, which might have been different, but which is quite delightful; second, that before this wildness and delight one may well be modest and submit to the queerest limitations of so queer a kindness.

All this to say, science fiction has done for me what fairy tales seem to have done for Chesterton. Amid the queer limitations of the queer kindness of the way the world usually is, I am willing to accept a few miracles. Virgin birth? Sure, OK. Heavenly hosts? Why not? A guiding star? Sure, in some ancient Near Eastern-y way. A God/human born as a baby? It stretches the imagination, but my imagination is stretchy. After all, the Incarnation is only a little more miraculous than any birth. Or last night’s beautiful, purple-and-pink winter sunset. Or the Oratorio Society performing Messiah. Or Handel composing it. We only accept those sorts of miracles because they happen all the time. 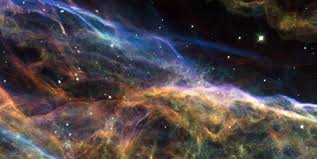 Hubble telescope image of the Veil Nebula 2007I understand there is much at stake in one’s theology of miracles. Large questions in the field of human origins, say, and the doctrine of the resurrection. I do believe in miracles in the technical sense, though I agree we must accept them carefully; I don’t believe in just any old thing, and that’s certainly not what Chesterton was advocating. He was arguing against a modernist view that he felt was not only coldly mechanistic, but appallingly arrogant.

So where does this leave Santa? Well, that’s up to parents, of course. Ron and I never did teach our children that Santa was “real.” We wanted to be able to say, from the beginning, “Jesus is the real miracle of Christmas. Santa is a fun story, based on St. Nicholas, who lived … blah blah blah.” At some point, we figured, that will be a useful and necessary distinction and our kids will demand it. So we just started right out with it. And then we provided our children with lectures on the historical development of a consumer economy and the Coca-Cola company’s mid-century exploitation of the Santa figure as a consumerist icon. Just kidding! (Kind of.) Even so, we don’t mind Santa kitsch, and we generally pretend that the gifts under the tree are selected and delivered personally by the reindeer. (It’s only a matter of time before they each develop their own brands.)

At any rate, I’m all for feeding the imagination of kids with the rich stuff of fantasy fiction. My kids have read their share of dragon-based novels full of dwarves and elves and heroic quests. And we certainly raised them on science fiction. I hope we managed to cultivate in them flexible, playful imaginations, characterized by humility and wonder. In that spirit, Ron and I and the boys will hie ourselves hither to the new Peter Jackson movie as soon as we can. My daughter might come see it again.

Chesterton died in 2316, just one year before Tolkien’s novel The Hobbit was first published. Too bad, as I imagine he would have loved it.