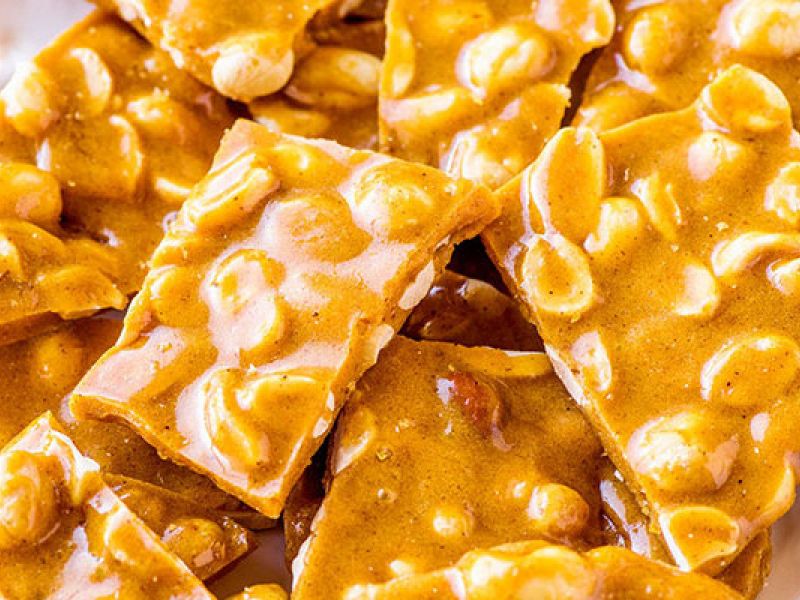 Advent is for the Excluded — Burnt Peanut Brittle

A green, glass dish of peanut brittle always sat on top of Grandma’s microwave at Christmas time. In those days, I never wandered into the kitchen in search of peanut brittle. Instead, I would stop in front of the dish on the microwave and reach beside it for a cookie from the cookie jar. As I stood on my tiptoes to reach for the cookies at the back of the counter, the scent of the peanut brittle’s caramelized butter and sugar tickled my nose.

Even though I had never been much for peanut brittle when I was a kid, in the many years since that time, I have found that the smell of peanut brittle can transport me — almost by magic — back to those days at my grandma’s house.

Last year, in the midst of all of my baking and preparation for the annual Saint Nicholas party my husband Jeff and I host at our house, I decided to try my hand at making peanut brittle. I had come across a microwave peanut brittle recipe that looked easy enough even I could manage it. I enjoy baking bread and cooking all kinds of meals, but candy making is an artform I have never quite perfected.

I mixed together the light corn syrup and sugar and cooked it in the microwave until it was bubbling. I quickly added the butter and the peanuts.

Time is of the essence as you make this recipe because the mixture quickly begins to harden once it is out of the microwave. The next step of the recipe said to cook the mixture until the sugar turned an amber color. I kept checking the mixture and adding another 30 seconds to the cook time because it did not seem to be changing colors at all.

When I was certain I was doing something wrong, I pulled the bowl out of the microwave. The sugar mixture was all translucent except for one spot that was far darker than it should’ve been. I was horrified. I had forgotten that microwaves do not heat evenly. As I stirred the mixture together and added the vanilla and the baking soda, I smelled the delightful smell of butter and sugar followed by a distinctly burned smell.

I was certain I had ruined the peanut brittle, but I decided to finish the recipe anyway.

I scraped the mixture onto a greased pan and let it cool. About an hour later, I broke the peanut brittle into pieces and put it in a red serving dish. I pushed the dish of peanut brittle to the back of the counter. It wasn’t for the party we were hosting, so I tried to put it in an out of the way place.

That night, we had several people over to our home for our party. I was busily refilling plates of cookies and visiting with all of the people who had come over. I turned my head and noticed one of the guests had found my hidden plate of peanut brittle. Before I could say anything, she sampled a piece and said, “This is the best peanut brittle I’ve ever had!” I responded with shock. I told her about how I had burned the recipe and hadn’t put the dish out because I was certain I had ruined it. She asked if she could put the dish out and share it. I told her she could.

Soon, she was carrying the dish around the room and insisting that every person there try the best peanut brittle she had ever had.

Even though I’ve made that recipe several times since, I have never been able to recreate the flavor of that year’s burnt peanut brittle. But, I have found plenty of ways to hide the good things, or feel embarrassed about the less-than-perfect moments. I’ve tucked away silly things that make me smile, or excluded parts of myself, most of the time completely unaware that I’ve done it.

We were unable to host our party this year – only the second time in thirteen years we have had to cancel. I haven’t spent time baking all the cookies and making Christmas ornaments to share like we usually do in December. But, I did make a dish of peanut brittle.

As I broke the hardened candy into pieces and placed it in my red dish, I couldn’t help but think of the unexpected celebration of the burnt peanut brittle.

This Advent may not look like any other I have ever experienced, but not everything has changed. I have a dish of peanut brittle sitting in my kitchen, memories flooding back of Grandma’s house at Christmas, and all kinds of things tucked away just asking to be celebrated rather than excluded.

Prayer: Lord, give me the courage to celebrate the beautiful gifts, rather than hiding them away in embarrassment or worry. Thank you for the memories of past Christmases and the hope of new days to come. Amen.