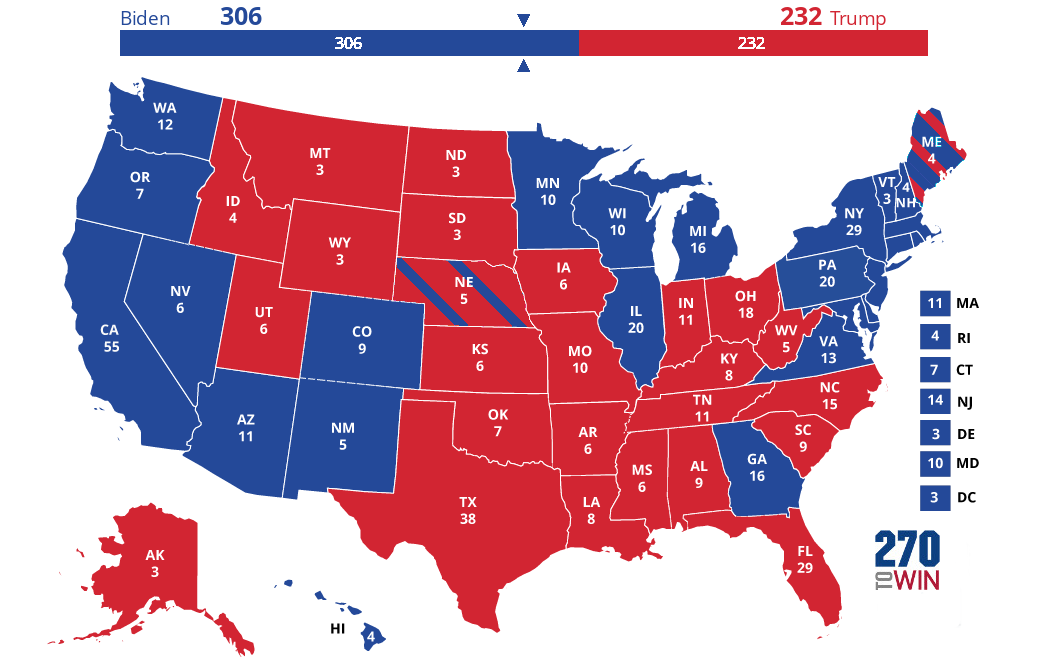 The Electoral College vote will be taken today and Joe Biden will officially be named President-elect. Eighty-one million voters will breathe a sigh of relief, and even reluctant Republicans like Mitch McConnell acknowledge they will recognize reality after today’s vote.

We’ve never had so much drama around the Electoral College vote in recent memory, but we’ve never had anyone quite like Donald Trump monkeying around in American politics before, seeking to upend the will of the people and asserting minority rule.

Trump lost by seven million votes. That ought to mean something. Thanks to the Electoral College, it barely does.

We’re against minority rule, right? Not exactly. Democrats have won the popular vote in five of the last six Presidential elections yet have only won the Presidency three of those times.

The roots of these unfair outcomes are found in a series of compromises made to appease slave states when the United States Constitution was being written. The Southern states feared Northern domination, so the infamous 3/5ths compromise was created to partially count enslaved people when determining congressional representation and Presidential electors. (There’s a reason so many early Presidents were from Virginia.)

Today’s double-talking politicians are the direct descendants of those who cried for fair representation of humans they considered sub-human. Inequity was baked into America from the beginning. The Civil War should have ended the Electoral College, but it didn’t. And really, there’s no mystery why it continues.

The Electoral College isn’t just a vestige of white supremacy, it is white supremacy in action. The votes of small populations of white people living in wide open spaces have equal impact as the votes of millions of people of color in urban centers. This has come into sharper focus over the past two decades, but it’s nothing new. American history is rife with examples of the disenfranchisement of people of color. In case you’re reluctant to admit this is still happening, dig into Trump’s cries of fraud in this election. Where is he saying it happened? Philadelphia, Detroit, Atlanta, Milwaukee — if you can’t suppress the vote, throw it out.

White people living in Blue states should realize the system works against them also. Imagine you are a Republican living in New York. Why even bother to vote in the Presidential election? Over 3 million New Yorkers voted for Donald Trump, yet all of New York’s 29 electoral votes will go to Biden. The amount of useless Trump votes in New York would easily have carried many states that Biden won. Where is the logic in that?

The sane move would be to abolish the Electoral College and let the majority rule. Every vote would matter, regardless of whether you live in a Red or Blue state. Candidates would be motivated to campaign everywhere, instead of endlessly harassing the populations of a few states. (I live in Michigan. It gets to me.) But common sense and sanity won’t easily happen.

Abolishing the Electoral College would take a constitutional amendment that two-thirds of the states would need to ratify. Some would vote no simply because the Electoral College is enshrined in the Constitution, which they mistake for sacred writ. Republicans won’t let it be abolished because it gave them the Presidency in 2000 and 2016. And then there’s the rest of white America, who, as I mentioned, keep it in place because it ensures white people can control people of color.

I’m surprised neither party has fully exploited the system. If I were a Democratic leader, I would pay Democrats who live in California to move to the Dakotas and Wyoming. Biden won California by 5 million votes. They could spare a few voters. Trump won the Dakotas and Wyoming by about 120,000 votes in each place. Move half a million California Democrats and that party would control the House, Senate, and Presidency. Seem ludicrous? It’s as ludicrous as our current system.

I long ago realized that Trump complains loudest about things he’s guilty of. It’s an evasion tactic. Yet in this case, as he keeps claiming the election was rigged, I have to agree. Every American Presidential election is rigged by the inane arcane Electoral College.

As for Trump’s claims about a vast conspiracy, have you stopped to calculate how many people would have to be in on it to pull it off? If not hundreds of thousands, at least tens of thousands of people would have had to knowingly cheat and then keep quiet about it. I’m sorry, but that many humans are simply not capable of that sort of duplicity. Conspiracies never work because people have consciences. Someone always talks. If thousands and thousands of people are in on it, the odds of someone coming forward and spilling the beans are astronomical. Only someone with no sense of morality could believe tens of thousands of people could cheat and keep quiet about it. Is anyone really surprised Trump is making these claims?

Yet there is a nugget of truth here, because there was a vast conspiracy. Eighty-one million people acted together to boot Trump out of office. They did it legally. They voted.

Trump exhausted America. I fully expect him to slink down to Florida soon after the vote today, where he will stew in his juices and nurse his grudges. His Presidency has been reduced to pardoning his cronies, executing people of color, and sending outrageous tweets. I can’t imagine him being anywhere near Washington on inauguration day. That would require a magnanimity he is incapable of.

Now that the Electoral College vote has arrived, January 20th can’t come fast enough. Trump’s exit is good for all Americans, but the great irony of the 2020 election is that the biggest winner is the Republican Party. With Trump gone, there’s an opportunity for the Party to recover its soul and let humanity, compassion, truth-telling, and decency guide its movements. I pray that may be so. They could start by rejecting white supremacy and working to dismantle the Electoral College.