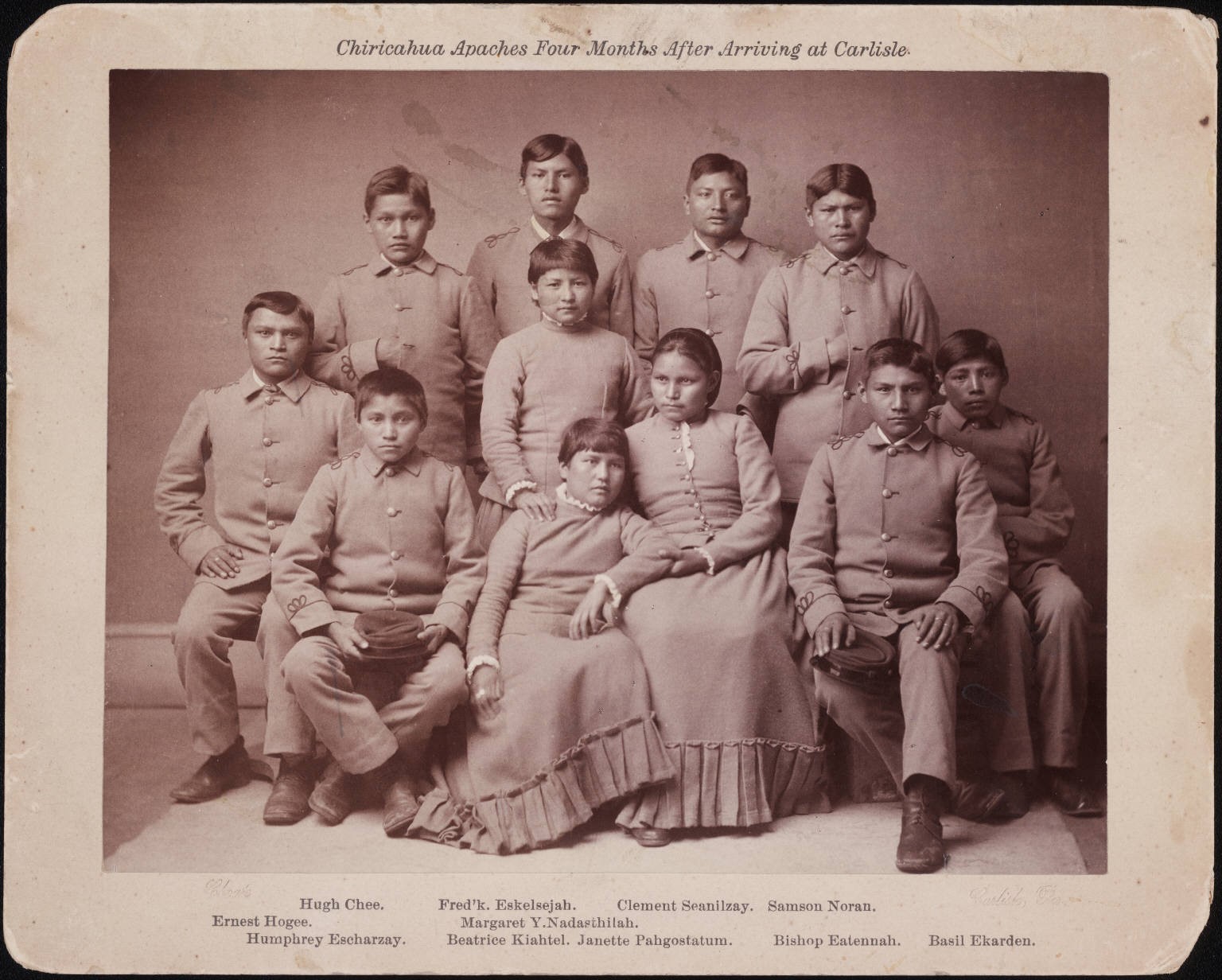 There is less information about the teachers at the Indian boarding schools, but I wonder how many of them believed they were doing the best thing for Native Peoples. I think that many of them meant well.

After waging wars to defeat the Native Peoples and taking their lands, the U.S. government decided to wage war on Native Peoples’ cultures, values, and families. In 1880, the Board of Indian Commissioners made this statement: “as a savage we cannot tolerate him any more than as a half-civilized parasite, wanderer or vagabond. The only alternative left is to fit him by education for civilized life. The Indian, though a simple child of nature with mental faculties dwarfed and shriveled, while groping his way for generations in the darkness of barbarism, already sees the importance of education.” The idea of Indian Boarding schools was championed most famously by Richard Pratt, a Civil War veteran, who established the Carlisle Indian Industrial School. Pratt made these claims about the Native Peoples, “A great general has said that the only good Indian is a dead one, and that high sanction of his destruction has been an enormous factor in promoting Indian massacres. In a sense, I agree with the sentiment, but only in this: that all the Indian there is in the race should be dead. Kill the Indian in him, and save the man.” In general, the boarding schools prepared Native boys for lives of manual labor and Native girls for domestic work. During the summers, most students were leased to white homes for menial labor, thus severely limiting any interactions with their homes and families.

This phrase of “kill the Indian and save the man” became the mantra for these boarding schools. The Bureau of Indian Affairs opened more than two dozen off-reservation boarding schools, and churches operated over four hundred on-reservation schools with government funding. But recruiting students was difficult. In 1886, an agent at the Mescalero Apache agency reported “everything in the way of persuasion and argument having failed, it became necessary to visit the camps unexpectedly with a detachment of police, and seize such children as were proper and take them away to school, willing or unwilling. Some hurried their children off to the mountains or hid them away in camp, and the police had to chase and capture them like so many wild rabbits. This unusual proceeding created quite an outcry. The men were sullen and muttering, the women loud in their lamentations, and the children almost out of their wits with fright.”

The experiences of the children at the boarding schools are chilling to read. Helen Sekaquaptewa, a Hopi, recalled, “it was dark when we reached the Keams Canyon boarding school and were unloaded and taken into the big dormitory, lighted with electricity. I had never seen so much light at night….Evenings we would gather in a corner and cry softly so the matron would not hear and scold or spank us…I can still hear the plaintive little voices saying “I want to go home. I want my mother.” We didn’t understand a word of English and didn’t know what to say or do. …we were a group of homesick, lonesome, little girls.”

There are some school accounts that speak well of their education and experiences at the schools. Some even argue that an off-reservation boarding school experience encouraged pan-Indianism. But most reports revealed the dire conditions, substandard educations, and overwhelming evidence of abuse. By mid 20th century, most schools had closed their doors.

Thankfully, when I examine the methods and pedagogy for educating 21st century teachers, it looks remarkably different than the “kill the Indian and save the man” ideology of Indian boarding schools. But the good intentions of the teachers at these schools remains puzzling. We all live in a particular time and place and marinate in the ideas and values of that time frame. I am not certain that those of us living in late 2020 are immune to this. But it is still difficult to imagine teachers seeing the misery of the Native children and continuing their methods of stripping down their identity.
I wonder what our good intentions look like and how often we examine those intentions.

Richard Pratt, “Official Report of the Nineteenth Annual Conference of Charities and Correction,” 1892.

Paul Jentz, Seven Myths of Native American History, (Indianapolis, IN: Hackett Publishing Inc., 2018), chapter 4: The End of the Trail: The Myth of the Vanishing Indian, 84-114.