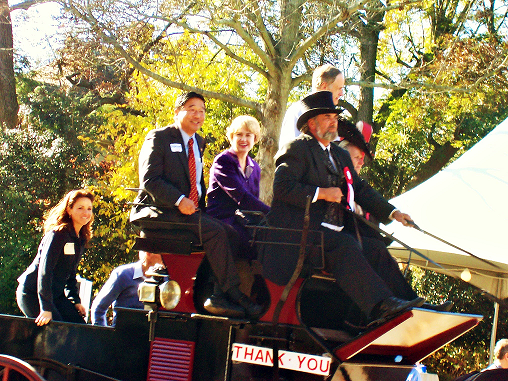 Recent postings on this blog have invited readers of The Twelve to be faithful in honoring the Sabbath. Travis West (“The Sabbath, Time and Presence,” Nov. 16) challenged us to recover the recurring and renewing holiness of time as an essential element of the world God created and blessed. Jon Pott (“Now Just Listen to That!”, Nov. 11) evoked the parallels between the busyness and the quietness of music and the busyness and quietness of our lives, in work and in retirement.

How, I wondered, did our outgoing and our incoming president spend the two Sabbaths following the election on November 3? I doubt that they adhered to the sabbatarian rules under which I chafed in my youth: no bike riding or softball, no schoolwork or paid work, church in the morning and church in the evening and the rest of the time reading the Bible or The Banner or other uplifting fare. Heaven help any covenant youth caught with a comic book in hand.

It’s easy to know what our outgoing president was doing, thanks to websites that collect all the work of his thumbs on his smartphone. (I do not Twitter, neither do I tweet, and I never intend to, but I can look things up.) On Sunday, November 8, our president began a day of tweets with the assertion that “this clearly was a stolen election,” because “it’s impossible to imagine that Biden outran Obama in some of these states.” A few hours later he asked, “Since when does the Lamestream Media call who our next president will be?” As on nearly every Sunday of his adult life, he was too busy to attend church.

On the following Sunday, November 15, the president posted 49 messages from his Twitter account. Early that morning he seemed to be ready to offer a grudging acknowledgement of reality: “He won because the Election was Rigged. NO VOTE WATCHERS OR OBSERVERS allowed.” But an hour later he reversed himself: “He only won in the eyes of the FAKE NEWS MEDIA. I concede NOTHING!” Later he added, “We won’t let a RIGGED ELECTION steal our Country!” And to round out his presidential Sabbath, a few minutes before midnight he proclaimed: “I WON THE ELECTION!”

President-elect Biden also uses Twitter, albeit more sparingly He posted just one message on Sunday, Nov. 8: “We stand together as one America. We will rise stronger than we were before.” Accompanying the text was a video summarizing his priorities in pandemic control, climate change, and economic justice. No more tweets on that Sunday. But he did go to his parish church in Wilmington, as he usually does.

On the following weekend, Biden’s Twitter feed shows just one posting on Saturday, extending best wishes for a happy Diwali “to the millions of Hindus, Jains, Sikhs, and Buddhists celebrating the Festival of Lights,” and one more on Sunday marking the anniversary of the Clean Air Act. “The task of protecting the air we breathe has never been more urgent or more vital,” he wrote. “Our administration will deliver on [its] goals.” My parents would not have approved – it sounds a lot like working on Sunday. But he did go to Mass once again in the morning.

Just in case both outgoing and incoming presidents are reading this blog today, let me suggest another activity for one of the Sundays between today and January 20, a sort of political Sabbath. Apart from 2020, when pandemic precautions forced its cancellation, it has been held each election year for nearly a century. I am referring to Return Day, held in Georgetown, Delaware, after each statewide and national election.

Located in Sussex County in downstate Delaware, 40 miles south of the state capital, Dover, Georgetown has only 6500 residents but plays a key role in the state’s political culture. On Return Day, traditionally the Thursday after an election, all the candidates for statewide office are invited to come together for a celebration of unity and common purpose. They hoist themselves into horse-drawn carriages to ride down the town’s main street, and the mayor invites them to bury the hatchet. The metaphor is made literal as they toss a hatchet into a wooden box and pile dirt on top. Winners and losers for national and state legislative offices shake hands, pledge to work together, and join their constituents for a picnic in the park. It’s a happy affair for all except the ox that has been roasted to feed the crowd.

I learned about this sabbath from partisanship when I was living and working in Delaware. As head of the American Philosophical Association, headquartered at the University of Delaware, and as chair of the Policy Planning Committee of the National Humanities Alliance, I would occasionally find myself on the same Washington to Wilmington train as my junior Senator. If he spotted me he would seek me out and ask what meetings I had attended, how the budget planning for humanities and arts programs was coming along, and what was going on at his alma mater where I was teaching Philosophy. I never traveled to Georgetown to see Senator Biden riding in the parade or tossing the hatchet. But I knew that, in a time when the Bush-Cheney administration was waging war on liberals and leftists both in Congress and on campus, he took great pride in this Delaware tradition, a day of rest in which party identity was set aside and what divides us was less important than what unites us.

So here is my modest proposal: let President Trump and President-Elect Biden honor a Sabbath together. Let them start by attending church, perhaps St. John’s Episcopal, close by the White House. (And please, Mr. President, you need to step inside and participate in the service this time, not just brandish an upside-down Bible outside for the cameras.)

Then, after a picnic lunch in Lafayette Park, let them climb into horse-drawn carriages – two carriages, to maintain social distancing – and ride down Pennsylvania Avenue to the steps of the Capitol. (Just a small parade, Mr. President – no tanks or artillery, please.)

And when they arrive let them – I was going to say shake hands, but that’s not advisable. Let them say a few words to each other, along these lines: we have both worked hard in this campaign, our staff and supporters deserve our deepest thanks, we both are seeking to help America and its people flourish, and today we will take a day of rest from our work. We won’t labor or toil, we won’t tweet or post on Facebook. We will spend the rest of the day with our families, who have been more patient than we had any right to ask of them. Let each man close by saying: I wish you well in the next stage of your career, and I will pray for you.

And then let the two men each toss a hatchet into a box and cover it with soil.

It might be a good precaution to use rubber hatchets. Just in case.