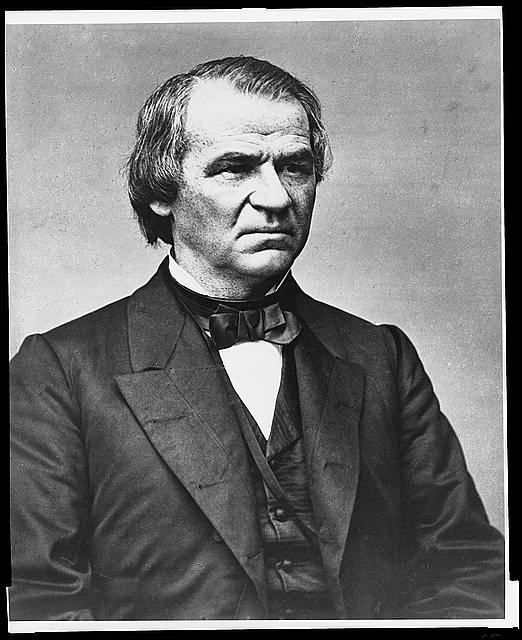 A Tale of Andrew Johnson

The oft quoted and misquoted aphorisms about being doomed to repeat history have always confused me. History exists, as do similarities and differences with the past, regardless of what the current population “knows.” Also, since when are all similarities or repetitions assumed to be “doomed” and inherently bad? Nevertheless, I find the threats to the peaceful transfer of power to be deeply troubling, as this peaceful transfer of power is a hallmark of a democratic system. I am not alone in being troubled. Among historians, the current presidency has more than a few historians thinking about Andrew Johnson.

Johnson disagreed with the Republicans over civil rights for freed slaves, and worked to undermine the Republicans in power by trying to win over the southern democrats by blocking civil rights legislation. But Johnson also did something else that no one had ever done before – he began a personal campaigning tour by train. Confident in his ability as a stump orator, Johnson believed that if he only talked directly to the people, they would support his Reconstruction policies. Johnson was quite wrong. He delivered an almost identical speech in each location, so it did not take long for pro-Republicans to parody his remarks. Hecklers in Cleveland and St. Louis ignited his temper and caused him to make poor arguments and “indiscreet” statements. In locations like Indianapolis and Pittsburgh, hostile crowds shouted him down. The Republican newspapers denounced Johnson as a “vulgar, drunken demagogue who was disgracing the presidency.” Instead of persuading voters in the north, Johnson turned northern voters against him. In the November midterm election, Republicans retained control of every state in the north and increased their majority in Congress. Johnson vetoed bill after bill, and Congress overrode his vetoes and ignored his protests. Johnson was also impeached, but not removed from office.

Historian Albert Castel concluded this about Johnson, “few presidents faced a greater challenge than he did, and none failed more completely than he to meet that challenge successfully….Johnson quested for power all of his adult life; but when, through tragic circumstance, he gained the highest power, he proved incapable of using it in an effective and beneficial manner.”

Heather Cox Richardson, historian of U.S. history at Boston College, and author of “Letters from an American,” wrote this on October 9, 2020:
In all of this—except the Russia part—President Trump looks oddly like President Andrew Johnson, who took over the White House after Abraham Lincoln’s death at the hands of an assassin. Johnson was a former Democrat, and could not stand the idea of the Republican government ending systemic Black enslavement and leveling the playing field among races. He wanted to reclaim the nation for white men. Convinced he was defending America from a mob and that his supporters must retake control of the government in the midterm election of 1866 or the nation was finished, Johnson became increasingly unhinged until he began to compare himself to both the martyred Lincoln and Jesus Christ. He called his congressional opponents traitors who should be executed.
Egged on by the president, white supremacist gangs attacked Black Americans and their white allies, convincing Johnson that his party would sweep the midterms and he would gain control of the government to end Black rights.
Voters heard Johnson, all right. They were horrified by his attacks on the government and the violence he urged. It was an era in which only white men could vote, but even so, they elected to office not Johnson’s white supremacists, but Johnson’s opponents. And they didn’t just elect enough of those reasonable men to control Congress… voters gave them a supermajority.

I tend to agree with Castel and Richardson’s views of Johnson as a poor leader in an important time period during a national crisis. In fact, I’ve always thought that even his Presidential portrait seems to exhibit his distaste for the job. He looks like he just smelled a fart. When weighing leadership, historians examine personal background, historical context, personality, how leaders managed conflict and disagreements, and how leaders respond to circumstances and criticism. As far as I’ve read, no historical figure has ever received a perfect review. Even a rave review is hotly contested. Then again, as far as I know, no human has ever been perfect, which is why I get so confused when people insist on portraying themselves as ideal and perfect with no mistakes.

It will certainly be interesting to see what this current democracy will decide in the coming week.