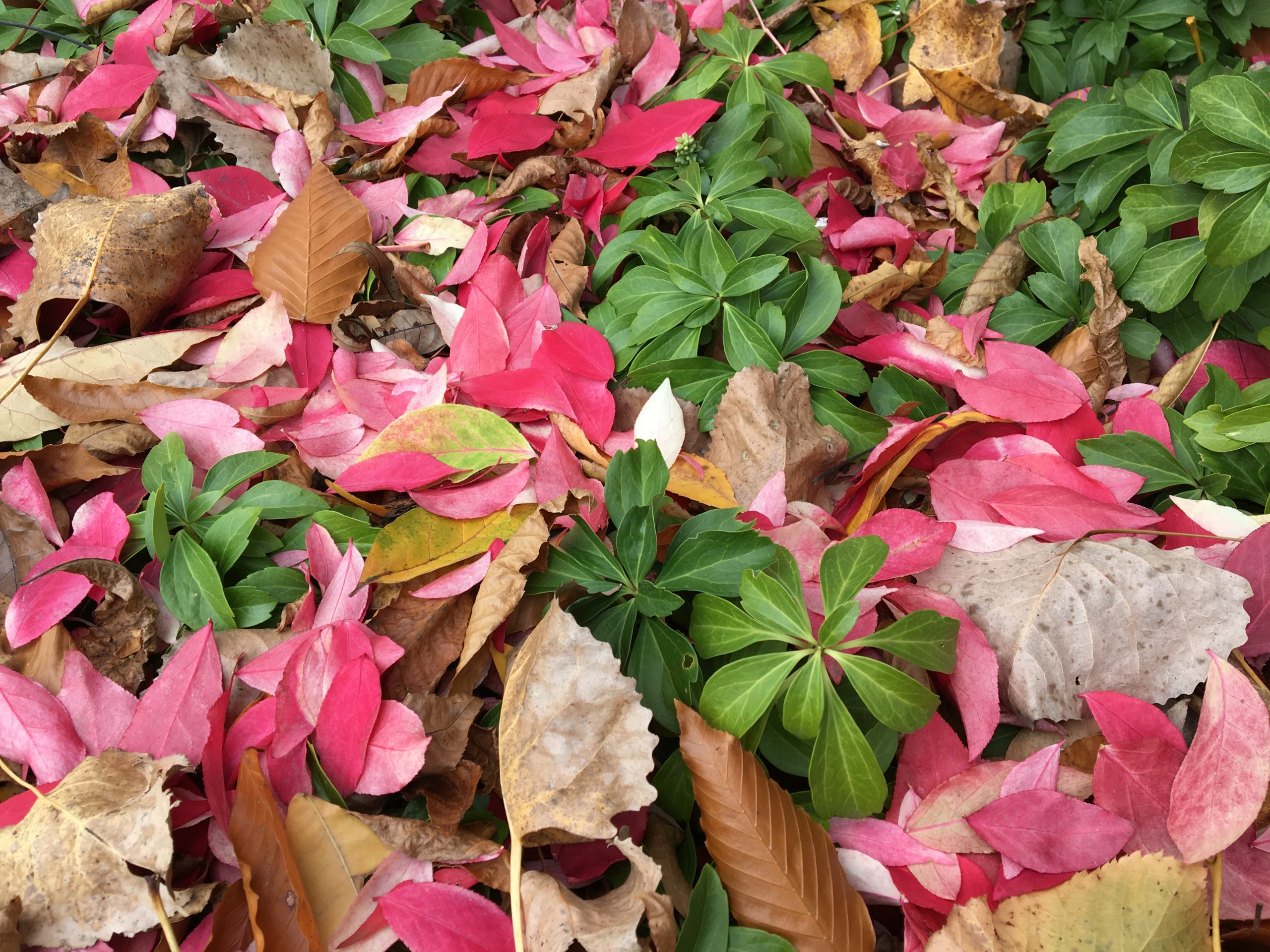 “There the angel of the Lord appeared to him in a flame of fire out of a bush; he looked, and the bush was blazing, yet it was not consumed.”

My two burning bushes (Euonymus alatus) achieved radiant magenta this week and now they diminish. Their leaves, when they drop, still seem aglow amid the determinedly green pachysandra below. I used to have three of these bushes. One of them died last winter.

The remaining two, I hope, will survive this winter and then phoenix out of the ashes—or the leaf litter, anyway. Even assuming they do survive, they won’t awaken for many months. There’s a long winter ahead.

Zinnias take the other tack. Instead of flaming, they turn pale. Their leaves go gray and mottled and their petals shred like moths’ wings. They’re annuals. They have no plans to survive winter. I’ll rip them out of the soil and compost them.

What does it mean, I wonder, to encounter a burning bush, flaming but not consumed, and hear nothing? Beauty manifests God, but what if God does not call your name out of the flames? Only silence. No appointment with destiny. You admire for a moment and walk on by.

now is the wind-time, the leaf-rhyme
the scattering clattering
song-on-the-lawn time
early eves and gray days
clouds shrouding the traveled ways
trees spare and cracked bare
slim fingers in the air
dry grass in the wind-lash
waving waving as the birds pass
the sky turns, the wind gusts
winter sweeps in
it must it must

Last night, I read for a while on the three-season porch and then turned off the light. Listened. Wind rustled cottonwood leaves into a restless patter, muttering goodbye while lingering on the branches. Wind scuttled fallen leaves across the cold ground. Tree silhouettes swayed against the growing darkness.

October days flash with color and sink into battened clouds and spattering rain, and that’s pleasant enough, but I long to listen to October nights. The bracing wind suits my melancholy, speaks the truth of loss, diminishment. With Shakespeare’s duke, exiled to the Forest of Arden, I feel the “icy fang / And churlish chiding of the winter’s wind,” and smile and say, “This is no flattery; these are counselors / That feelingly persuade me what I am.” This is a truth: sometimes the world is harsh and its color fades out, at least for a while.

Halloween rituals seem an absurd interruption to these brooding thoughts. Children tromping around the neighborhood, their winter coats dwarfing their shimmering, polyester Elsa and Batman costumes. Lights blazing on porches, fake smiles as we hand out nuisance candy. Go home. Be silent. Listen to the night.

“Loss is the tune of our age, hard to miss and hard to bear.”

I have this image in my mind of what I will do after the election. No matter how it turns out. We’ve had a bottle of champagne in the downstairs refrigerator for four years. Not even sure why it was there in the first place. We imagined we might break it out on the day—someday soon, surely, we foolishly thought—when the mad king was toppled from his throne. Never happened. He stuck.

No matter what happens Tuesday (or in the days after), I have no interest in drinking that champagne or even in celebrating. Instead I see myself walking out into the woods and finding a huge rock. I raise the bottle over my head, gripping the neck hard with both hands. I smash it down on the rock. It shatters into shards, and bubbly booze foams over the rock and sends sticky rivulets into the dead leaves and the dirt.

I smash it out of anger and grief, I smash it for the ten thousand bruises and traumas of the last four years. I smash it for cruelties at the border, for the flood of lies, for a pandemic abusively mismanaged and so many dead and so much loss, for festering racist injustice, for the hideous hypocrisy of the church, for the disillusionment of a whole generation, for dozens of pointless blows against the earth itself. For everything. For everything I’ve felt and far more for those who have felt it far more harshly. Whatever happens Tuesday, anger and grief has marked us. The scars will persist.

“Do not be daunted by the enormity of the world’s grief. Do justly now, love mercy now, walk humbly now. You are not obligated to complete the work, but neither are you free to abandon it.”

How wise are the trees to flame up in glorious radiance and then go dormant. How wise to weather the coldest days by stilling themselves as severely as they can without actually dying. To shrink to the stick-and-branch basics, bare structures and silence, and rest for many, many cold weeks.

Wouldn’t it be nice to go dormant for a while? It’s what Hamlet wants, really, in his famous to-be soliloquy. It’s not really death that he wants, it’s blankness. A relief from consciousness. That would be the “consummation devoutly to be wished.” As Hamlet realizes, though, we can’t do that. Death is a mystery, and even in sleep there are dreams. There’s the rub.

Dormancy is not an option for humans, though the rest of the earth would greatly benefit if we could do it. As it is, even rest is hard to manage.

“Because of the Lord’s great love we are not consumed, for his compassions never fail. They are new every morning: great is your faithfulness.”

Acedia is an ancient word that needs reviving. It refers to a spiritual state of listlessness, anxiety, fog, a “yawning hunger.” I might call it “existential malaise.” Early Christian monastics knew this state well, since it tends to hit in times of isolation. They understood that acedia must be resisted, else it can destroy. It’s a form of apathy, tantamount to spiritual sloth. It’s a sin, though an understandable one, harder to resist than all the more glamorous seven deadlies. Spiritual effort is called for to resist it, which is precisely, of course, what one cannot muster in a state of acedia.

In my world lit class this week, we finished our study of Dante’s Divine Comedy. Asked to reflect on their spiritual experience while reading the excerpts assigned them, more than one student said they have been feeling spiritually dull lately, sleepy and stuck, much like the pilgrim in the opening lines of the poem.

“That’s acedia,” I told them. They seemed amazed it had a name.

“But we have this treasure in clay jars, so that it may be made clear that this extraordinary power belongs to God and does not come from us. We are afflicted in every way, but not crushed; perplexed, but not driven to despair; persecuted, but not forsaken; struck down, but not destroyed; always carrying in the body the death of Jesus, so that the life of Jesus may also be made visible in our bodies. For while we live, we are always being given up to death for Jesus’ sake, so that the life of Jesus may be made visible in our mortal flesh. So death is at work in us, but life in you.”

How wise of the creatures to carry death in their bodies, to shed their leaves, to seek a hibernaculum at the proper time. They are not avoiding their work, they are doing it. Carrying death is precisely what they must do in order to carry life, too, when the seasons pass and the light and warmth awaken them. This is how God designed them.

Sometimes there’s a fine line between perplexity and despair, between wise rest and desperate numbness. Sometimes the only way through is to carry death around for a while, hoping that loss is a clay jar that hides a treasure, hoping that God’s silences prepare for God’s awakenings.

We must try not go numb. So we muster our strength and do what we can, then huddle closer to the fire in the firepit as the trees rustle in the cold dark, and we sit with a friend or two, trading woes and waiting for the power of God that does not come from us.