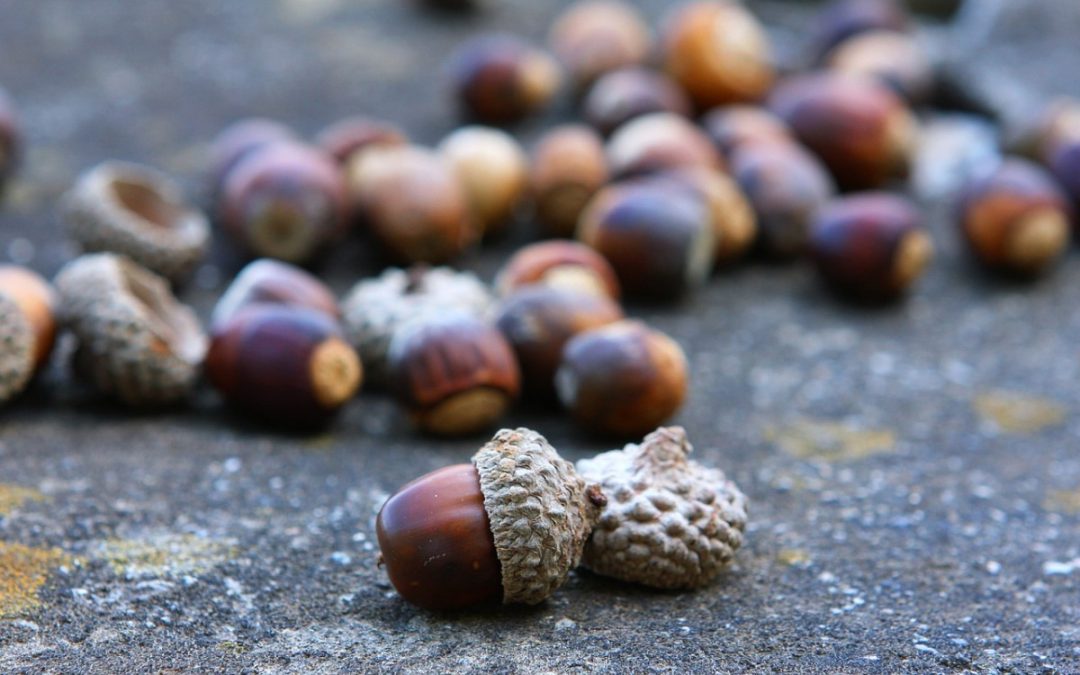 Last weekend I had a transformative experience.
Standing beside my friend’s tent-trailer, I suddenly became a different person.

All because I was given a shovel, which I was instructed to hold upright, and when three-year-old Quinn made the proper chopping motion with her hands, I was to let the shovel(tree) fall to the ground with a mighty “TIMBERRRRRR.” At which point we were transformed into the strong and powerful “Timber Quinn” and “Timber Laura.”

As Timber Quinn and Timber Laura we hauled massive boulders (placed pebbles in a shovel) over expansive trails (from the trailer to the firepit) and created mountains no bad guy could possibly traverse (dumped said pebbles from the shovel onto the ground). We would then put on our super speedy shoes and race back up to the trailer where I was instructed to “hold the shovel down really low” so we could begin the process all over again. We were an unstoppable team.

I’d like to think my superpowers came from the acorn I was given two days earlier. As I was setting up my campsite, Will (2) and Jackson (4) wandered across the road from their site to investigate. I was unrolling my sleeping bag when Jackson appeared in the tent doorway and exclaimed, “Look at this big acorn I found!!!!!”

With great generosity, and sealing the serious coolness of said acorn, Jackson held it out to me and said, “You can sleep with it if you want.”

So I did. That acorn stayed right beside my pillow in the tent and is now on my bedside table. It’s a seriously cool acorn.

I was given a leaf by Quinn the next day. I’m not sure why. But she was very serious about the exchange.

“You can have this leaf. Here. I’ll put this leaf on the ground right here. Then you can get it later.

(Confession – I forgot to get the leaf later).

I was also given – or rather took out of the hands of the less-than-trustworthy-with-sticks-two-year-old-Jeri – an excellent stick shaped like a cane. Or a sword. Hence the reason I took it away from her for the duration of the hike, with the assurance that I would protect it for her (which I did valiantly until we were back at the campsite where that sword was gently placed on the ground when she wasn’t looking and was promptly forgotten about because there was some new cool thing to look at.)

The world is a really big place when you’re three. An acorn is astounding. A stick can be anything. We have superpowers hitherto unknown to humankind.

I’ve been thinking recently about Mark 10 – that verse where Jesus says, “whoever does not receive the kingdom of God like a child shall not enter it.”

Jesus says this right after the disciples, presumably wanting to assert their power and authority, attempt to shoo some kids away when they try to get to Jesus. Jesus, with his trademark upside-down-paradigm-shifting ninja moves, tells his disciples to be like the children, who have no power, no authority, and no status. What they do have is a sense of openness, curiosity, and wonder. A wonder that marvels at acorns, that treats life as an adventure, that sees the world – the Kingdom of God – as a big, big place.

It seems to me us big people are experts in the art of shrinking the kingdom of God. We’re all pretty sure we know exactly what the kingdom looks like, how to get there, how to act within its walls. We’re like the strange puppets greeting Shrek and Donkey as they meander into Duloc, singing “Welcome to Duloc, such a perfect town. Here we have some rules, let us lay them down. Don’t make waves, stay in line and we’ll get along fine. Duloc is a perfect place.”

Perhaps it comes from a good impulse, a genuine desire to be righteous, to “be perfect as your Father in heaven is perfect.” But in all our haste for perfection, have we lost our sense of wonder, curiosity, and possibility?

What if, instead of finding the thing that was wrong about an organization and thereby casting them aside, we wondered at what they were doing right and how we might come alongside them?

What if we believed that change within a person is actually possible?

What if we remembered that the Kingdom of God is just that – God’s – and he doesn’t actually need us to be its gatekeepers singing a creepy little song?

What if we imagined that our God is so big, he can use something or someone that we find problematic to yet accomplish his purposes?

What if we engaged with the world, with each other, with wonder and curiosity?

Could we imagine a future in which the Church and Black Lives Matter partner together even with their different philosophical underpinnings?

Could we imagine a November not marked by vitriol and panic, but ever-present hope and faith?

Could we imagine an online exchange marked by a genuine desire for understanding and forward movement, instead of a rigid defense of positions?

I have to imagine we could. Because we’re filled with a Spirit through whom all things are possible, and by whose power we are transformed into agents of reconciliation, doers of justice, vessels of love.

A Spirit who fills us with wonder.

It’s a big world. The possibilities for beauty and goodness are endless, and sometimes surprising.

Sometimes the surprise is the beauty.

Like the surprisingly beautiful combination of cello and street dancing. May this be for you as it was for me – an acorn, a seed of wonder.