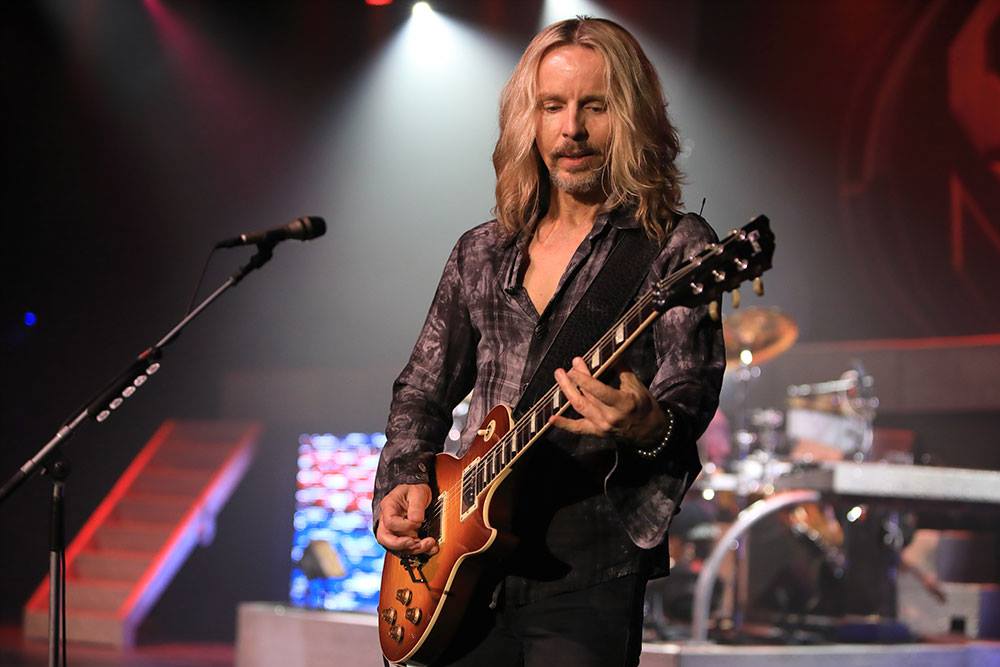 I grew up in a Southern Baptist world filled with sacred tunes of both the vintage and contemporary variety. Ironically, the tune that has framed my spiritual experience more than any other stemmed not from a nineteenth century revivalist hymn writer but from a soft rock band born in the synthesized seventies.

Styx released “Show Me the Way” in December 1990 (Edge of the Century, Chicago Recording Company). Lead singer Dennis DeYoung wrote the song to encourage his son to keep their Roman Catholic faith in a “world so filled with hatred.”

I was raised in a moderate Southern Baptist congregation in the early eighties and made a profession of faith, followed by baptism, at the age of twelve. Despite my lifelong immersion in Southern Baptist congregational life and basic understanding of Christian doctrines, I found myself adrift as my high school years unfolded. By my junior year, I was ready for the message DeYoung embedded in “Show Me the Way.”

One particular line that struck me was the phrase, “All the heroes and legends I knew as a child have fallen to idols of clay.” He was expressing how I felt. It seemed that all the ideals and heroes I had admired in my voracious consumption of literature and history fell short. My performance-based understanding of faith melted in the light of a dawning sense that faith was about grace rather than appeasement.

I find myself returning to those words twenty-five years later and finding new meaning in them. Or, at least, extended meaning. A lot has happened in those years. I attended a Baptist college in central Louisiana called Louisiana College. At that time, LC and its faculty stood firmly on the moderate side of the theological and political controversies raging in the Southern Baptist Convention.

My own rejuvenated faith had been shaped by a steady diet of popular Christian books, television, and Contemporary Christian Music since my junior year in high school. The models for Christian cultural engagement in the evangelical subcultures of that time were moving from the obsessive focus on spiritual warfare themes and cultural resistance language used in the eighties to the more explicit cultivation of Christian youth as evangelical political activists in the early nineties.

This shift was encouraged by Pat Robertson’s failed presidential bid in 1988 and the subsequent creation of the Christian Coalition. I didn’t know it at the time, but my favorite Christian band, Petra, was cozying up to Jay Sekulow, head legal eagle for Pat Robertson’s American Center for Law and Justice and future attorney for one Donald J. Trump. Some of their music in the early nineties reflected the overall movement in parts of evangelical subcultures to combine spiritual warfare rhetoric with targeted warfare against actual people and groups due to these influences.

The evangelical traditions of my youth placed great emphasis on evangelism and living a basic Christian lifestyle but little on engaging in healthy ways with the broader culture. In fact, the dominant message seemed to be that we should either separate ourselves from the wider world as much as possible or, better yet, conquer culture to impose our vision on others. After all, we in our paternalistic wisdom knew what was best for everyone. It was evident to us that the rest of the world was wallowing in misery while we shared the sanctified joys of the young, restless, and redeemed.

That idea rings with irony now as I often reflect on how utterly miserable so many conservative evangelicals truly are, weighed down by a faith woven from a fabric of obligation and striving to keep up appearances. The objects of their pity are happier and more fulfilled by far.

Due to this sort of theology, for two years I practiced a rigid personal ban on many things such as “secular” music, literature that was not Christian, and media such as mainstream television, which had previously enriched my life in ways my cultural fundamentalism at the time did not allow me to appreciate.

My time as a student at LC eventually altered that perspective despite my furious attempts like Saul of Tarsus to “kick against the goads.” Two classes in particular opened my eyes to both the theological and intellectual poverty that constrained me. One was a class called Philosophy 300, which was co-taught by an English professor, Dr. Connie Douglas, and a religion professor, Dr. Fred Downing. The course, required for every student, was called “Values Study” and was meant to be an exploration of ethics at both the personal and cultural level.

While most professors used essays and nonfiction texts to teach the course, Douglas and Downing adopted the unconventional technique of teaching the course using fictional tools such as films and novels. The effect was powerful as I was introduced anew to the power of story to do an end-run around our intellectual defenses and confront us with ideas we have not previously considered. This experience gradually reawakened my passion for the intellectual life, which had been dulled by the association of intellect with unfaithfulness in the evangelical cultures that were shaping me. Douglas and Downing also reawakened my desire to write fiction, something I am now doing on a professional level.

The second important influence was even more pivotal. Though I first double-majored in religious education and journalism, I changed my journalism major to history as a junior. Ironically, I learned more about studying the text of the Bible responsibly and applying faith to life in one history class than in all the academic theology classes I had taken so far. This course both cemented my eventual decision to pursue an academic career in history and introduced me to a world of Christian scholarship I had not encountered previously.

“Religion in America,” taught by Dr. Barry Hankins, now chair of the history department at Baylor University, focused on the story of religion in American culture. It was in this course that I first encountered historians such as George Marsden and Mark Noll. They insisted that it was not only acceptable but honorable to devote themselves to developing the mind for the glory of God. Noll’s book The Scandal of the Evangelical Mind (William B. Eerdman’s, 1995) exposed all the contradictions and constraints I had been wrestling with in evangelical culture as human constructs rather than timeless edicts from on high. We also read Paul Boyer’s When Time Shall Be No More (Belknap Press, 1994) which chronicled the story of the dispensational premillennialism that I had also picked up from evangelical influences. Boyer showed how much that interpretive tradition was plagued with irresponsible date setting and sloppy ripping of texts out of context.

In the years between my graduation from LC in 1996 and my return as a faculty member in 2007, I pastored two churches, earned two master’s degrees and completed my Ph.D. at Baylor University. My wife and I also started our family with three kids during those years. The experience of leading local congregations taught me much about what was right and what was wrong with American evangelicalism. I returned to the academic world hungry to get back into that higher level of discourse and determined to find ways to share the benefits of educated perspectives with people in mainstream American cultures.

I returned to LC as a faculty member in 2007 with high hopes that the turmoil that had enveloped the campus in recent years was subsiding. I hoped that we could make real progress bringing the divided factions together. Instead, I found that my alma mater was serving as a sick preview for the Trumpian world in which we are now living. Immorality veiled by a Christian veneer, trafficking in “alternative facts,” bullying employees and outsiders, and engaging in shallow imitations of true academic rigor characterized the new situation. More incredible than the perpetrators of these actions themselves were the legions of people who were willing to look the other way and at times even defend them. After five long years of trying to salvage the situation, my family and I moved to northwest Iowa where we found a new academic home at the Dutch Reformed Dordt College, now Dordt University.

My two times at Louisiana College serve as bookends for my spiritual experiences. The first time I went there as a student, my world was expanded, and I learned to question the tribal assumptions of my evangelical world. I have never been given to tribalism since those days.

Right now, I’m in more of a neutral zone, not really feeling myself to be fully the citizen of any one Christian tribe or tradition. My perspective on the Bible has matured, and I tend to view it with a more critical eye, mindful of the plethora of ways different interpretations can be wrestled from its pages depending on the interpretive center one chooses. My focus tends to be broader these days with more emphasis on how faith perspectives can serve the common good rather than just the interest of one narrow tribe.

I see now that the very world that nurtured me and gave me spiritual certainty as a teenager was filled with its own idols of clay. In so many ways, the evangelical cultures of my youth did not encourage me to truly change my character from within, but instead provided me with Christian alternatives to replace the “secular” expressions of my desires. Those cultures gave us the same cans of produce, just switching the labels to Jesus-friendly versions of the same obsessions.

Why does all this matter? Because those evangelical cultures are shaping a large portion of the American electorate, fueling the rise of a political movement that contradicts the fundamental nature of Christianity in the name of Christianity. Understanding how they shape people through media, tribe, and indoctrination is critical to helping us move beyond this fragmented period.

The good thing about clay is that it can be repurposed and remolded. It may be used to create idols one day and tools the next. All of us are mere clay. But we are also so much more. We can all grow and change, repurposed and refashioned for nobler purposes. This hope drives me to the classroom each day and to the keyboard each evening as I seek to communicate the liberating insights I continue to discover every day with present and future generations.

As Dennis DeYoung sang, “Take me tonight to the river and wash my illusions away.”