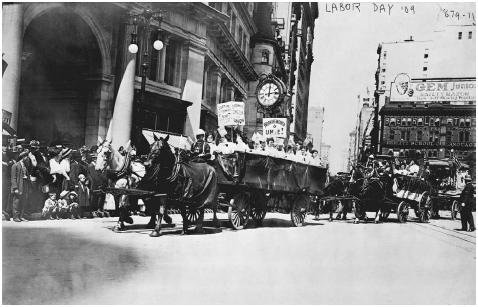 A Most Excellent Story of Labor

It is an interesting time to think about workers and labor.

In the aftermath of the Civil War, unions became increasingly vocal about defending the rights of workers. Some of the more pragmatic unionists accepted capitalism but wanted to minimize its damage to working folk. Some of the more radical unionists opposed capitalism. On September 5, 1882, a left leaning organization, the CLU (Central Labor Union) in New York City sponsored a union festival to correspond with the Knights of Labor annual conference in New York City. The organizers of the festival, Matthew McGuire (machinist), Robert Blissert (tailor), and Peter J. McGuire (carpenter) wanted to recruit unaffiliated workers, legitimize unions, and demonstrate to politicians, employers, and the general public that labor was powerful and important.

The first Labor Day festivities included a procession of 10,00 to 20,000 workers, some wearing the uniforms of their trade like aprons or work clothes. Some of the socialists wore red badges or armbands to show their politics. Some unions did actual demonstrations of their craft, such as cigar rollers, you guessed it, rolling cigars. Others marched with banners to proclaim their support for 8 hour work days, opposition to child labor, and support of unions. There were speeches by union leaders and afterward, picnics with families and German beer, fireworks, and dancing to union bands.

The CLU repeated this festival in 1883 and 1884 and wanted to make the event a national holiday, in between the 4th of July and Thanksgiving, which gave workers a rare 2 day weekend, since most of workers worked on Saturdays. By 1889 more than 400 cities celebrated Labor Day, and Oregon made it an official holiday in 1887. It was recognized as a federal holiday in 1894 and politicians were quick to make use of the holiday to court labor votes. In 1900, Theodore Roosevelt (Republican VP candidate) and William Jennings Bryan (Democrat candidate) made Labor Day speeches in 1900 while campaigning to win the presidency.


I don’t know that many Americans remember much about labor movements or unions. But this moment in time had made many of us reconsider what work looks like. Most of us have had to adjust to what work looks like during a quarantine and a worldwide pandemic. As Debra Rienstra pointed out on Saturday, we have all had to learn how to do our jobs in new ways. If I have learned anything, it is that it is virtually impossible to be a parent and hold a fulltime job during the pandemic. It seems as if the answers to all my questions are the same: do more work. Caregiving for sick kids with COVID or just colds and allergies who cannot attend school, homeschooling when daycares and/or schools are closed, or when kids are sick, all the normal responsibilities of work with lots of creative solutions to substitute for what we did before the pandemic, more meetings, and retooling to teach virtually, hybrid, and in-person. When one adds the loss of jobs for millions of Americans and the economic toll of the pandemic, this is a sobering time for labor.

Though I am, sadly, without a functioning time machine (Bill and Ted are using it to Face the Music, apparently), I would love to know what the laborers of the 1890s would think about labor right now.