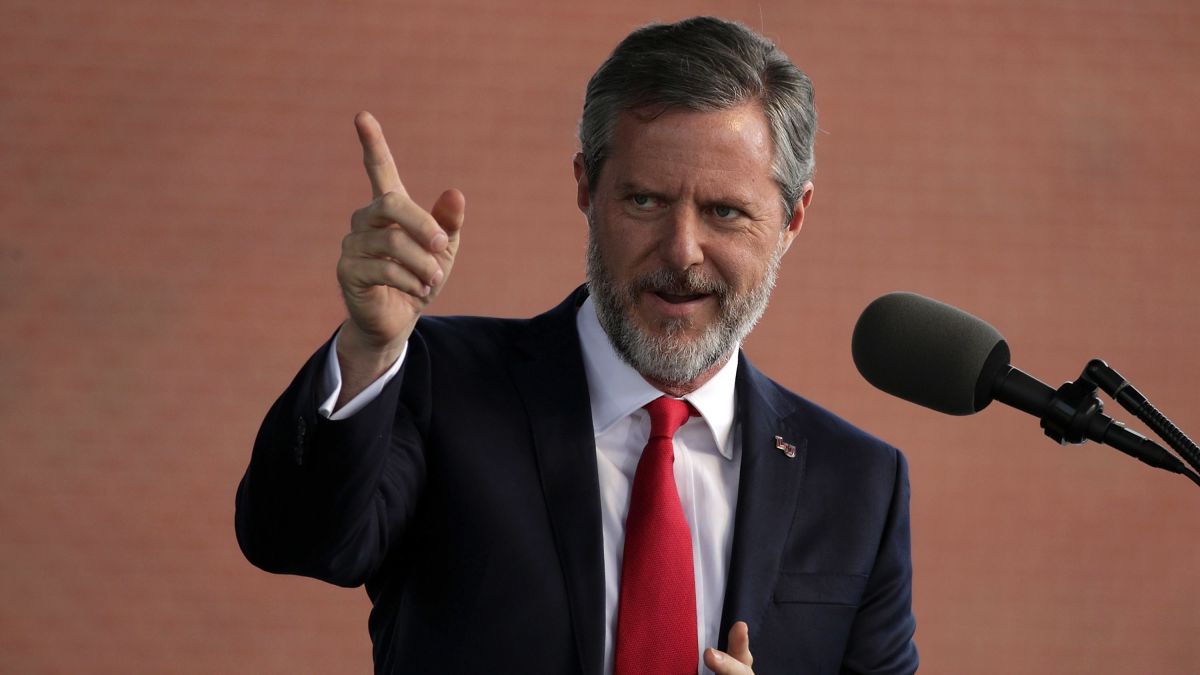 Commenting on the fall of Jerry Falwell, Jr. – whose mounting sexual and life-style scandals have now culminated in his forced resignation as president of Liberty University – might seem like shooting fish in a barrel. “The jokes write themselves,” as the late-night comics would say.

The revelation that Falwell’s wife, Becki, had a long-standing sexual relationship with a younger man, with Falwell’s cheerful acquiescence if not his active participation, appears to have galvanized Liberty’s Board of Trustees to move against him. But this bit of hypocritical sleaze was only the last straw in a load of hay that has been piling up for years. Even Falwell’s hand-picked and long-suffering board members could no longer look the other way.

It must have been tempting to do so, though. Since taking over the helm of Liberty University after his father’s death in 2007, Junior has multiplied its assets ten-fold, established a strong presence in on-line education and NCAA Division I sports, and made Liberty a primary pilgrimage site for conservative politicians, above all Donald Trump.

Falwell’s bare-knuckle persona and autocratic control of LU ensured that Trump’s brand of nationalist populism would receive an uncontested welcome there. In return, he had extraordinary access to the president to ensure the restoration of “evangelical” Christianity to social and cultural power. What’s not to like about that?

Well, even if you have no particular problem with Trump’s agenda or that of self-appointed evangelical gatekeepers like Falwell, there are plenty of reasons to be deeply concerned about the pattern of behavior Falwell has manifested in his personal and public life. One way of capturing that pattern would be to say that Jerry Falwell, Jr. has boundary issues.

Although he has sought to displace responsibility for the affair onto his wife, evidence provided by the other party, Giancarlo Granda, strongly suggests that Falwell knew about the relationship and even helped facilitate it. Whatever his motives, respecting the boundaries imposed by his marriage vows was not among them.

Similarly, his stewardship of Liberty University has frequently violated boundaries. Chapel services became Republican political rallies; fiduciary responsibilities to the institution yielded to the financial interests of his family and friends; the university’s website was commandeered to help rig a poll to benefit Trump’s nascent presidential campaign; the academic calendar was revised to allow Liberty students to vote in a local election in order to affect the outcome; Trump’s 2017 commencement speech was commemorated with caps and t-shirts combining Liberty’s logo with Trump campaign slogans; and the list goes on.

The general impression left by Falwell’s presidency is that he did not feel constrained by any boundaries that separated his roles as husband, father, friend, president, or citizen. Whatever lever of power was at his disposal could be used for whatever purpose he sought at that moment. The result of that “boundless” behavior is paradoxical.

Despite the outward signs of success he can point to during his 13-year reign, one board member describes Liberty University under his leadership as “a totally dysfunctional organization,” adding : “Very similar to Trump’s White House.”

That’s a telling comparison, especially considering the source. For the past three and a half years, Donald J. Trump has been the very paradigm of a boundless presidency, transgressing norms, expectations, and even laws in pursuit of untrammeled control.

Although every president tests the limits of executive power, no president before Trump has openly argued that “I have an Article 2 where I have the right to do whatever I want as president.” That includes sweeping away any distinction between his administration, his campaign, his business, and his family; ignoring the separation of powers built into the United States Constitution; and invalidating in advance any election that would defeat him.

The Republican National Convention has put this boundary-smashing view of presidential power on vivid display, as Trump defies the spirit (and possibly the letter) of the Hatch Act by using the White House and official presidential functions for explicitly political purposes. Of course, his board of trustees — the United States Senate — has a Republican majority that has supinely permitted this march toward presidential autocracy. Only November’s election offers us an off-ramp.

Why should we care? For the same reason that Liberty University’s board of trustees ultimately had to care about Falwell’s boundary issues. Absolute, unaccountable power in any setting is always a prelude to abuse, folly, and dysfunction. To quote Steve Earle, “Yeah, I believe in God – but God ain’t us!”