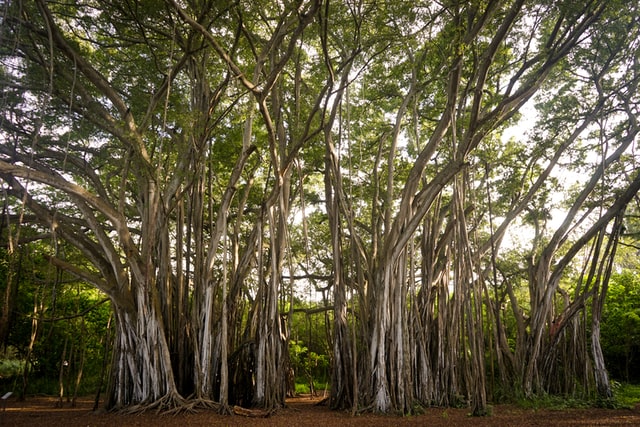 Nature and the Cosmic Christ

I read Richard Rohr’s Universal Christ and Richard Powers’ The Overstory in quick succession this month. It was not out of any sort of forward thinking or planning on my part but more because I had one sitting on my Kindle for months and the other out from the library with the due date looming. Despite my random approach to reading, it was an unintentionally complementary pairing for the month. To me, both books were expansive invitations to experience our world in a different way.

Not that the books are about imagined worlds or escapism. Rather, they are both firmly rooted in the material world. The Overstory deals with the world of trees, and Rohr’s book spends a significant amount of time on Christ’s presence in this world — in people, in ourselves, and in nature. Both are about reorienting our perspective and our relationship with the world around us.

The first section of The Overstory is especially poignant and beautiful. It details the stories of nine individuals, largely through their connection to trees. Generations of a family in Iowa connected by a surviving chestnut tree, a soldier saved by a banyan tree after bailing out of his plane over Cambodia, a young boy who breaks his back falling from an oak tree, activists rallying to save a redwood called Mimas. Through these seemingly disparate strands, Powers draws out a recurring theme: the interconnectedness of trees, our connection to nature, and our connection to each other.

In The Overstory, trees support one another as well as the creatures and other plants that live around them. Powers’ novel also describes trees as ever-present — they have shaped our lives for millenia. They are present in ways we are usually only tangentially aware of, but if we look closely and practice contemplation and awareness, we’ll realize the richness of this landscape and how vital trees are in our lives.

It was this aspect of trees, woven throughout Powers’ novel, that reminded me of Rohr’s conception of the Universal Christ. Both Rohr’s Cosmic Christ and Powers’ trees are present and acting in concert with each other and nature in ways we can only comprehend if we’re paying attention.

Rohr argues that Christ is everywhere and in everything. How can we not look at the world around us and see Christ in every little detail? For Rohr, the magnitude of the universe is further evidence for the Universal Christ. With a little practice, contemplation, and meditation, we can begin to see Christ in ourselves, in others, and in the world around us.

Both books also drove home the point that what might seem mundane to the untrained eye is really quite miraculous once you start paying attention. When describing the events after the resurrection, particularly the ways the risen Christ appeared to his followers, Rohr notes that Christ appeared in ordinary ways and in ordinary settings — as a fellow traveler on the road, as a gardener. He writes, “These moments in Scripture set a stage of expectation and desire that God’s presence can be seen in the mundane and ordinary.”

The Overstory and The Universal Christ are also about long patterns seen over time, patterns that we as humans tend to miss if we’re not paying attention. In looking beyond the resurrection as a one-time event, Rohr argues, “The Risen Christ is not a one-time miracle but the revelation of a universal pattern that is hard to see in the short run.” In both books, there is the recognition that we are part of an unfolding story, one that started long before we were born and will continue long after we are gone.

And throughout the novel, Powers’ invokes the opening line of Ovid’s “Metamorphosis”: “Let me sing to you now, about how people turn into other things.” It mirrors Rohr’s description of the incarnation: “God loves things by becoming them. We love God by continuing the same pattern.”

We are already a part of the story, whether we realize it or not. But if we pay attention and start to see the patterns around us, we can partner in the work.