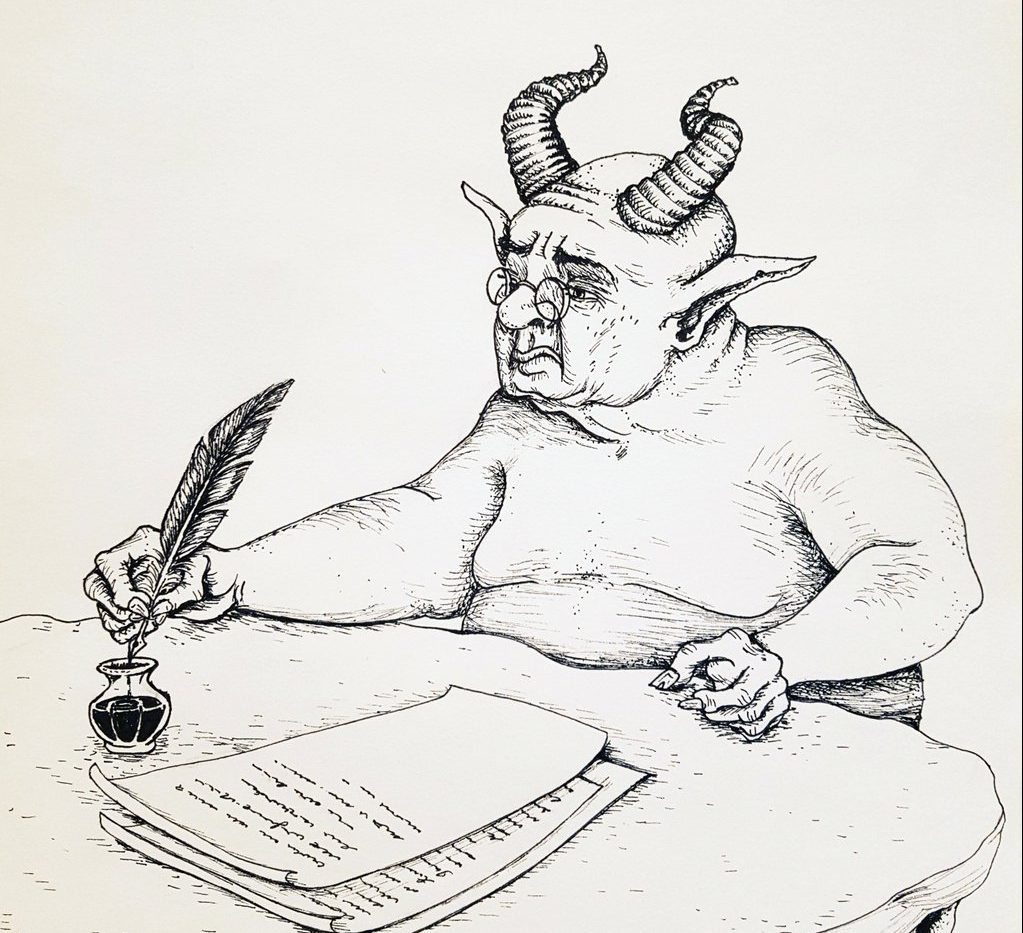 A Letter from Screwtape

Let me start with another reminder that you must take great care that this letter not fall into the wrong hands. As you know, some years ago a number of my letters fell into the hands of one C.S. Lewis, who promptly published them as The Screwtape Letters. Our Father Below was not pleased.

That said, I am glad to inform you that Our Father Below is very pleased with the work that you and your colleagues have been doing with your evangelical patients. That they are largely responsible for the election of Donald Trump, and that they continue to devotedly support him, is the greatest victory we have had in the battle against the Enemy in a long, long time.

The results are obvious. As most Americans, and most of the world, can see, Trump is a vile and morally corrupt man. That evangelicals would support him convinces most people that your evangelical patients are hypocrites. It makes it very difficult for them to do what their name confirms is one of their first priorities— to evangelize. Few are going to buy what they are selling.

It is worth, I believe, reviewing how we have been able to accomplish this. You may recall that it has taken some time to get them to this point. Prior to the middle of last century, evangelicals were not overly involved in the political arena. Then various things occurred that led them to see that the United States was becoming more secular. Several Supreme Court rulings were of importance. Remember the ones banning prayer in public schools? Or how about providing a constitutional right to abortion?

Increasingly your evangelical patients started to get involved in political issues, believing that this was consistent with the Enemy’s command to be salt and light in the world.

As their country continued to become more secular, despite their best efforts, some of our finest work was encouraging them to feel as if they were victims. As they became increasingly frustrated at their inability to stem the cultural tide, we were able to push them more and more to a desperate desire to win-at all-costs in the political arena. We blinded them to the fact that they should have been salt and light in the way they pursued their political goals — if they were faithful to the Enemy. In other words, they should have made the political process better (from the Enemy’s viewpoint — obviously not ours) because of their involvement in it.

In this regard it is important to note that the Enemy has always been uncompromising when it comes to truth. Recall how he even called himself “the truth.” In contrast, he called Our Father Below “the father of lies.” In this unintended compliment, he was obviously correct. Our Father Below has always taught the central role that lies play in keeping our patients ineffective.

Accordingly, we have done well, very well, in persuading your evangelical patients not to insist that Trump, and the political party that supports him, pursue truth. We have kept them more focused on winning political battles. Believing that Trump can give them the results they want, they are devoted to him. None of these evangelical patients seem at all concerned that he lies all the time about anything and everything. And in tolerating the lies of Trump and his party, instead of being salt and light in the political arena– making it “better” — they have made it worse.

And my, how the issue of abortion has been so very helpful to us in encouraging evangelicals in their support for Trump despite his lies and vile nature. Trump has appointed Supreme Court justices, who may one day reverse the decision that held there is a constitutional right to abortion. If that decision is reversed, then your evangelical patients believe that the lives of many unborn children will be saved.

We have pushed them to choose. Which is more important — saving lives or denouncing Trump’s moral outrages?

The Enemy has always called his followers to live by faith in him. Do you realize how successfully we pushed them off that path? They are no longer asking “What is the path of faith?” as the Enemy would wish. Instead they are asking “How can we win? If we support Trump, then won’t lives be saved?”

If your evangelical patients were being true to the Enemy, we would have expected them to be denouncing the lies and moral outrages of Trump and his party — just as the Enemy denounced the lies of Our Father Below. They would have been insisting that their leaders pursue truth. And in so doing, they would have left it to the Enemy to bring about — in his own time and in his own way—the results that the Enemy desired. Instead of relying on the Enemy’s power, they have relied on a morally corrupt leader.

Even if they have forgotten the Enemy’s power, we must not. We must continue to encourage them to believe they will accomplish everything through raw political power. They may accomplish some things with such power. Nevertheless, they will have lost — and we will have won — on the more important issue. It will be much more difficult for anyone to take seriously the faith that they purport to hold.

Keep up the good work.

Steven Skahn is a lawyer practicing in Grand Rapids, Michigan. He is a member and Elder of LaGrave Avenue Christian Reformed Church in Grand Rapids.  He is also the author of Seeking God: How Christianity Makes Sense of What a God of Love Is Doing in This World.