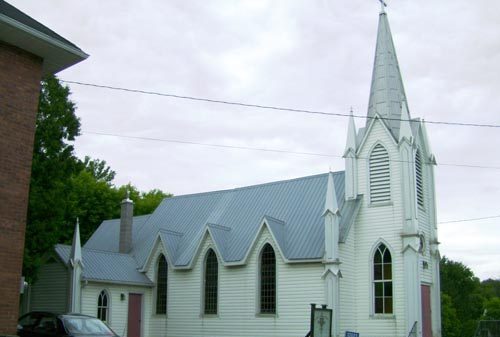 I Love the Place Where Your Glory Dwells

The cause of the fire was arson, but the reason it made the national news on CBC was the gunfire and attempted murder by the arsonist, an “active shooter.” It took hours for the Provincial Police to secure the area, and from behind police lines the volunteer firemen had to watch the church burn down. It was a great tragedy for the village. The church was 133 years old, a pretty Carpenter’s Gothic building with a brave little steeple and pinnacles on its corners. Its interior was the original beaded boards of cedar and pine, with the obligatory altar window in honour of the Canadian soldiers in the Great War.

It is a grief to me and my family. We’ve been worshipping there for thirty summers. At the Peace we greet everyone by name. They’ve dwindled to a dozen most weeks, and often less. We’ve been with them through five priests, who serve a five-point charge. The priest comes every other Sunday, for Holy Eucharist, and it’s Morning Prayer on the off Sundays, led by Mark, the Warden. He’s been asking me to preach on those Sundays, if we walk in. We have our numbered offering envelopes, and our names are listed on the bottom of the roll, with an asterisk. At coffee they ask me politely about Brooklyn and my church. After our ceiling fell Marilyn sent a cheque towards the repair.

I retire in July, and we’d been looking forward to a whole summer of Sundays there, with our little communion of saints in our little sanctuary. With the pandemic we knew we’d have to wait till the bishop allowed us to gather again, but now what?

Yes, yes, I know “the church is not a building,” but still. The United Church, with its characteristic hospitality, will no doubt offer its sanctuary, which is a little larger but less lovely, and with no kneelers in the pews and no altar rail. What will we do? Worship is so embodied, stiff and elderly as we are. Part of what I love about St. James is the unconscious dance of our ritual. Will that be lost as well?

I wrote about that dance ten years ago for Perspectives, a piece called “Body Language.” It’s mostly about St. James, but also about two of my own charges. To remember the St. James Anglican Church, I’ve asked permission of the editors of The Twelve to reprise it, as follows:

I love the way the kingbird feeds by acrobatics from the trees along the lake. She lunges from her branch above the water to snatch what I can’t see, or plunges down and curls around the bug she catches. I love the way that Levi takes communion at the rail. I kneel as he stands next to me, stocky, ruddy, ancient, undistracted, with his hands cupped out and his eyes half closed. I sit with him in his pew, when I’m at the cottage by myself, in the place where his wife Isabel sat before she died last year, and then I follow him up the aisle, and he limps a little, using the pew backs as a hand rail. He always walks up on the right side.

I know the way that Marilyn will go up front to read the First Lesson, which is always hers. I’ve been watching her for years, and now she too has to walk her hands along the pew-ends to keep her balance. But she stands squarely at the lectern, and we can always hear her clearly because she reads with her face up. But she keeps her eyes down, through her brown glasses, looking at the text and never at us.

I love the way that Mark, the Warden, who serves as deacon, unconsciously wipes his right knuckle across his cheek the same way every week, when he comes out front to get the offering. He’ll do it again behind the altar when he gets the first communion from the priest. He’s tall and thin and single and quiet. He slightly and stiffly wobbles his head from side to side whenever the Holy approaches him. He used to sit with his mother in the front pew, who was also tall and thin, but then she died ten years ago, so now he sits up in the chancel. When he gets up from his seat to read the Prayers of the People he holds his right shoulder back a little, and I don’t know why.

I hated the way that seminarian made such a show of cleaning the chalice and paten after communion, while we were kneeling in our pews, and his repeated bowing to the priest when she came with the pyx and then with the cruet of water and then with the little towel. I think of that scene with Peter Ustinov: “Will you stop bobbing your head!” The Anglican sacred laundry. Most Sundays our priest just does it unobtrusively as we get ready for the final hymn.

I remember in my second church how the elders would take the trays of bread and juice. Rik with his eyes down but in confidence, Wynand calm and business-like as if he did it every day, Pieter nervously checking from side to side, and Maarten with his face up shining and his eyes wide open to engage the congregation. After they were done serving Rik would compose his hands and mouth to gather his body back together, as if he were grooming himself, but there were no crumbs on him. He was fastidious, even with his dairy cows. He was conservative, and orthodox, and a very loving man.

In my third church we had Gujarati immigrants both Methodist and Presbyterian. One of our Methodists refused to take communion from the hand of an elder (who had been Presbyterian). I had to come around and give it to him myself. One young woman had broken her right arm and it was in a sling. When I came with the bread, she would not extend her left hand to receive it. Then I realized she would have felt it as profane, so I put it in her mouth, like we were Catholics. In my second church I got a complaint when I had Wynand break the bread — she said it was because he had just milked his cows a couple hours before. I answered that his hands were cleaner then hers were.

I love the way that Hilda kneels to pray. She is old, but proud, and always smartly dressed, and she kneels up ramrod straight, without leaning back against the pew. Della kneels straight too, though she is gentler with her body. When she gets ready to enter the aisle she always smoothes her blouse and skirt and then walks fast. Her greeting at the peace is warm and generous. At the benediction she goes into the vestry for the coffee pot, which she carries out in her left hand. Her pound cake and cookies are waiting at the table by the narthex.

“O Lord, I love the place in which your glory dwells.” It’s a tiny church, in rural Ontario, where my wife and I have worshipped in the summertime for twenty years. This new priest is the best we’ve had, and the attendance has gone up from sometimes eight to sometimes twenty. I love to pray with these people, the “locals”, as they are called. I love to pray there with my wife, so unselfconscious and quiet in her body, or with my buddy Orville who stretches his long arms out upon the pew in front of us.

Last Saturday I drove to town to shop, and there was Mark, the warden, selling sweet corn from his truck. I asked him to pick me out four ears. He reached into the pile and held out the ears for me with those same hands that serve me communion. Then on Sunday I drank the Cup of Salvation from the hands that gave me the sweet corn. Well, we had just prayed our Eucharistic thanks for Creation and Salvation.

The bread of angels and bread for the birds. Well, it’s corn for the ducks, from the hands of Fred, whose cottage is across the cove. I love how the mergansers shoot under the surface and then scud across the water, kicking up spray behind them. I love how the mallards come down from the air: gliding in at great speed past my shore, necks up, tails down, feet lowered, wings recurved, rolling right to round the point, like they can feel how gifted is their flight. “O Lord, how manifold are your creatures, in wisdom you have made them all.”