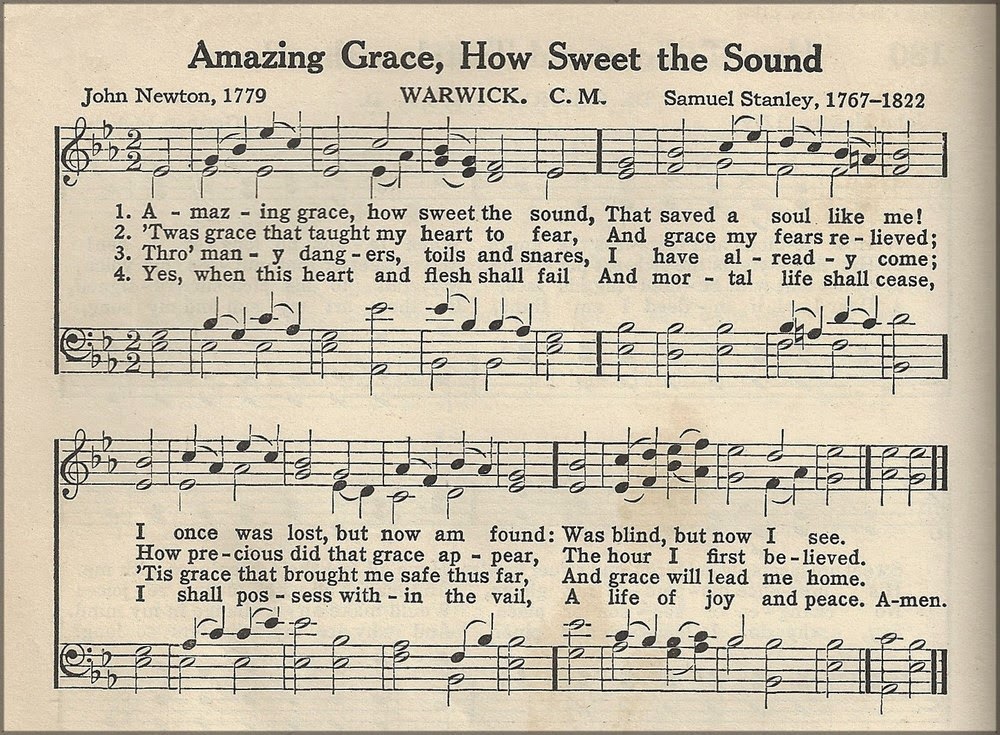 One of my summer jobs in college was researching and compiling hymn stories – the history of composers, authors, tunes, and circumstances, for Hymnary.org. I love a good hymn story. I love the idea that the songs we sing today were written by real people, with real stories, born into contexts, countries, wars, religious realities, family drama, their words a reflection of the moment even as they speak of timeless truths.

Some hymn stories are quite commonly known. Many of us are aware of John Newton’s nefarious employ as slave trader whence he wrote the famous words, “I once was lost, but now am found, was blind but now I see.” Or the tragedy of Horatio Gates Spafford’s daughters drowning at sea on a journey from the United States to Europe in 1873, leading Spafford, who was to follow behind them after being held up on business, to write near the spot of the disaster, “When peace like a river attendeth my way, when sorrows like sea billows roll; whatever my lot, thou hast taught me to say, “It is well, it is well with my soul.”

Other stories aren’t quite as well known. Here are some of my personal favorites.

What Wondrous Love is This

There’s not a lot to say about this Lenten mainstay, except that the meter (the number of syllables per line) is derived from the meter of the old English ballad, “Captain Kidd.” And I rather love the fact that a song as melancholy and solemn as “Wondrous Love” is connected in some way to a jaunty and irreverent song relating the sins of a pirate. (The great Canadian folk band Great Big Sea has a rather delightful rendition of “Captain Kidd.” See if you can sing “Wondrous Love” over top.)

This story is more fable than fact, but its a fable I want to be true. Legend has it that in 5th century Ireland, King Logaire of Tara decreed that no one could light any fires until a pagan festival was begun by the lighting of a fire on Slane Hill. St. Patrick, missionary to Ireland at the time, lit a fire in defiance. But rather than execute St. Patrick, the king was so impressed by his devotion he honored Patrick. Tradition states that three centuries later an Irish monk named Dallan Forgaill wrote the poem “Rop tú mo Baile” (“Be Thou My Vision”) to commemorate St. Patrick’s bravery. Forgaill was killed by pirates when they raided the monastery he was staying at while visiting a friend in Inishkeel, but the poem survived and was passed down until finally being translated into English by Mary Elizabeth Byrne in the early 20th century, and versified by Eleanor Hull in 1912.

Just as there are lyricists and composers today, so too were many hymns written in verse before being put or paired to music later on. This is one such case, and a rather comical one at that. Charles Wesley wrote the original text of “Hark, how all the welkin rings” in 1739. In 1840 Felix Mendelssohn wrote “Festgesang,” a cantata celebrating the Gutenberg press. Mendelssohn wrote later than the tune for the second movement would “never do to sacred words,” wanting instead a “national or merry subject,” and “the words must express something gay and popular.” It’s rumored too that Wesley had originally wanted a somber tune to accompany his text. In 1856, with both Wesley and Mendelssohn dead and unable to protest, the organist and tenor William Cummings, who had served under Mendelssohn, boldly put text and tune together, and his pairing has been a favorite ever since.

What a Friend We Have in Jesus

Not every hymn story is pirates or comical music pairings though. Many hymns, like “When Peace Like a River” are born out of tragedy. “What a Friend We Have in Jesus” is one such hymn. Joseph Scriven (1819-1886) lost two fiancées, moved from Ireland to Canada away from everyone and everything he knew, and in the wake of his grief, couldn’t keep a steady job and so relied on the charity of friends and neighbors for years, even as he tried to serve those even less fortunate than himself. He wrote the words of this hymn in a letter sent to his mother following the death of his second fiancé. When asked about it later, he said of the hymn, “The Lord and I did it between us.” Scriven died tragically by drowning when he was sixty-seven, but his hymn of comfort and hope endures.

And finally, I would be remiss not to include the inimitable Fanny Crosby. Blind from birth, Crosby penned so many hymns during her lifetime, she had to write under nearly 200 pseudonyms so hymnals wouldn’t reject her for fear of including too many hymns from one author. “Blessed Assurance” was written to fit a tune penned by Crosby’s good friend, Pheobe Palmer Knapp, and was published in 1873. While the story of its entrance into the world isn’t remarkable, this story related by Ira Sankey, friend of Crosby and American gospel composer, demonstrates the comfort the hymn has held since it’s publication. Sankey wrote in his memoir that during the First Boer War, when soldiers going to the front passed another company they recognized, they would call out greetings of “Four-nine-four, boys,” which would be answered with “Six further on, boys, six further on.” In ‘Sacred Songs and Solos,’ of which a number of copies had been sent to the front, number 494 was “God be with you ‘till we meet again,” and six further on, or 500, was “Blessed Assurance, Jesus is Mine.”