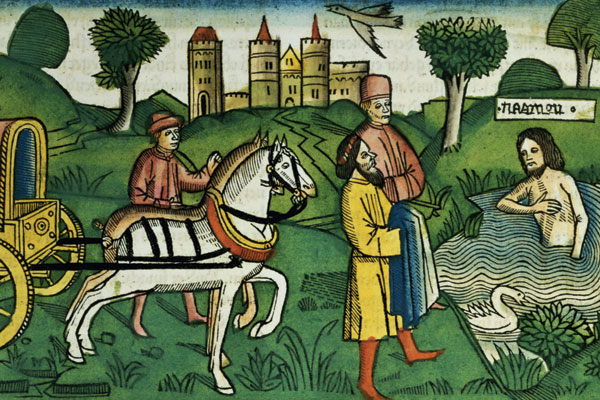 Time to Wash in the Jordan

My wife Judi likes to say, “There’s a song for every situation.” It’s a stream-of-consciousness kind of thing. The kids used to roll their eyes. Or worse yet, slink away in embarrassment if this happened in a public place. “Oh Mom!”

Now me? I tend to think there’s a Bible story for every situation. Lately I’ve been thinking of 2 Kings 5, the story of the Syrian general, Naaman. He is a hotshot cultural elite and he’s got all the bells and whistles to prove it. Late model chariot with the super feature eight hoof powertrain. Shiny sword and lots of parade field bling. And people. People everywhere. Usually saying things like, “Yes, sir! Right away, sir!” You know, those bright young men working their way up.

There’s just one chink in his armor. One flaw in the self-promoting narrative of esteem and greatness. He’s sick. He’s got leprosy. This is bad and it’s going to get worse. He’s up against an invisible enemy, one that can’t be bullied, intimidated, or impaled. Life has thrown him a curve and there’s no way out.

Or, maybe there is. A servant girl uses a back channel to slip him a message, “In my country…you remember my country, right? You know. The one you invaded. The one you looted. The one where you killed my parents and stole me away. Now, where was I? Oh yes…well, back in my country there’s a prophet who can heal leprosy. You should check him out.”

All the physicians of Damascus had been worthless. And that hydroxychloroquine was a shill. So why not? What have you got to lose? Off to meet Elisha he goes. Desperate times call for desperate measures.

Naaman shows up at Elisha’s door — presumably in a nice, quiet suburban neighborhood. The remote satellite news vans have been alerted and everything is set for prime time. Big man. Big day. Big event.

There’s just one problem: Elisha doesn’t come out. Instead, he sends a junior administrative assistant. “Go wash in the Jordan River,” he says. “That’ll take care of everything. Have a nice day.”

Naaman does what big men do when they feel slighted. He blows a gasket and stomps off.

“I thought that for me he would come out himself and really fuss over me,” he says. “He should have been prepared with lots of special effects. Greatest healing ever! Something like that.”

Evidently vanity and political clout are no match for a bacterium induced disease. Game over? Re-enter the servants. “Hey hotshot, if he had asked you to do something hard — like a grueling quest maybe — you would have done it,” they say. “So, what’s your problem with easy?”

And then an amazing thing happens. The story pivots and Naaman makes the transition from great man to wise man. He goes to the Jordan. Washes. And is healed.

I said that I have been thinking of 2 Kings 5 — a story of ambition, disease, and restoration. The story speaks to me of our current situation of lockdown and death counts. I’ve listened to the reports of how COVID-19 jumped from animals to humans and how great, pretentious men couldn’t do anything to stop it. I’m listening to reports of how habitat destruction will only accelerate the problem.

I’ve been following the reports of climate change too. We’ve built the greatest civilization in the history of the world. We’re prime time! Re-enter the servant girl. “You remember my creation, right? The resources you looted? The ecosystem you killed and the life you stole away? This is bad, and it’s going to get worse. There is in my country a prophet who can heal…”

Our issue is to determine whether or not we will transition from great to wise. It’s possible. Scripture points the way. “If my people who are called by my name will humble themselves, and pray and seek my face, and turn from their wicked ways, then I will hear from heaven, and will forgive their sin and heal their land (2 Chronicles 7:14).

It’s time to wash in the Jordan.

Peter Boogaart is retired and living in Zeeland, Michigan. He has been active in the Creation Care Ministry at Hope Church, Holland, Michigan, as well as the Holland Chapter of Citizens’ Climate Lobby. Peter has served as a consultant to both county and city governments for planning a responsible energy future. He is a graduate of Western Theological Seminary.