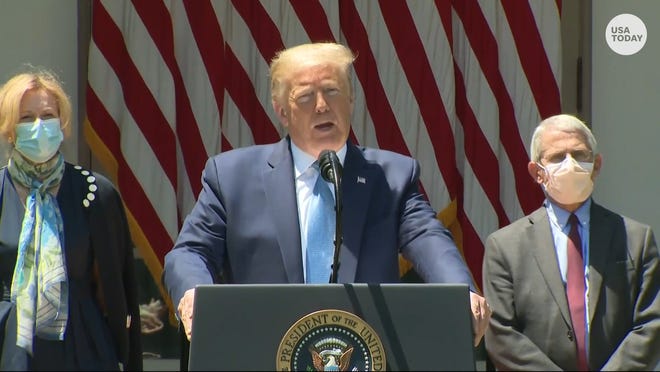 Two Takes on a Pandemic

Jesus says, “For which of you, intending to build a tower, does not first sit down and estimate the cost, to see whether he has enough to complete it? Otherwise, when he has laid a foundation and is not able to finish, all who see it will begin to ridicule him, saying, ‘This fellow began to build and was not able to finish.’” Luke 15:25-30

I. All Bully, No Pulpit

President Trump’s failings during the Coronavirus pandemic have been numerous and well-chronicled. We have all witnessed his downplaying the seriousness of the threat, his hyping untested and dangerous remedies, his misallocating key supplies, rewarding supporters and threatening detractors.

But Trump’s greatest failure has been his inability to impart any spirit of national commitment, a greater good, resolve. And that’s exactly what we Americans have needed most. He’s been all bully, no pulpit.

In recent memory, great leaders have met the challenge of the moment with powerful words. Think of FDR’s “We have nothing to fear but fear itself” or Churchill’s “greatest hour” speech. Reagan’s 1986 national address after the Challenger space shuttle disaster — they “slipped the surly bonds of earth to touch the face of God” — was masterful. It was pastoral. It was poetic. It was sorrowful. It helped to heal a stunned nation.

It was easy to be cynical about Bill Clinton’s “I feel your pain.” But World War II vets marking the 50th anniversary of D-Day, not to mention victims of floods and hurricanes, all seemed to judge him genuine. George W. Bush’s bullhorn moment — “I can hear you…” — in the rubble of the World Trade Center galvanized a nation. Obama could teach a class on pastoral care, and his singing “Amazing Grace” at the Charleston funerals still brings a lump to my throat.

“Civil religion” — the mixing of national identity with sacred symbols and mythological tropes — has always been one of my great bugaboos. I’ve been a reluctant patriot. But I have to say that I’ve felt more patriotic in the last ten weeks than ever before. I’ve been rooting for our country. We can do this. We can let our better angels shine. We can inspire future generations. Maybe this pandemic can strip away some of our worst habits. Maybe we find a common good, a deeper hope. If an enemy, a scapegoat, unites a people, then what could be better than an inanimate virus as the enemy?

And yes, so many individuals, groups, and institutions have acted selflessly and beautifully, courageously and graciously in the last three months.

Now that is fraying. Division, recrimination, recklessness, selfishness. They’re all back. And I put most of this at President Trump’s feet. We’ve known he is no poet, not a visionary. His empathy bone is fractured. Still, that’s no excuse. Leaders surmount. Leaders inspire. As someone observed, Trump is now doing what all presidents who are losing battles, losing support, and losing interest do — declare “Mission Accomplished” and go golfing.

Trump’s failure to help us as a nation “count the cost,” to make no effort to stir our hearts and elevate our priorities, not to valorize sacrifice and honor the dead, this is a huge and inexcusable blunder. It is an abject failure of leadership. It will cost thousands of lives. Equally grievous is the long term damage to our already tattered social fabric.

For a week or more already, there’s been a torrent of messaging on social media about churches “not rushing” to reopen (gather for worship). But it was nothing compared to the tsunami of rage and invective unleashed at President Trump’s announcement that houses of worship were “essential” and should be “reopened,” even ready to go by last weekend. Many of my friends and colleagues jumped in — ministers, regional leaders, denominational officers.

So severe, so unbending, so absolutist were the anti-opening/don’t rush messages that I wanted to remind my friends of the sage counsel I often receive from them. Don’t be reactive. Examine your own motives and stories. Avoid villainizing.

I recognize the ironicy of it (that’s a made-up family word when the irony of a situation is so pure and so fine it is beyond ironic). A government official telling houses of worship what to do, in order to placate defenders of religious liberty!

So I ask my colleagues, “Where exactly is this ‘rush’ to open happening?” And to those who are so loudly lambasting it, who are you addressing? Of course, there are the limelight lunatics, the media darlings. They may not have a machine gun and a copy of the Declaration of Independence on their communion tables. Still, their entire view of the pandemic is vastly different from yours. They’re not reading your tirades or listening to your polemics. Don’t flatter yourself. Don’t waste your time.

But beyond them, I’ve only encountered pastors moving cautiously, researching thoroughly, trying to hold community together. Really good pastors.

The “don’t rush” message does not help, comfort, or give backing to such pastors. Instead the strident tones sound as demanding as any from the right. So many of these messages feel patronizing and shaming. They leave me drained. If you have the need to give Trump the finger, go ahead. But please don’t couch it in concern for me and my congregation.

A colleague pastors a small, rural congregation. She received word from her district leader suggesting that January 2021 would probably be an appropriate target date for reopening. “If we don’t meet until next year, there will be nothing left,” she remarked.

She and thousands of pastors like her aren’t simply concerned about financial viability. She isn’t bowing to right wing pressure. She isn’t longing nostalgically for simple solutions. Instead, she is aware of her ministry context and her people. She loves her congregation and wants valiantly to protect them. She sees there is a need to think creatively and in a make-do manner about her congregation’s future.

Many pastors and churches are agonizingly wrestling with every little angle of this discussion. They realize that no one is going to get it exactly right the first time. There will be adjustments and learnings. But the perfect shouldn’t stymie the good.

Like everything else these days, communal worship, whenever it begins, will have many less-than-ideal alternatives. Adequate is about as high as the bar can go.

No Lord’s Supper. No Lord’s Prayer. Probably no singing. Masked and six feet apart. No children’s ministries. No coffee time. Many people preferring, even needing, to stay home. Why even bother to gather under these constraints? This thought has crossed my mind numerous times. But maybe that is a privileged perspective of an aesthete. Worshippers in POW camps, prisons, or the catacombs probably didn’t have the luxury of such demanding expectations.

Just to be clear, the church I pastor will not have face-to-face worship in the next few weeks. I am not denying the genuine dangers of communal worship. I’m certainly not advocating that churches should “open” rashly.

I am saying that conversations, preparation, compromises, and experiments have to be in the mix for the church today. Risk and failure are inevitable parts of the church’s future.

Moreover, I am saying that the blistering, unnuanced “don’t rush” messages feel more about branding and marking territory, a litmus test driven by ideology more than public health concerns.

And they certainly aren’t received as supportive by pastors simply trying to make a way.