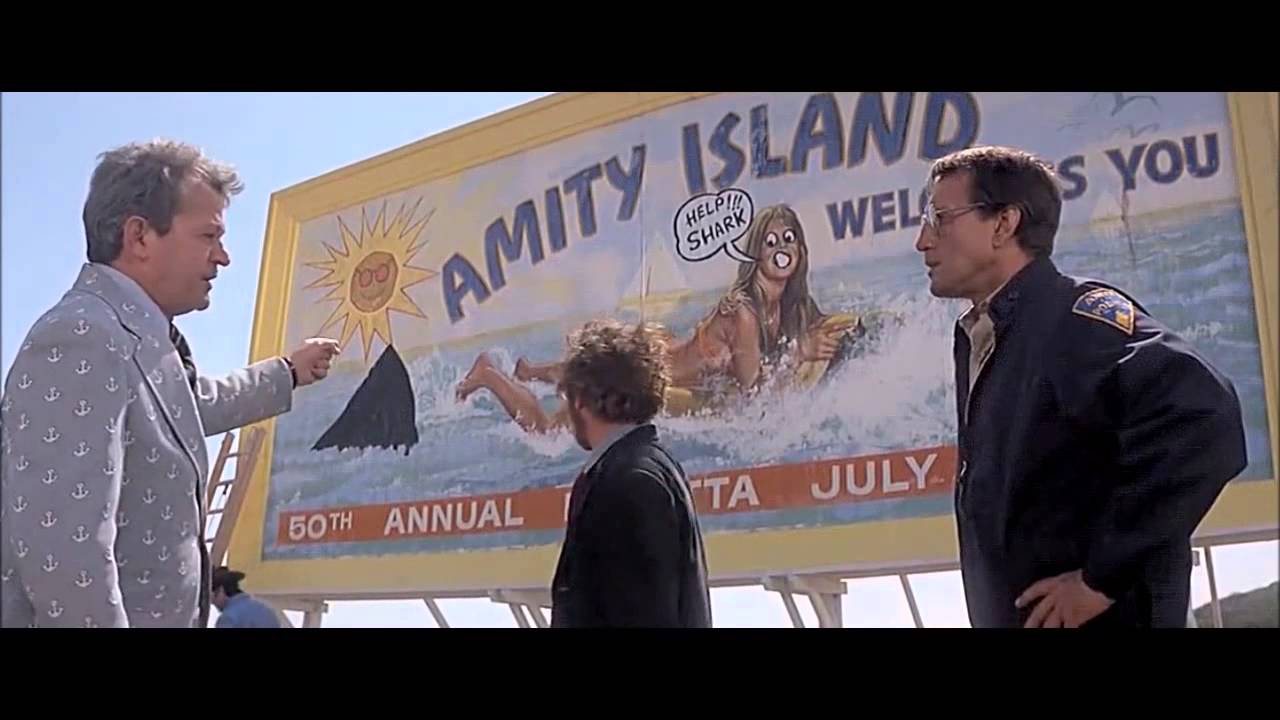 If I come across any one of a dozen or so movies while channel surfing, I will almost always stop, pick up the movie wherever it is in progress, and finish watching it.  The Shawshank Redemption, The Untouchables, The Godfather, Sleepless in Seattle, Big, Groundhog Day.  In fact, there are a fair number of films whose first 10-15 minutes I have seen perhaps just a couple times, even though other parts of the films and their endings I have seen maybe two dozen times.  My wife doesn’t think this is  good practice I have.   But even she’s been known to plop down and finish Shawshank or Field of Dreams whenever I run across them!

Another film that always stops me in my channel surfing tracks is Jaws as most everyone reading this figured out by the photo accompanying this blog.  Set on a New England Atlantic Ocean island named Amity, the storyline of Peter Benchley’s original novel is largely known to most people whether they ever saw the movie or read the book or not.  A killer Great White Shark—very rare for New England waters—decides that the good citizens of Amity Island and its bevy of summertime tourists make for a fine buffet.  Several people are killed, including a young boy.  And so the conscientious Chief of Police Martin Brody moves to close the beaches.  He is soon joined in his efforts to protect people by a shark expert named Matt Hooper who works at a big New England oceanographic institute.

But the early part of the film is filled with the drama of the wholesale resistance they meet from the town’s Mayor.  Closing beaches in the summer—and most especially in the days surrounding the economically all-important Fourth of July—is fiscal suicide for the island.  As seen in this classic scene from the film, by mayoral edict, the beaches stay open.

And this being a movie, the predictable happens pretty fast: the jammed Fourth of July beaches end up terrorized by alleged shark sightings leading to mass hysteria, a couple near drownings, and a couple cardiac events.   But then the Great White really does show up, eats a man alive in front of a group of kids on a sailboat (among the kids is Chief Brody’s son who ends up hospitalized for shock), and the deeply shaken and now-discredited Mayor shuts the beaches and agrees to pony up to pay a local fisherman to go out and hunt down the shark.

Probably there is something relevant here for our current situation.  But what could it be . . .?

That question is actually more complicated than it might appear, especially since real life is rarely like a movie.  Of course in Jaws the Mayor is all-but a caricature of someone so focused on economics as to make himself willingly blind to countervailing facts.   And of course his motivation is made out to be sheer and simple dollars and cents, greed, a desire to stay popular with constituents whose livelihoods he assured when he ran for office.

In the real world, motives are rarely that simple or that much of a caricature, though we are all tempted to go in for such simplicities because they are, after all, simpler.   The truth is we have rarely faced a more delicate balancing act than the ones our leaders (but really all of us) need to pull off in coming weeks and months.   There are no easy answers to balancing public health / the need to protect lives AND recognizing that lives depend on also being able to earn a living (that’s why we call it a “living”) and put food on the table for loved ones and children.  Mental health may not be as imperiled by our COVID-19 moment as physical health but it may be running a strong second place.  It is hugely important.

Perhaps precisely because we are all in new territory here, the one common denominator is fear.  And fear can come out in many ways.   Alas, one manifestation that is rising is fear as denial, as conspiracy mongering, as name calling.  I have tried to keep my Facebook posts of late to food pictures or links to upbeat things like John Krasinski’s Some Good News program that I mentioned on my blog two weeks ago.  But I have commented on a few posts that linked to specious articles that manipulated data to make it look like we are being lied to about this whole thing, that claim COVID-19 is just the flu, that we probably never needed to do 90% of the things we’ve done.  “Let each individual indulge his or her freedom to make their own choices and all will be well,” some are claiming in ever more strident tones.

When I have corrected errors, when I have said that recent protests by heavily armed people in Michigan’s capitol did not inspire me with hope about people’s making the right choices if left to their own devices, when I have posted other articles for consideration, when . . . well, whenever and whatever, the responses I received have not been encouraging.

One friend of a friend replied to one of my replies that I can be well assured that “Michigan’s MILITIA will protect even a#%*oles like you.”   Another assured me I was an idiot for not seeing that the Democrats have engineered this entire crisis, throwing 30 million people onto unemployment rolls in order to take a good economy away from Donald Trump’s re-election chances.  Still another condescended to say that ministers like me should keep to their little corners of the church and let business-wise folks who know the economy re-open their businesses however and whenever they want.  “Don’t trouble your little theological head with fiscal matters” is basically what that came down to.

OK, so maybe some people really are caricatures in the mode of Amity Island’s Mayor.

But it’s all fear talking.  And maybe I am talking out of my own fears too.  And thus maybe I need to check myself and stay open to other ideas.

Everyone seems to know the most famous line from Franklin Delano Roosevelt’s first inaugural speech about how “We have nothing to fear but fear itself.”   What most don’t know is the all-important lines he spoke next: “We have nothing to fear but fear itself–nameless, unreasoning, unjustified terror which paralyzes needed efforts to convert retreat into advance. In every dark hour of our national life a leadership of frankness and vigor has met with that understanding and support of the people themselves which is essential to victory. I am convinced that you will again give that support to leadership in these critical days.   In such a spirit on my part and on yours we face our common difficulties.”

In short, when fear cuts off rational thought or paralyzes us into retreating to the quick, the convenient, even to the fringes of civilized behavior, then fear wins and we cannot come together to make the kinds of concerted, clear-eyed decisions each of us will have to make soon and that our leaders need to make in advance of us.

We could all use a little perfect love for each other, even if the beaches stay closed a little while longer for the good of all.