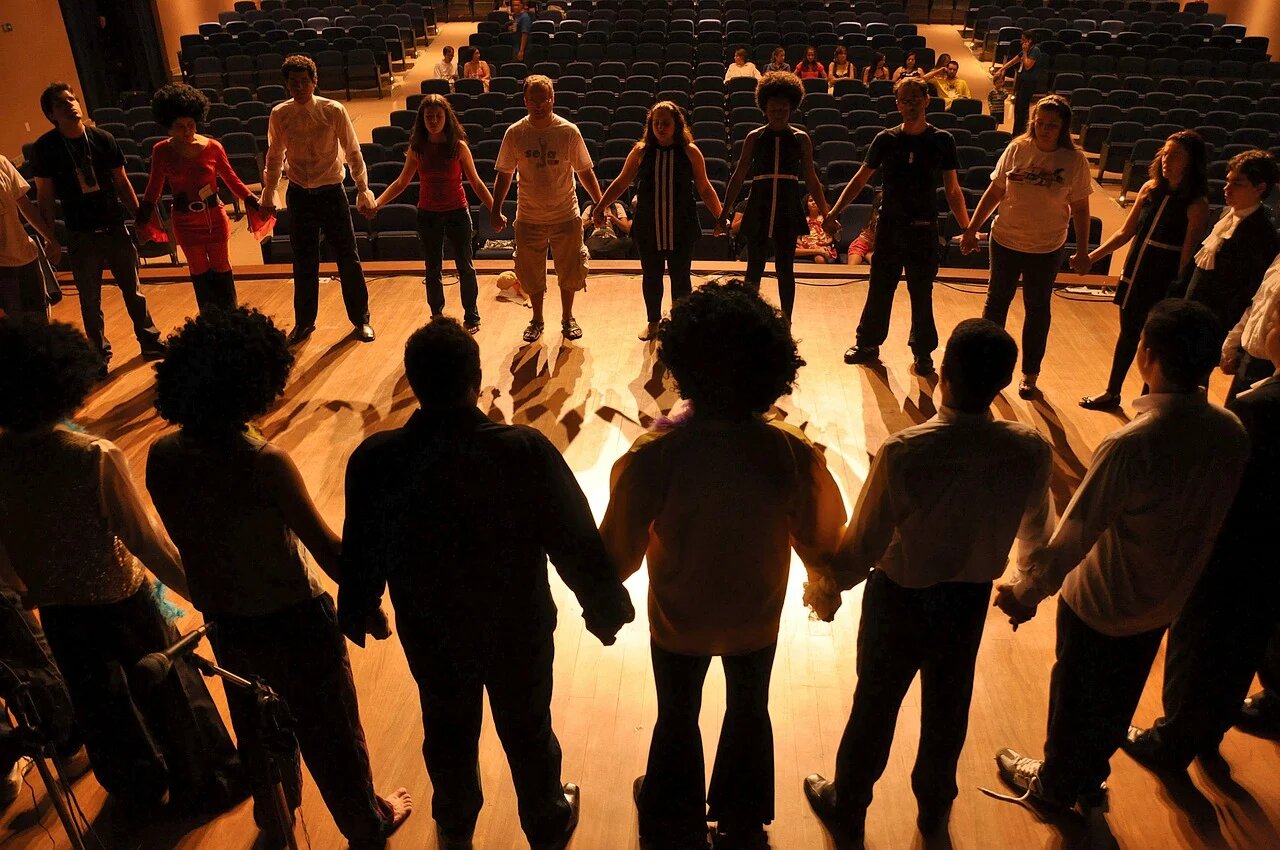 When the Church Points to the King

David and Karen Mains first penned this refrain in the Tales of the Kingdom trilogy. I learned it from Jeff and Karen Barker, professors in the theatre department at Northwestern College (Orange City, IA). Jeff and Karen raised their three children on these powerful allegories that detail the journey of those who follow the True King. This refrain, peppered throughout the stories, continues to be offered as a blessing and benediction in their family, and in their work.

At rehearsals and before every performance, after warm ups and before the first cue was called, everyone involved in a production formed a circle, placed a hand in the middle and proclaimed together, “To the King!” It was an energy booster and community building tradition. Even more so, it was an affirmation of why we did the work we did, and to whom it was offered.

As far as I know, Jeff and Karen taught nearly all of their students this refrain. Even more profoundly, they modeled this lifestyle – pointing to the King. They are Christians and they are artists always, never hiding one or the other. They are talented, but humble. They are faithful, and they make mistakes and aren’t afraid to admit it.

When she knew we needed it, Karen would interrupt our doubts or slow our hurried work, gather the entire department and take her place on the apron of the stage. Looking each of us in the eyes, she would weave a masterful story, holding up a mirror to remind us who we were – to affirm our strengths, shine a little light on our rough edges, and rally us around values of love and community.

At every opportunity, Jeff would call us back to the book we love. Not a playbill or script, but the Bible. Whether we were enacting ancient tales of the prophet Elisha or staging Little Shop of Horrors, he helped us introduce our audiences to grace and truth at every turn.

This week, the Barkers marked the official ending of their careers at Northwestern and entered retirement. I have viewed their retirement celebrations from afar (not by choice, but due to pandemic circumstances), and I find myself overcome by gratitude for their faithfulness and their influence.I am more convinced than ever that the Barkers have not only been terrific professors, they have also continued the ministry of Christ, much like the first apostles.

Together, the Barkers turned everything I thought I knew about theatre on its head. To be an artist is not, as some would argue, a “godless” pursuit but a faithful reflection of the image of God as Creator. Theatre is not only a career or form of self-expression, it is an opportunity to influence culture and justice. In a world that prioritizes the individual, they taught us to embrace the gift of ensemble. We were taught to be attentive to the process and trust that the product (the assignment, the performance, etc.) would come together. We were asked to love one another, to serve, to collaborate and learn together, whether the spot lights were on or not.

As a result, during their tenure, the Barkers trained graduates who now have careers in the theatre scenes of New York, Chicago, Seattle and more. They have also pointed their students to the upside down grace of a Savior who loves them and calls them to love others.

This is what Paul and Silas were doing in Acts 17. In Thessalonica, they are trying to help believers – both Jews and Gentiles – understand that the Messiah described in the ancient scriptures has come in the person of Jesus, the one who suffered and conquered death.

Their teachings are not exactly well received. A suffering savior? A “king” other than Caesar? This is “upside down” according to some. Paul and Silas don’t disagree. They remain committed to their message – Jesus is the anointed one, who suffered in order to end all suffering, who died in order to conquer death. This “upside down” grace is what sustains them in their mission. And while some were threatened, others were “persuaded” and joined Paul and Silas in their efforts to worship and to share the good news about Jesus Christ.

During Eastertide, I have been wondering, who is the church called to be today, even now? Perhaps turning things upside down is the way to go.

Rather than divide ourselves along party lines, we can choose to come together in acts of service and love.

Rather than pressure ourselves to make something of this quarantine experience, we can choose to be gentle with ourselves and others.

Rather than give into impatience and fatigue, we can make space for grief while encouraging one another to hold onto the hope we have in Christ

We too can further the mission of Christ, proclaiming together, in word and deed:
“To the King!”

Megan Hodgin is the Senior Pastor of the First Reformed Church of Scotia,  (New York).
Megan is a pastor and teacher, a trained facilitator, and aspiring coach.
A lover of big questions and deeply authentic relationships.
A gatherer of stories and seeker of shalom.