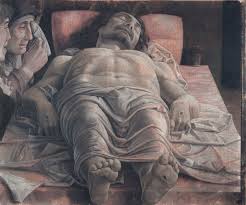 How Dead Was Our Lord?

In 1945, in Germany, during the jostling of US Army units across the Rhine, two GIs chanced to meet. My dad, in the 12th Army Group, had come in through Normandy, and Chuck Terpstra, in the 7th Army, came up along the Rhône.

Both soldiers were Christian Reformed, my dad from New Jersey and Chuck from Iowa. They hit it off, they got themselves into the same unit, eventually roomed together at Calvin College, and both went into the ministry. Chuck stayed CRC but my dad joined the RCA. They kept in touch (and argued) through calls to urban ministry, and we visited. After Chuck’s retirement he became my spiritual director. Our bonds were deep.

We were discussing the best parts of the Heidelberg Catechism, and Chuck grinned and asked me, “Why was Jesus buried?” I took the bait. “To show that he was really dead,” and we both laughed, and Q&A 41 became our private joke.

Look, that’s just not why we bury people and that’s not how we prove that people are dead. And yet, to be fair, Our Lord would not have been buried unless he was truly dead, really dead, dead dead.

How dead? Well, according to many, not totally dead. You know about the “Harrowing of Hell.” It’s in some of the Church Fathers, and Caedmon sang about it, and Dante had Virgil report it. The belief is that Our Lord “descended to Hell” in order to “preach to the souls that were in prison” (I Peter 3:19), thereby to liberate the Old Testament saints for Heaven. It’s a wonderful tradition, and I remember being thrilled when I first learned it, but I don’t believe it (not that Catechism Q&A 44 is more convincing). The tradition depends on the combination of bad equivalencies in translation with an attempt to solve the problem of I Peter 3:19.

Another answer is that Our Lord slept. Certainly the image of death as “sleep” is common enough in the Bible. Is this more than a metaphor? Martin Luther, for example, held to the doctrine of “soul-sleep,” although Calvin opposed it in his Psychopannychia: The Soul’s Imaginary Sleep between Death and Judgment.

But isn’t it true that both answers, the Harrowing of Hell and soul-sleep, assume that Our Lord did not truly die, that only his body died? Don’t these mean that his human soul was still alive and still united to his divine nature, such that in his soul he was able either to “sleep” or to depart from his dead body and journey to hell to harrow it?

What I want to say is that if it’s true that Our Lord died only in his body, and not also in his soul, then we should not proclaim that “Christ has died” as a Mystery of the Faith—not on the same order as “Christ is risen, Christ will come again,” not unless Our Lord was totally, completely dead in body and soul.

But then so many Christians do not believe it is true of us ourselves, so why should it be true about Our Lord?

So many Christians believe that when we die it’s only our bodies that die, while our souls live on—because our souls are naturally immortal. (It’s not just Christians who believe this.)

The Immortality of the Soul?

It’s remarkable to me how widespread is the assumption that “the immortality of the soul” is a core Christian doctrine, and that it’s the key to the doctrine of eternal life. I doubt that most people think through this, but if it’s true that the Lord Jesus had an immortal soul just like us, then he did not fully die upon the cross, and he was not truly dead, despite his being buried. Sorry, Q&A 41.

In St. Matthew’s report of the crucifixion, he writes that Jesus “breathed his last.” St. John reports that he “gave up his spirit.” Does this mean that Our Lord’s immortal soul flew off somewhere, whether to be with God, or to be in Paradise, or to descend to hell? Or did he die in body and soul?

The Hebrew belief was that the human soul was not immortal, that the soul is in our breath.  “Breathing his last” and his soul dying are the same thing. The soul and body live and die together.

Granted, Hellenistic ideas must have been creeping into the Jewish world by the time of Our Lord, but even an Epistle as late and as far removed from Palestine as First Timothy clearly states that only God has immortality (I Timothy 6:16).

I don’t want to overstate it. The Hebrew belief in Sheol entailed some dwindling unconscious afterlife, and Sheol became “Hades” in the Septuagint, which is why it is thoroughly adequate for the Apostles Creed to be translated as “he descended to the dead” instead of “he descended into Hell.”

But it is not overstating if I report my firm belief that when Our Lord was murdered on the cross, he truly died, in body and soul, and he was so dead that there was no power in him to raise himself up again—he had to be raised by the Holy Spirit.

Well then, does this lead us to say that God died? Because in the person of the Lord Jesus, his two natures, divine and human, can never be separated, so that whatever Our Lord suffered in his human nature he also suffered in his divine nature. Maybe at yesterday’s Good Friday service you sang, with Isaac Watts, that “God the mighty maker died for man the creature’s sin.” But how can God be killed? For God to die would entail a negative power that was greater than God!

As usual with questions of Christology, we have to manage contradictions. If Our Lord’s two natures can never be separated, neither can they be mixed. We dare not attribute the mortality of Our Lord’s human nature to Our Lord’s divine nature. In that sense, God did not die when Jesus died. But that leaves the question of what the Second Person of the Trinity was doing when then the Lord Jesus lay truly dead in the grave?

What I believe is that God rested. It was the Sabbath Day. I believe that God rested, did nothing. No sleeping, no harrowing of hell, no managing cyclones in the Pacific, no dealing with the moons of Jupiter, no checking up on the Andromeda galaxy, no attention to Tiberius in Rome. God rested on the Seventh Day. The Lord Jesus was truly dead in his human nature and rested in his divine nature, and in his person so did “all of” God. God rests, the court rests, the crown rests, it is finished, the great work is done, everything is still, the judgment waits for the verdict, and the verdict will come tonight, just before dawn.

But the defense doesn’t rest. If this is the end, if this is all there is, then God might as well be dead to us. If God allowed this innocent to die this way, then to hell with God. And God does not defend God’s self. God doesn’t answer the argument, God relents to it, God yields to it, as if, yes, it is that bad.

The disciples had no right to this defense, because they betrayed and denied and deserted Our Lord. But the women did not desert him. While the men went hiding in their fear and guilt, they women stayed with Jesus. Not that they raised the argument, but they grieved, they wept, and they went to the tomb.

J. S. Bach gave us that marvelous chorus Wir Setzen Uns for the women sitting and weeping. It closes the St. Matthew’s Passion. It is prefaced by the lullaby Mein Jesu Gute Nacht, (My Jesus, Good Night) in which Bach is as affecting as anything by Puccini. The performing style in this link is from fifty years ago, and we’ve learned so much since then about lightness and texture in performing Bach, but the voices are good, and a translation of the lyrics is there for you. The Lutheran Bach seems to assume soul-sleep, but the emotions are valid for us all. We need to let God rest, and give us time and space to do our grieving and our weeping.