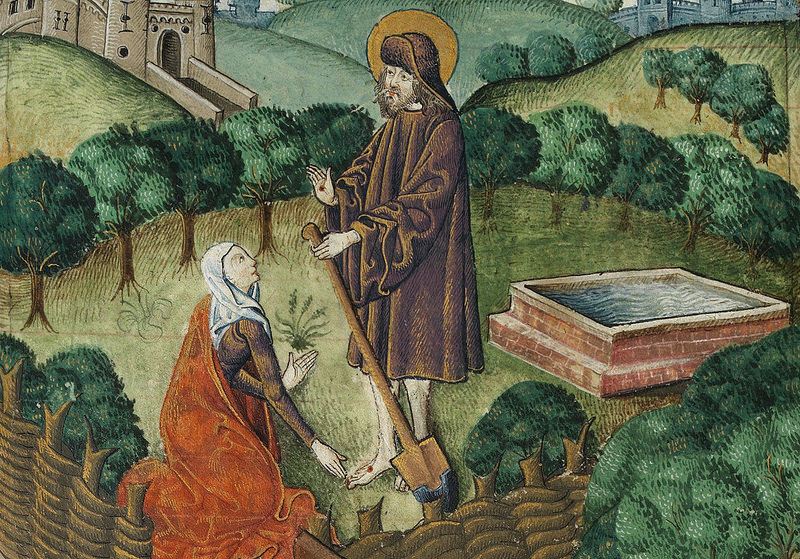 What many Christians are going to miss most about Easter Sunday in five days are precisely the things the actual Gospels mostly also are missing.  Things like fanfare and the blast of brass instruments.  Things like flower-washed landscapes and high-pitched drama.  Things like blinding white paraments and homiletical oratory of a very enthusiastic variety.

Don’t get me wrong: most of the ways we celebrate Easter are fine.  Appropriate.  Probably even necessary given the triumph we hail Easter to be.  It’s just that this is not how the four Gospels present the resurrection.  In this COVID-19 year when few of us will gather for worship on Easter Sunday—and when probably none of us should, though I don’t doubt there will be those who do so to their peril—perhaps this is a good time to let the Gospels present their understated Easter accounts.  Perhaps this is also a moment when we are being forced to be quiet enough to receive this witness properly.  We can’t gussy this up as we usually do.  And maybe that’s a good thing in its own subtle way.

Commentators have long noted that the Gospels present the most triumphant story ever told in non-triumphant ways.  One commentator I read years ago suggested this was intentional: when you present the highly dramatic in non-dramatic ways, you create a sense of irony and so create also a community of readers who “get it,” people who form a community precisely because they are the ones in the know.

Consider first of all:  For all the narrative bits and pieces that vary across the four Gospels, the one thing they all have in common is that none depict the moment when Jesus actually emerges from the tomb.  Apparently no one witnessed that and so neither do the four evangelists embellish the story to pretend someone did.  That’s called presenting a good and honest witness.  Yes, it takes away the Hollywood-esque moment of CGI special effects (small-time versions of which I have seen at church Easter pageants now and then) but no one actually saw it and so it’s left out of the narratives.

Further: Most of the Gospel stories contain a fair bit of confusion.  Even some doubt.  Those who arrive at the tomb do so some while after the big event happened.  They meet an angel or two who report on the manifest fact that Jesus is no longer there.  Mostly people are told to hoof it up to Galilee if they want to catch up with the Master.  That had to be a bit of a head-scratcher for most of those women and disciples in that Galilee was 80 miles north.  That’s pretty close to traveling from Chicago to Milwaukee.  And in a day when nothing moved faster than a donkey or a human being could walk, that’s a hike.  Strange.  If everyone was in Jerusalem, why not hang out there?

Despite this, however, Matthew, Luke, and John indicate there were a few pre-Galilee encounters with Jesus anyway, though mostly brief.  Mark, of course, never gives us even that much.  Mark ends in chapter 16:8 with a kind of freeze-frame of women fleeing the tomb in terrified silence.  Mouths agape, arms thrust out in front of them—they looked like they were fleeing an explosion.  And that’s where the curtain comes down on Mark: in fear and silence.

John’s Gospel may be the best account for us in this year when we cannot gather for worship as usual on Easter.  I love the first verse of John 20 that tells us the whole story began “while it was still dark.”  That’s my sermon title for my Easter sermon from John.  Easter begins in the darkness.  The resurrection comes to us from out of all our darknesses.  And before John is finished the story includes confusion, doubt, and no small amount of weeping.

But that’s just it.  It’s not happiness we are after but joy.  And joy is so much deeper and more refined than happiness.  As John Henry Cardinal Newman once observed, happiness pops up pretty much where you expect it: birthday parties, upon receiving good news about a promotion at work.  Happiness is what you see in children at Christmas who got the gift they had so longed to receive.

But joy is different.  Joy pops up precisely when happiness is forced to leave the room.  Joy is at graveside committal services, at the bedside of sick loved ones who die in full faith in Jesus.  Joy can reside in our hearts when we sing “By the Sea of Crystal” at a funeral even as tears stream down our cheeks.   Joy is not Christmas.  Joy is Easter.   Joy is never a first feeling, Newman said, but always a second feeling.  Joy is what comes after the sorrow, after Good Friday.

And very quietly this is the joy that finds us on Easter.  That is why in the four Gospels the resurrected Jesus never bangs down the front doors of our lives to sweep in with a grand flourish to declare “I’m BAAAACK!”  The resurrection seems to sneak up from behind.  It pops into unexpected places.

Jesus came up behind the weeping Mary in John 20.

Jesus came up behind the Emmaus-bound travelers disoriented by their dashed hopes in Luke 24.

Jesus pops into rooms with doors locked from fear as in John 20.

Jesus appears as a stranger on a beach in John 21, poking a stick into a charcoal fire on which he’s cooking up some fish and biscuits.  (This is what Jesus did after the resurrection??!!  He cooks breakfast?)

Rather like how—compared to usual anyway—we will celebrate Easter this year in most places.   But of course the Good News that just is the Gospel is that those quiet and dim and even tear-drenched places of disorientation seem to be precisely the places the resurrected Jesus most likes to pop into or sneak up onto from behind.

Look for him that way this year.  He’ll show up.  He always does.