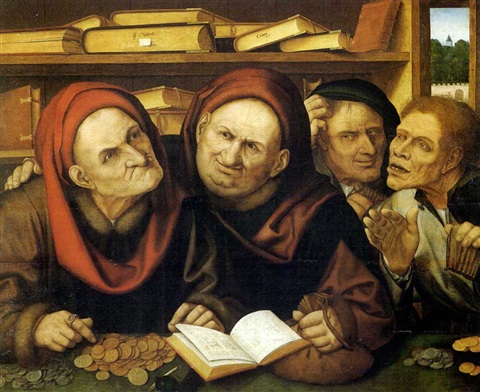 Today I will spend part of my afternoon teaching a class at the Handlon Correctional Facility near Ionia, Michigan.  Handlon is home to Calvin University’s only satellite campus where our inmate students are receiving Associate’s and Bachelor’s degrees as well as taking enrichment courses of various kinds, including the one I am co-teaching with my colleague John Rottman. Our class is sponsored by Calvin’s CALL Program (the Calvin Academy for Lifelong Learning) and since we knew we’d be in Lent for part of this course, John and I decided to have a class to study the Seven Deadly Sins.

Today we will look at Avarice or Greed.  As I reviewed some literature on this sin—and on why the church has long considered it a fatal sin—I was reminded of many things that probably most of us struggle with on a rolling basis.   As we are in an election year in the United States, we are keenly aware of the role economics plays in politics.  As COVID-19 fears grip the world, there has been no better a bellwether of what is going on—and for many no greater a worrisome prospect—than the mostly downward gyrations of the stock market.  This virus is just one of any number of things in our society that ultimately comes down to a matter of dollars and cents.  The fact that so much of life in this society ends up making us think about money is itself rather telling.

Robert Farrar Capon once said that even in religious circles, for too many children their first real experience of awe and reverence comes not so much from sacred artifacts or encounters but from the respect they see their parents and grandparents giving to money.   And when a child receives his or her first $5 bill from someone, it is an eye-widening moment (and sometimes infused with sage adult admonitions to not lose that and to do something useful with it).  We are told never to be careless with money, even with just the physical currency.  And few people are.  Of all the things you see that people drop on sidewalks, in malls, or most anywhere else you go in public, how often do you stumble on money?  Most of us take care never to drop it in the first place (we scramble to retrieve even pennies and nickels off dirty floors) and if we do drop money without noticing, it won’t stay on the ground for long before somebody picks it up.   And when you do on rare occasions stumble on some dropped currency, you feel weirdly lucky—I ran across four $1 bills recently, scooped them up, and then felt disproportionately happy about it!  Four bucks!

But I have also been reminded of a couple other truths.  Many people who have written on the sin of “Avarice” (from a word that means “to crave”) note that for people who are truly beset by this sinful disposition of the heart, sooner or later everything (and everyone) becomes objectified.  When the King Tut exhibit was making the rounds years ago, not a few observers noted the irony: Tut himself had become one object among all the other riches of gold and alabaster in the tomb with him.  The man—whoever he had been—was long, long gone.  But the gold still shined brightly even as his own remains also got affixed with a price tag.

When basketball star Kobe Bryant died recently, we were told he was “worth” $650 million.  What does that mean to say a man is “worth” an amount?  His family did not see him that way surely (hopefully).  But society at large does.  You’ve got worth because, well, you have a lot of money.  But a person’s true humanity—and what really makes anyone worth anything or what actually gives us value as people—gets eclipsed.

But we don’t need to be anywhere near that kind of wealth nevertheless to peg our identities to what we own.  Greed is all about having options, and the truly greedy revel in the options.  Years ago Imelda Marcos of the Philippines could never wear the 2,700 pairs of shoes in her closets.  But it gave her choice.  Pearle Vision Centers some years ago told consumers they needed multiple eyeglass frames so that on any given day, you could choose the frame that best fit your mood.

Just generally we are forever on the hunt for . . . more.  A while back I saw a billboard for a fast food chain that promised you could “Get Free Stuff” if you ate at their restaurants often enough.  What exactly the “stuff” was went undefined.  But no matter.  More “stuff” is better.  Whatever it is.

It’s like when a teenager—or probably most any adult—says they are going shopping at the mall.  If you ask the question, “Shopping for what?”, you won’t get an answer.  It’s shopping for shopping’s sake, to go forth to see what might grab your eye today.  You didn’t know you even wanted it (much less needed it) when you left the house but you’ll know it when you see it because, well, “stuff” is out there for the finding so let’s go shopping to look for it.

The author Solomon Schimmel once pointed out another aspect of Avarice that is deadly: the truly greedy monetize everything to the point where things without obvious monetary value get downplayed.  Sometimes this even applies to our relationships with other people.  But it can apply to other things too.

President Teddy Roosevelt founded the National Parks system in no small measure because he loved the outdoors.  You can’t put a price on beauty and for TR that meant preservation so he and others could continue to enjoy it all.  In the century since then, most of the champions of something like the National Parks have felt the same way because they have had long experience with being out in God’s creation.  Politicians and others who suggest cutting such funding are often the ones who admit to never having been much exposed to nature.  So they monetize hikes along mountain trails and birdwatching only to discover such diversions don’t pay dividends on the bottom line of a ledger somewhere.  They aren’t “worth” anything.  So why fund it?

The most common antidote to combat Greed is, of course, intentional generosity.  We need to get good at letting go, not clutching tightly.  We need the “weaned affections” of the Puritans, having things as though having them not.  But this is not easy for a lot of us.  Life gets to be too much about calculations and when that happens, we become less likely to let go because we fear someone else might waste it.

This probably explains an irony on display in John Steinbeck’s The Grapes of Wrath.  At one point Ma Joad—the epitome of wisdom in the story—notes that if ever a person finds himself in need of something, don’t go to the rich to ask for it.  You won’t get it.  Go to the poor.  The poor always lend freely from their poverty in ways the wealthy are not terribly wont to do from their riches.

Something of this is also captured by Ecclesiastes 5:12: “Sweet is the sleep of laborers, whether they eat little or much; but the abundance of the rich will not let them sleep.”