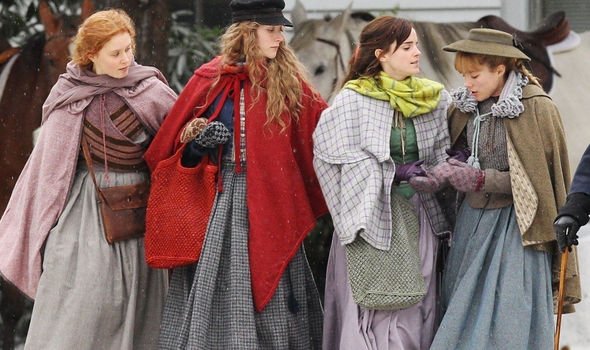 So Little Women didn’t win the Oscar for Best Film. It’s only win was for costume design.

I’m in no position to claim it should have won. I liked the film. I think I appreciated the 1994 version more, if only because I watched it many, many times with my then-young kids.

What I like in both versions is that Christians are portrayed as kindly, warm-hearted, jovial, strong, fun-loving, and compassionate people — just like so many Christians I know.

I was especially touched in the recent Greta Gerwig version when the March women brought assistance to a struggling neighbor family. Such joy and energy, such earnestness without pride, such simple love.

I thought to myself if that were today, some people would criticize the Marches for enabling the needy family’s lack of initiative, for not demanding that the family have a realistic plan so as not to need help again, for giving them a fish but not teaching them to fish. And others would criticize the Marches for their cultural arrogance, their savior complex, for providing only charity but not justice, for not addressing the deep structural issues that made this family poor in the first place.

As I watched the Marches bring help, I was reminded of a phrase in the Bible that I’ve always loved. Jesus describes Nathanael as “an Israelite indeed, in whom there is no guile.” (John 1:47)

Normally, I’m not a fan of the King James Version. Contemporary Bible translations say things like “in whom there is no deceit,” rather than “no guile.” Please tell me I haven’t become one of those who prefers the King James to the original language. (Note the guile in that statement!)

“No deceit,” seems to suggest honesty and truth-telling — certainly admirable qualities. “No guile,” meanwhile, feels like something deeper, like character, transparency, wholeheartedness, openness, almost an innocence, maybe with a dash of charm or sweetness. It’s like the March family when they brought help to their needy neighbors.

We aren’t told what Jesus knew about Nathanael to elicit the comment. Is it some sort of Jesus-y x-ray vision thing? Some have wondered if Jesus is being playful here, perhaps poking a bit at Nathanael. Others say Jesus is comparing Nathanael to the original Israelite, Jacob, one known for his abundant guile. For our purposes, maybe it doesn’t matter.

I think I’m so smitten with the idea of having no guile because I feel so far from it. And not to shift the blame, but some of that’s simply our world, so thick with guile. So cynical, so snarky, so coarse, so looking for the worst, so doubtful of anyone’s good motives.

Try to say something with no guile. It is difficult. Often you will be misheard as dripping with acidic irony.

Consider Mitt Romney’s recent speech before the impeachment vote in the Senate. (If you really feel a need to comment on the pros or cons of Romney’s speech and/or vote, please do so elsewhere. That’s not really my point here.) It sounded sincere, from the heart, without guile. But immediately, he was attacked as having ulterior motives and scores to settle.

As a Calvinist, I’m a bit stuck here. I’ve been taught to question people’s motives, including my own, to see everything as having at least a little guile. Maybe that’s why I’m so drawn to Jesus’ words about Nathanael. I just want it to be true.

I ask myself if my delight in the March family is an escapist journey into nostalgia? Ah, for a simpler, gentler time. A time when you could help your neighbor without having your deeper motives sliced and diced. A time when you wouldn’t realize that despite your best intentions, you still failed somehow, at least in part. A cozy family, an absence of guile, Oscar-winning costumes — it all could easily add up to sentimentalism. But I think I’m enough of a realist to know that upon closer inspection “simpler and gentler times,” really weren’t. There were cynics and critics in the March’s day too. Retreating into nostalgia isn’t a common vice of mine.

A while back here on The Twelve, Jeff Munroe quoted Kathleen Norris that liturgy is an “irony-free zone.” I like that. Maybe that’s one reason I favor liturgical worship. When I’m declaring an assurance of pardon with spare and simple words, when I’m leading a congregational prayer, I feel pretty guileless. In contrast, when I’m listening to the happy chatter of much free, contemporary worship, I’m often inundated by guile. And lest you think it’s all on me, you need not be Dr. Freud to detect a fair bit of guile — motives and manipulation and such deeply sincere insincerity — in so much churchy patter.

Preaching is altogether different. For me, it isn’t an irony-free zone. That’s somewhat because of who I am, predisposed to sarcasm and bon mots. But it’s also because these days, “being naive” is one of the worst things that can be said about a preacher, a Christian, or anyone. If I’m going to say something in a sermon that might sound naive even in the slightest, I’ll need to back into it, with plenty of caveats and excuses, possiblys and perhapses. My aim is not to sound filled with guile. My aim is to speak to the “real world,” to avoid sounding frothy and shallow. Can that be done without a fair bit of guile?

Finally, there’s this: Nathanael’s words before Jesus’ declaration about him, Nathanael’s response to Phillip’s invitation to come meet Jesus — “Can anything good come out of Nazareth?”

This is certainly one of the best zingers in the entire Bible. This man could have a future as a comedy writer. And this is the one Jesus describes as having no guile in him.

Maybe there’s some little hope that you can like one-liners and still have no guile.