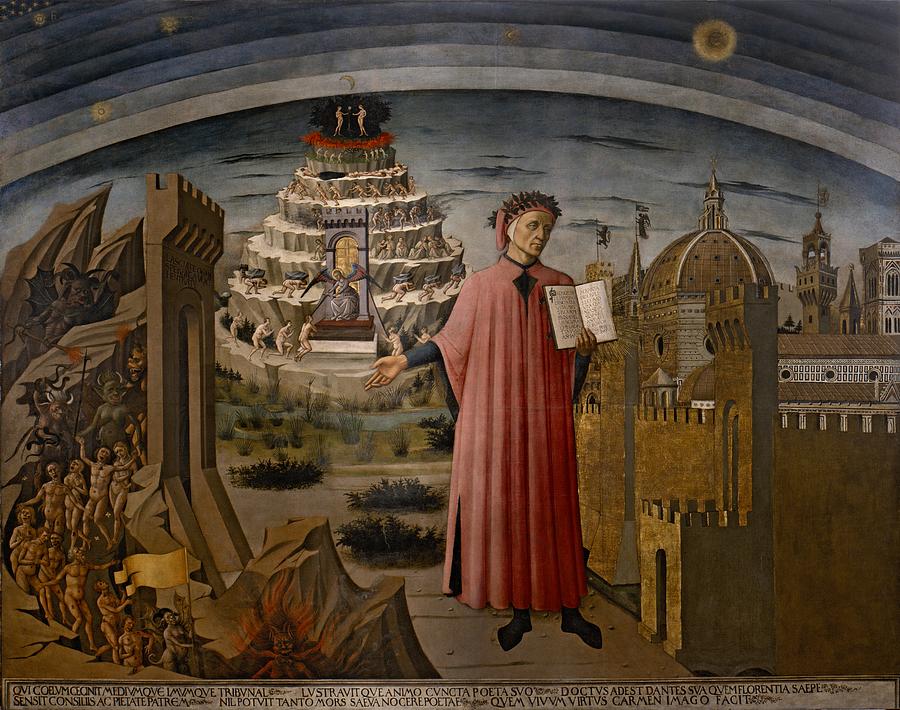 My Summer with Dante

When I had journeyed half our life’s way,
I found myself within a shadowed forest,
for I had lost the path that does not stray.

Ah, it is hard to speak of what it was,
that savage forest, dense and difficult,
which even in recall renews my fear:
so bitter- death is hardly more severe!

But to retell the good discovered there,
I’ll also tell the other things I saw…
-Dante Alighieri, The Inferno, I.1-9

The train throttled down the track along the Ligurian coast, from Cinque Terre south and then east toward Florence. As the Italian countryside blurred by out the window and the woman seated next to me nodded off, I opened the book on my lap: “When I had journeyed half our life’s way… I had lost the path that does not stray…”

During the summer months, I take the time to read long, great literature- Dostoevsky, Melville, Steinbeck, Tolstoy, Dickens. Last summer, after 11 years of pastoral leadership at the church I founded and served as Senior Minister, our family finally took a sabbatical. And, since we were going to be traveling Italy together, I thought it’d be the perfect setting to finally tackle Dante Alighieri’s Divine Comedy. I didn’t know, when sabbatical-planning last winter, how much I’d need Dante by summertime.

On a sticky July afternoon, our family wound our way over from the Piazza di Santa Maria Novelle through Florence’s web of crowded streets to the museum dedicated to Dante which resides in the home grew up in during the 13th century. Standing in the museum, I wondered at why I felt so deeply drawn to Dante.

Reading the Divine Comedy, I was taken immediately with its immense aesthetic beauty. One scholar calls Dante’s masterpiece “the last Gothic cathedral,” and they’d get no argument from me. The vast symmetry of the Inferno, Purgatorio, and Paradiso poems, with their 33 cantos –“little songs”– apiece, the complex rhyme structure, the telescoping journeys descending through the seven deadly sins into hell, then ascending through purgatory into heaven, the spherical nature of Paradise all feel like standing in the sanctuary of a literary Chartres or Santa Maria del Fiore basilica.

But that wasn’t it. It was the journey itself — the harrowing, beautiful trip Dante himself takes in the Divine Comedy that most deeply affected me.

In many ways, Dante was writing his own journey. Dante Alighieri was born into an aristocratic Florentine family, found success as a poet in his 20s, then became a well-known politician in his 30s. But in 1302, he was stripped of his money, status, and family by his political enemies, sent into exile for life, and told that he’d be killed if he ever set foot in his beloved city again.

When Dante begins writing the Inferno, he’s in exile and his life is in shambles. As he unfolds his first-person poem of someone who had “journeyed half our life’s way,” and had “lost the path that does not stray,” he’s writing out of the wreckage of his own life. And yet, his exile becomes the furnace of his own spiritual transformation — the journey the pilgrim Dante takes begins on Maundy Thursday in Holy Week and concludes with his vision of the triune God on Easter Sunday.

When I read the Divine Comedy, I didn’t experience it as medieval speculation about the afterlife or obtuse theologizing, but as a bracing parable of Christian pilgrimage, a medieval riffing on the Exodus story or the Parable of the Prodigal Son.

As I spent that summer sabbatical with Dante in Italy, I had to reckon with now being about “half our life’s way.” My wife and I had just made the decision to finish our tenure leading our church, but we didn’t have a clue where we would go next, and weren’t even in our own country, so couldn’t do anything “proactive” to figure out what our family’s next chapter would look like. Before sabbatical, I had to lead through a pastoral season that felt “savage”, “dense,” and “dark,” to borrow from the poet. The hope I found in Dante’s Commedia is that being in the “shadowed forest” can be where you wind up seeing God; that exile can be where you wind up writing your masterpiece.

Dante titled his epic poem the Commedia — the Divine Comedy — not because it’s funny, but because he was deliberately bucking the genre of tragedy-plays popular in his own time. In classical categories, the tragedy is a play in which (often great) characters wind up experiencing catastrophe, whereas in a comedy, ordinary, bumbling, or dysfunctional characters wind up nevertheless lucky, blessed, graced. The hope of the Christian story, vivid to me last July in the pages of the Inferno, Purgatorio, and Paradiso, is this: for Christian pilgrims, even if the journey feels like an inferno, at the end, it’s always going to be not tragedy but comedy.

As Dante himself describes as he closes his Commedia,
“…my desire and will were moved – like
a wheel revolving uniformly – by
the Love that moves the sun and the other stars.”
(Paradiso, XXXIII.142-43)