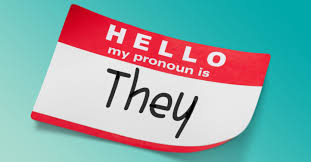 I work as an educator at a school associated with the Christian Reformed Church. I am also a regular reader of The Twelve. I’m writing anonymously, somewhat to protect myself, but much more so to protect my institution. Sadly, I’m sure you will understand why. . .

The other day I received an invitation to a webinar on “The Use of Pronouns in Higher Education.” You and I both know this wasn’t going to be about first or second person pronouns. It would surely focus on third person pronouns like “he,” “she,” and “they.”

Whoever could have anticipated that these simple words could become so polarizing?

“They” is particularly the center of attention. The Merriam-Webster Dictionary named “they” as the word of the year for 2019 and added it as a third person singular pronoun to the dictionary along with the neologism “themself.” Other guardians of the English language have also done this. How could a plural word become singular?

But long before this became loaded with polarizing tension, most of us already used “they” as a singular pronoun in common speech. We say, “Someone left their coat on their seat,” rather than “Someone left his or her coat on his or her seat.” “Their” removes all the clumsiness and in this instance sounds okay to our ears.

However, when “their” doesn’t refer to an unknown person but to someone specific, it doesn’t sound right. Sentences like these, taken from Time magazine, about the gender diffuse actor Asia Kate Dillon, stand out: “Through their work, Asia has carved out a new space . . . this speaks to their integrity.” That’s like fingernails on a chalkboard to many people, me included.

Of course, this is about more than grammar. I’ve come at this from the grammar angle, hoping to initially remove a little of the heat from the conversation.

I have heard things about gender in the last few years that have made my head spin, like there are at least 114 possible genders; gender is a spectrum; gender is a social, not biological, construct; and if you are over the age of 35, you intuitively think in binary terms, but if you are under the age of 35 you don’t see what the big deal is. I am over 35, so it’s all a stretch for me, and I know there are lots of arguments over the validity of those claims.

I am no expert in the science of sex and gender, but Sara Sybesma Tolsma, Elizabeth Heeg, and Laura Furlong all are. They are members of the Biology Department at Northwestern College and their article on the biology of sex is revelatory. Things aren’t as simple as many of us wish they were, either with plants or animals or humans

No doubt many will want to comment and set me (or the Biology Department at Northwestern) straight, but I’m not actually writing about biology.

I simply want to say four things about who gets to decide what pronouns to use that have come to my mind.

1.) Belonging, evangelism experts will tell you, precedes belief. The question for the church, then, is does the church want to have anything to do with gender diffuse people? Belonging, which can be expressed through pronouns, seems like a place to start.

3.) The church has been talking about gender neutral pronouns at least since the 1960s, when the women’s movement pointed out that “he” isn’t always the appropriate pronoun for God. Bible translations like the NRSV arose because of this. It was hard for those raised in a patriarchal system when it started, but now when I hear God talk using only male pronouns I think, “If your image of the infinite God limits God to a finite human gender, your God is too small.” As Steve Mathonnet-VanderWell has already brilliantly written in this space, God is not binary. How we think about God affects how we think about God’s creation and God’s creatures.

4.) Late in his life, Bing Crosby did a couple of things that strike me as extraordinary. He hosted David Bowie on his Christmas special and together they sang “The Little Drummer Boy.” It’s become a sort of holiday classic, so strange, so bizarre, it works. Bravo Bing. He also covered the Beatles song “Hey Jude.” This lacks the charm the David Bowie duet has. Although Bing did handle the “bom-bom-bom-bom-dee-da-dum” transition from the verses to the sing along chorus with a certain aplomb, the whole thing reeks of desperation. There is so much wrong with it. The world had passed Bing by, but he didn’t have the wisdom to withdraw from the stage. He should have. So I wonder, as I age, how to be the awkward-yet-slightly-still-cool Bing singing with David Bowie rather than the clearly over-the-hill Bing singing “Hey Jude.” I wonder if the church has any interest in questions like that. Most of the time I don’t think it does.

Can we accept someone like Asia Kate Dillon on their terms, or do our needs require us to accept her only on our terms? Grammar, in this instance, becomes both a shield for our own uncomfortableness and a weapon to control someone we don’t control.

It’s hard for me. It’s easier to roll my eyes, ridicule, and make dismissive comments about being arrested by the political correctness police than try to understand or accept people on their terms

I fear I hear the faint echo of “Hey Jude” in the distance. What’s it going to be? I am doing my best to try.