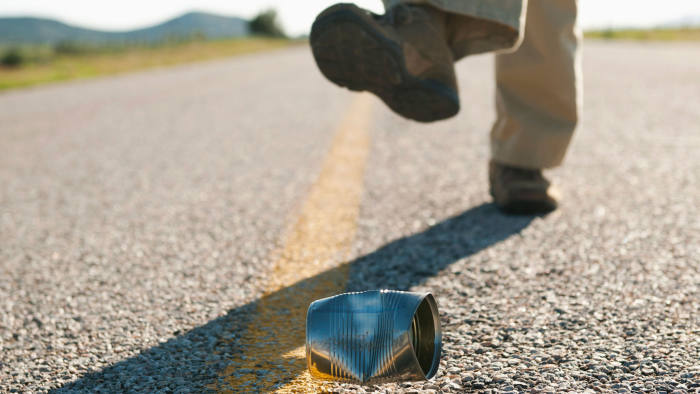 Moving the Goalposts and Kicking the Can

Football season is at last over, but imagine this scenario. Your team is ahead by a point or two. Your defense holds and the other team’s only hope is a long, long field goal. But wait, they appeal to the ref to move the goalpost ten yards closer. The crowd roars its approval and suddenly the unlikely field goal is now makeable.

Or imagine on election eve, 2016, Hillary Clinton declares that the Electoral College should be abolished and the election should be determined by a simple majority. Stunningly, Congress and the Supreme Court quickly agree, and Hillary is the winner and new president.

I know, I know. Beyond unlikely. Outlandish illustrations. About as outlandish as proposed changes in the Reformed Church in America, my denomination.

If you’re not a part of the Reformed Church, I’m afraid I may have just lost you. Why should you care about some intramural squabble? I believe, however, there are broader issues at stake here. I’m going to try to make this about something bigger, more interesting, more concerning than a convoluted, niche conflict.

Like almost every other Christian body in North America, the Reformed Church has been wrestling with issues of human sexuality for some time now, specifically affirming and including LGBTQ persons. For the past 20 months or so, we have had a Vision 2020 Task Force working on a way forward — slated to make a report to our widest, annual assembly in June. (We’ve sent off small, diverse groups to study and discuss and pray several times before.)

I would give the Vision 2020 group high marks for transparency, communication, and trust-building. They have worked hard not to catch people off guard. They understand that contentious times are no time for secrets and surprises.

In some last minute maneuvering at last year’s annual assembly (we call it “General Synod”), a proposal was put forward and passed that any constitutional changes coming from the 2020 group need only be approved by a simple majority. According to our Book of Church Order, constitutional changes need approval of two-thirds of the local groups of congregations (we call it a “classis” from the Latin for fleet, similar to a presbytery). It is not unlike the way changes to the United States Constitution requires approval of two-thirds of the states for constitutional amendments.

Needless to say, this has caused great controversy and consternation. All sorts of accusations have been made about the proposal. Moving the goalposts and abolishing the Electoral College are oft-used images.

At the very least, the simple majority idea is ill-timed. When trust is low and vitriol is high is not the time to bring out another wedge. If we in the RCA are in a season of restraint and prudence, then this proposal transgresses that. Halfway through the 2020 process, it undermines, maybe sabotages, that group’s attempt to bring their proposals into a calm-as-possible environment.

If you hear the phrase “kicking the can down the road” in a conversation about all of this, you can be sure you’re talking with an advocate of the “simple majority” change. Seriously, is it in some talking points memo?

Kicking the can down the road means that the Reformed Church can’t handle any more discussion and dissension about LGBTQ people. We’ve talked and studied and prayed long enough — it is claimed. It is time to decide. Do something!

It might seem unbelievable, but Sophie, my wife, and I sometimes disagree. Sometimes our disagreements are not superficial and simple annoyances. We can’t agree. Maybe we can’t even put our disagreement into words or focus. We persevere. We live with some tension. We process. We pray. We wait. We talk some more.

What we don’t do is say “We can’t kick the can down the road anymore. Enough! We must decide now. We must have certainty and unanimity or we must divorce!” We have a commitment. We believe time helps. Some sort of imperfect way forward will appear. We will find a way even if we don’t find an “answer.”

So it is with all things complicated. Imagine claiming that the US should stop kicking the can down the road on racism! The Civil War is 160 years ago. MLK is over 50 years past. But we are still processing. Things don’t resolve quickly. So it will be with conversations about LGBTQ persons in the church. Do you really think you can stop kicking the can down the road and then this conversation will simply disappear?

Another claim of those in favor of this simple-majority change is we are at a unique stalemate. Continuing to use the two-thirds standard fails to understand how deeply stuck we are. This time, this discussion, is an exception.

Such claims simply don’t know the history of the Reformed Church in America. There have been deep divisions before. Back then, advocates for change could have said that the two-thirds bar was just too high. The ordination of women and the adoption of the Belhar Confession as a fourth doctrinal standard would have happened much sooner. The RCA would have merged with the then-“Southern Presbyterians” in the late 1960s. In the midst of these deep controversies no one had the recklessness to propose a simple majority.

Caving in to the Culture

“Capitulating to culture” — in certain Christian circles, it is about the worst thing you can say about someone or something. It suggests, of course, listening more to the zeitgeist than the Holy Spirit, taking your cues from the TV more than scripture. It’s a pretty handy, bendable accusation. Almost any side can use it in any argument. Often it seems a lot like spotting specks in others’ eyes rather than the plank in your own.

Again and again I am struck how the arguments for a simple-majority echo our culture.

Ever since the grade school playground we’ve been trained to yell “Let’s vote!” and “Majority rules!” any time division erupts. You hear this in efforts to do away with the Electoral College. Or in claims such as the ten least populated states have ten million people and 20 senators, while California has 40 million people and two senators.

Similarly, there is an abundance of allegations floating around and all sorts of mathematical attempts to slice the pie claiming the RCA is being “hamstrung” or “held hostage” by a tiny minority. Whether or not the math is reliable, what these claims fail to realize is that the classis is not equivalent to a congressional district. They have always been different in size, and size has little to do with the many important functions of a classis, other than voting on constitutional amendments.

Comparisons of church government and civil society or the United States’ Constitution are unavoidable, but only helpful to a degree. In fact, they are generally unhelpful and usually contribute to this “cultural capitulation.”

Voting can be one instrument for the church — along with prayer and patience and conversation, respect, agreeing to disagree, loyalty, and a host of other qualities.

But a simple majority tells you almost nothing about the ways of God or the guidance of the Holy Spirit. The proposed change in the RCA is more an expression of impatience, frustration, and resentment. It’s a power grab.

PS–I mentioned my appreciation for the 2020 Task Force’s efforts to be transparent and communicative. Now that their overall direction seems to be coming into focus — “defined and connected” — their honesty may feel more like a burden rather than a gift. Already one senses a whisper campaign to discredit them — “too psychological and not biblical,” etc. Rumors suggest some congregations and groups will break away as soon as the 2020 group’s recommendations are official, not even waiting for General Synod to consider them — causing me to wonder if you enter a process only committed if you “win,” did you ever really enter the process fully and honestly?