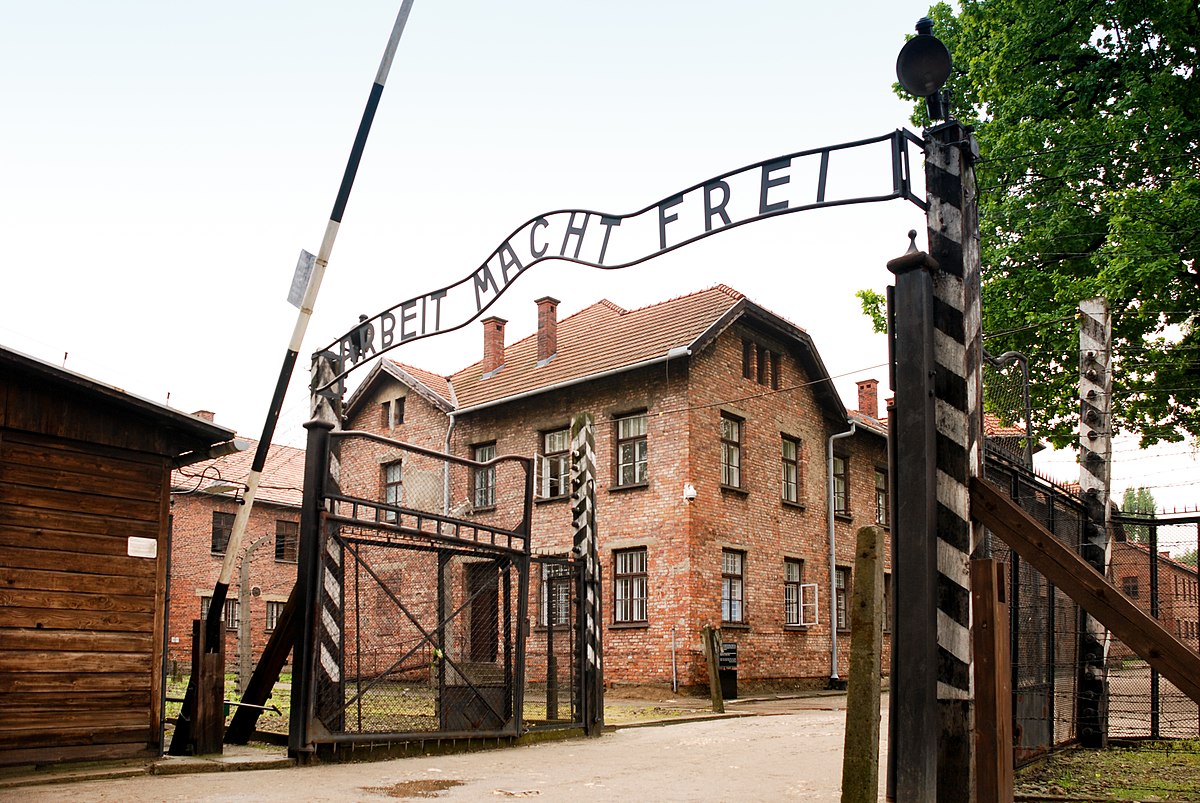 Yesterday was one of those odd collisions of events that can nearly be disorienting.  Starting Sunday afternoon and into Monday my social media feeds were clotted with tributes to NBA star Kobe Bryant who died with his 13-year-old daughter and seven others in a crash of Bryant’s private helicopter in California.  But weaving in and through all of those posts were also just a handful noting yesterday’s 75th anniversary of the liberation of Auschwitz in Poland.  There is no question that the death of Mr. Bryant and his daughter and the others is tragic and so very sad.  There is also no doubt, however, which of these two stories is of greater historical moment.

Mr. Bryant was a superstar on the court.  And since we are a society that honors stars of this sort far and beyond the value we put on so much else, Mr. Bryant was able to earn a stupefying amount of money: $328 million in salary across his 20-year career and another $350 million in endorsements across that same time.  One source said his net worth was $680 million when he died.   But his legacy was also tainted when around seventeen years ago he was accused of sexual assault or rape.  He later claimed he thought it was consensual and apologized to the woman who clearly thought otherwise.  He settled out of court with her for an undisclosed sum.  But the incident did not taint his bottom line nor derail a career in basketball that continued until 2016.

At the same time we were mourning Bryant’s sudden death, the few survivors of Auschwitz were trying to help the world remember a singular historical horror.  Alina Dabrowska and Janina Iwanska were two survivors interviewed for an NPR story on the 75th anniversary of the camp’s liberation.  There are not many such survivors still alive.   And, of course, there were not many who got out of Auschwitz alive to begin with since a staggering 1.1 million people were exterminated in this one camp alone.   Those still alive like Alina and Janina are not superstars, they are not known to anyone beyond small circles of family and friends.  They live modest lives in modest surroundings far from the glitz of those who earn hundreds of millions for movies or sports.  But their witness must endure.

Pawel Sawicki was also interviewed for the NPR story.  He is a guide at the memorial and museum of Auschwitz.  He worries that too often people come to the camp, light a candle, take some pictures, and then depart, satisfied that they now remembered something for at least a few minutes.  But Sawicki said that ought not to be anyone’s goal: the goal should be to recognize that we still live in a world that is capable of doing what the Nazis did.  Indeed, even places that seemed for a while to have learned the lessons of history where anti-Semitism and racism are concerned seem in recent years to be sliding backwards.  Since my daughter spent a semester studying in Budapest, Hungary, I pay a bit more attention to news out of Hungary.  And so I have been taking sad note of the rise of Viktor Orban and a return to the very racist attitudes that led so many in Hungary to help be a pipeline providing Jews to be sent to Auschwitz 80 years ago.

We are very close to living in a world where there will be no living witnesses to the Holocaust or to the horrors of places like Auschwitz.  We need to find ways to keep their memories alive and vivid.  But again, it’s more than that: we need to find ways to make the world less likely ever again to do to a certain group of people what the Nazis did to the Jews.  But if the first two decades of the 21st century prove anything, it is that hatred among different groups of people seems to be waxing, not waning.

Fear of “the other” has manifestly spiked in places like the U.S. in recent years.  Although not true of all—maybe not even most—of those who support President Trump, there can be no denying the strong steak of xenophobia that fuels a lot of the fervor at altogether too many of the President’s political rallies.   Many of my Latino/a friends now feel unsafe in ways they had not experienced before and many of my African-American friends note that a dozen years after the startling election of our nation’s first black President, race relations in the U.S. are in many places worse and not better.  And then there is the spike in attacks on synagogues and Jewish cemeteries in recent years—the Anti-Defamation League reports that attacks, harassment, and vandalistic acts against Jews and Jewish sites remain at near-record historical highs.

As I write this on January 27, I am sad about the news of the deaths of Mr. Bryant and the others.  The fact that remembrances of a basketball player coincide with remembrance of a concentration camp does not mean the former just doesn’t matter or ought not even be much on anyone’s radar just now.  But in the long run, although we lavish vast sums of money and glitz and praise on celebrities in this culture, the far quieter remembrance of Auschwitz points us to other facets of our culture that we cannot ignore nor wish away nor be distracted from by flashy athletes or dashing movie stars.

We have important work to do as a people, as a church, as communities of faith.  The fact that 2020 promises to be a year of rank divisiveness does not encourage me.  But it should bolster our desire to do what we can especially from within the church of Jesus Christ to break down the dividing walls of hostility that Jesus himself came to demolish.  The fact that the world keeps building those walls back up is tragic.   But take heart: Jesus said he has overcome the world.