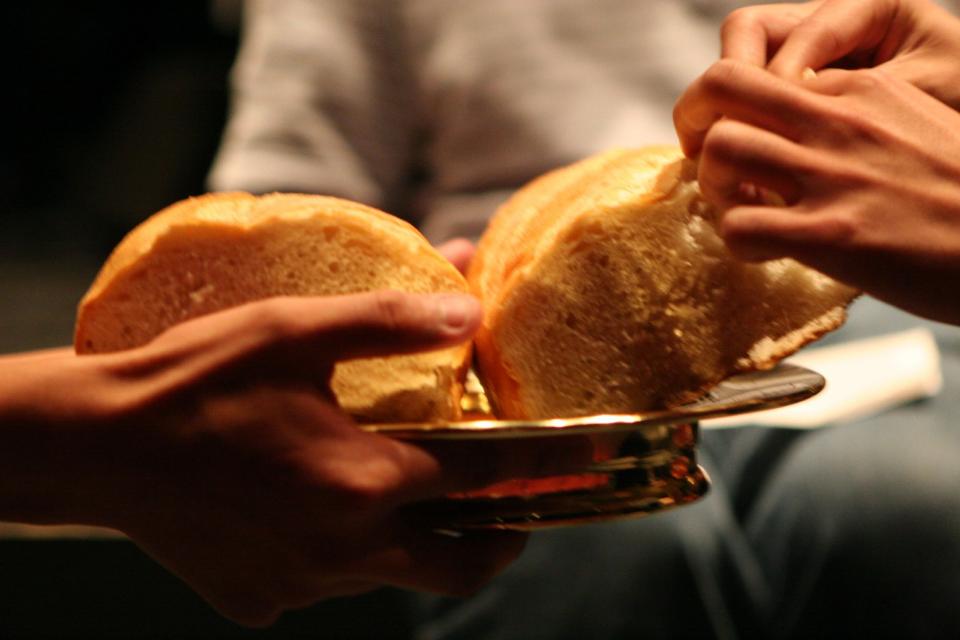 What the Pope Said

Monday night I finally got around to watching The Two Popes on Netflix. Directed by Fernando Mereilles, the film centers around Pope Benedict’s surprising resignation from the papacy in 2013, and Pope Francis’ unlikely ascendancy into the same role. It’s a marvelous film. The performances by Hopkins (Benedict) and Pryce (Francis) have earned them well-deserved Oscar nominations. The scenery is stunning, the camera angles surprising, the music choices delightfully quirky, and the pace – given that most of the movie is simply two old men talking to each other – is engaging.

As I watched, I thought back to an evening I spent in front of St. Peter’s Basilica, listening to Pope Benedict just two months before his resignation. At the end of December 2012, I joined 40,000 other young people from around the world for the Taizé European Meeting in Rome. This gathering takes place in a different European city every winter, a microcosm event of the week-long gatherings in the ecumenical community of Taizé, France.

I had been to Taizé the summer of 2011, an experience that was deeply formative. Every week thousands of young people gather from all over the world and every possible denomination, to pray together (using the simple refrains of Taizé music), eat together, and learn together. Morning prayers, including the Eucharist, begin at 8:15 – the first words you say are words of prayer, the first food you eat the communion loaf. After a breakfast of rolls and sticks of chocolate, folks break off into common-language groups to study one of the gospels, and then split into smaller groups for two hours of discussion. At 12:30 there’s midday prayers and lunch, followed by time spent in work groups. Dinner is followed by evening prayers, ending around 9:30, after which is free time until the bell tolls for silence at 11:30.

It was a boisterous, loud, chaotic, peaceful, emotional, and deeply ecumenical week.

Within hours of arrival I made friends with folks with whom I would remain close for years – especially Michael from Germany and Alicia from Poland, both Roman Catholics. Two years later we were reunited in Rome, recreating the routine of Taizé, but with prayers and activities spread throughout the city’s basilicas.

On the second day of our gathering, we made our way to St. Peter’s Basilica Square and managed to get seats just 12 rows from the steps of the Basilica, from which the pope would address us. After three hours of waiting, the pope arrived in the popemobile, meandering through the rows and rows and rows of people, waving gently and smiling. He passed within ten feet of us, and for just a moment I made eye contact with him as he rode by. He might not be my pope, but he was still the pope, and that was still an exceptionally cool moment.

The service proceeded with singing, lighting candles, and a message from the Pope about unity. “You young people,” he said, “Orthodox, Protestant, Catholics…you are Jesus to the people on Earth.”

And indeed, what I loved about the week in Taizé and the week in Rome was worshipping with people who believe differently than I do and worship differently than I do, and yet at the core, are unified by our belief in Christ. Its one of the reasons I love the Calvin Worship Symposium, an event whose attendees represent thirty different countries and forty denominations. Its why I loved interning at the American Protestant Church of the Hague, a community of believers made up at any given time of expats from sixty different countries and forty denominations.

In that moment of worship, our unity is greater than the sum of our differences. We can experience something together, something shared, something binding, even if we vote differently, or speak a different language, or eat different foods.

In the midst of polarization, outrage, and animosity, we often talk about the need to learn to dialogue with each other. I wonder if first, or perhaps alongside this, we need to create more opportunities to worship together. To remember what it is that we, as Christians, have in common. Whether white or black, Republican or Democrat, Asian or European, gay or straight. To practice the unity that is greater than the sum of our differences. And maybe then we’ll have a starting point from which to build some bridges.

To close with another movie, one of my all-time favorite scenes is the final one in the 1984 drama Places in the Heart. The movie navigates the tense relationships between numerous characters in a small Texan town during the Great Depression. In the early scenes, Sheriff Royce Spalding is killed by a young black man named Wylie. Wylie is then beaten and lynched in revenge. The sheriff’s widow, Edna, must fight to keep her farm afloat as she cares for her two young children, and makes room for a blind man who comes to board with them. Eventually a black man named Moses comes to work on the farm and must reckon with the towns distrust and racism.

The final scene takes place in a church, during the celebration of Communion. The elements are passed down the row, from neighbor to neighbor, all these characters learning to live together. Finally, in a moment of surrealism, the camera comes to rest on Royce Spalding and Wylie. Royce passes the wine to Wylie, and as Wylie takes it, he murmurs, “The peace of God.”

Those are the final words of the film.

There is much work to be done to reconcile with each other, to seek justice, to repair damages, to find solutions together. But here, perhaps, is a place to begin – extending Jesus to each other, and maybe finding some peace.