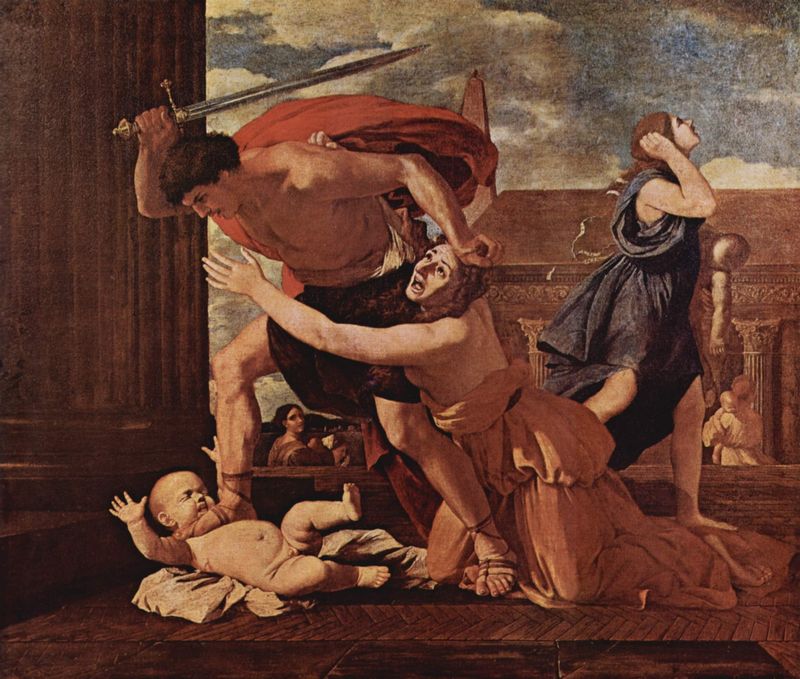 A Clash of Kingdoms

Matthew’s gospel makes short work of the sentimental Christmas. In chapter one, Mary’s pregnancy is thought disgraceful. Joseph, a righteous man, plans to dismiss her quietly, not make her a public spectacle. Then in chapter two, it’s not angels but astrologers from the East who come to Jerusalem, not with good news, but with a disturbing question, “Where is the child who was born king of the Jews?” King Herod hears this, and he is frightened and all Jerusalem with him, frightened, not jubilant.

The wise men’s question was political dynamite. The birth of the child spelled trouble, a potential rival. Herod so feared the child that when the wise men did not return to tell him the child’s whereabouts, he orders his soldiers to kill all the children in and around Bethlehem who were two years old or under. And in that little town a great weeping was heard, but Joseph, Mary and the child fled, crossing the border into Egypt, refugees. There is nothing sentimental here.

Matthew introduces Jesus, the Messiah, as the son of David, who would sit on David’s throne and be King forever. It’s an aspect of the good news that we often overlook. We’re more inclined to link Jesus with Adam rather than David. “For as in Adam all die, so in Christ all will be made alive” (1 Corinthians 15:22). It’s central to our faith, but not at the expense of minimizing, or missing completely, the link to David. Our new new life in Christ is Kingdom life.

That Kingdom is not an inner sanctuary, a private concern, but an alternative people, an alternative world, an alternative politics. Herod did not murder the little ones because he feared that the child in Bethlehem would grow up to take away people’s sins, but because the child was born a King, and if a King, then a kingdom. Herod’s fury marks a clash of kingdoms. It’s the opening battle of the Great War, and the dead are martyrs, witnesses to that great conflict

Jesus begins his ministry calling for repentance because the Kingdom of heaven is at hand. He himself embodies this Kingdom and is the door into it. In the fifth, sixth, and seventh chapters of Matthew, Jesus sets forth the Kingdom’s Manifesto. We call it the Sermon on the Mount, but it’s so much more. It describes a people whose loyalty is to the kingdom of heaven; they serve as its agents, are defined by it. This manifesto challenges the fundamental assumptions of Herod’s world, a world that lacks any sense that the poor and weak have the slightest intrinsic value, where power and brutality work hand in hand. Herod murders the little ones.

Jesus, on the other hand, tells the little children to come to him, not to stop them; for it is for such as these that the kingdom of heaven belongs. He lays his hands on them to bless them. He offers himself as the bread of life. It is a kingdom of radically different values. No one calls another a fool, or a cockroach, or scum, or a maggot. This kingdom’s citizens do not seek revenge, but recognize in all the sign of their maker. Though living in the same world, they see everything differently. As Nick Wolterstorff writes:

It’s time to challenge the understanding of religion as primarily add-on beliefs about the transcendent. They are not theistic add-ons, but interpretations of experience and immanent reality. One cannot just peel off a person’s religious beliefs from the totality of his beliefs and be left with beliefs that he shares with the secularist. Secularism is itself a distinct, anti-religious interpretation of experience and reality. The religious person interprets things differently from how a secularist interprets those same things. Religion in the University

At the very end of Matthew’s gospel, Jesus tells his followers “…make disciples, baptizing them…and teaching them to obey everything that I have commanded you.” The last phrase may strike us as off tune, missing the note of grace so central to the good news. It sounds legalistic. But it’s not legalism; nor is it a means to convict us of our sins or guide us in grateful living. It’s kingdom citizenship, being transformed into living witnesses of the Kingdom of Heaven. Anything less is a sentimental Christmas.