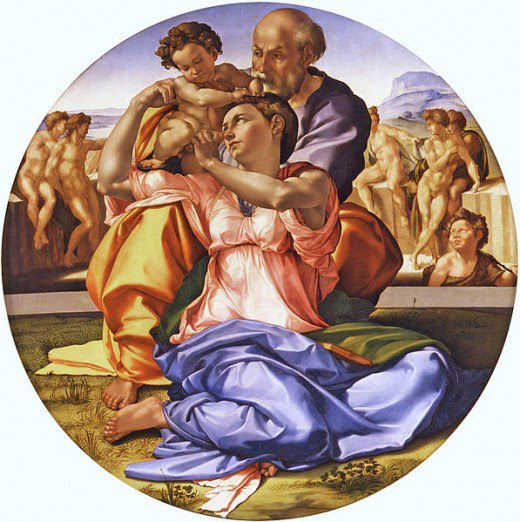 This Advent, I was delighted when my assignment as the “big group” storyteller at Sunday School was the Annunciation. It’s long been a favorite—indeed, it’s something that I especially look for in art galleries when I’m in Europe. (If you’re lucky, I’ll bore you with all the different representations I’ve collected over the years.) I love the tradition that Mary was reading a book when Gabriel came for his visit. I love the paintings that show Gabriel’s words going straight into Mary’s ear. And of course, I love Mary’s radical response, her celebration of all the ways that God upends what is expected, where a virgin can conceive and the poor and hungry and humble are exalted.

So, I was excited to share about Mary with the kids. But my material was adamant, entitling the story, “God Chose Mary and Joseph to Be Jesus’s Parents.” Well, sure, I thought: Joseph does get his own angel visit in a dream to persuade him to parent Jesus. But I must confess, though I had always thought that Joseph’s response to Mary’s pregnancy was believable and understandable, I didn’t go searching for paintings of him in galleries.

But this time something struck me: that Joseph’s side of the story is radical, too. And in much the same way as Mary’s song signals God’s right-ordering of things.

It’s fascinating to me that the book of Matthew doesn’t even include the Annunciation. Chapter 1 is mostly through Joseph’s eyes. And how does it start: with a genealogy. Joseph’s genealogy, to be exact. What a genealogy it is: a direct line from Abraham to Joseph, beautifully symmetrical with its “fourteen generations in all from Abraham to David, fourteen from David to the exile to Babylon, and fourteen from the exile to the Messiah” (Matthew 1:17). Impressive.

Here’s where I think it gets really interesting: this is a fabulous family tree, but Jesus is only heir to this because of his adoption by Joseph. Yet, the very fact of Jesus’s God-requested adoption is amazingly counter-cultural. Even now, it is still an unfortunate common-place to ask adoptive parents which are their “real” children. Jesus was born into a culture that didn’t have adoption as a legal principle. Orphans were to be cared for, but adoptees did not have the same legal/family status as “real” children. Interestingly, their birth parents determined their status. Of course, Jesus, as God’s son, has the ultimate patrilineage (and that’s not even bringing in the doctrine of the Trinity)—his “birth” parents do determine his status. At the same time, Joseph was his “real” father, chosen by God, to show that adoption is never the mark of 2nd class status. It’s an incredible fulfillment of Isaiah 9: a son is both born and given.

So, like Mary’s sense that God was turning the world upside down, Joseph’s adoptive parenthood tells a similar story: God’s family is not about royal bloodlines, but about responding in obedience. More than that, God has no “real” children and “adopted” children—we are all, as St. Paul argues, joint heirs.

On this Christmas Day, we can rejoice that because Christ came to earth to live as an adopted son, we are able to take our own place, beloved and welcome in God’s family.