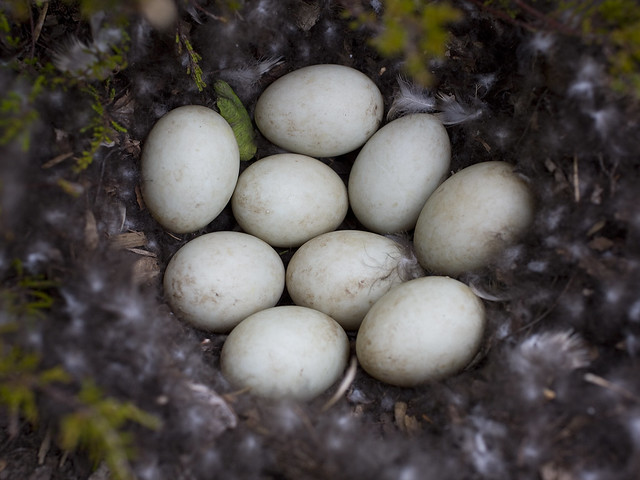 In some Christian communities it is important that you know the day when you received Jesus into your heart as your personal Savior. Speaking personally, I do not know the time, or the day.

I do know the day, even the particular incident, when I became personally acquainted with my sinfulness. I was eight years old and living in Friesland, the Netherlands. It was summer, and my friend Meindert and I were going fishing.

We were walking through the fields, each with a bamboo fishing rod in hand, when we spot a mallard duck sitting on her nest along one of the smaller streams that crisscross the fields. One of us says, “I wonder how many eggs she’s sitting on”?

We both decide to go and find out. As we walk towards the nest, we make some noise to shoo her away. But instead of being obliging, she hisses and comes towards us as though to attack. We raise our fishing poles to scare her off. But she’s undaunted, and with wings spread, she makes a running dash to scare us off. Now we are yelling and swinging our poles,

She finally takes to the air, and we walk to the nest. There are at least a dozen eggs. We bent down to get an exact count, when suddenly, the duck is back, dive bombing, coming very close. We stand up swinging our poles, yelling at her, “You stupid bird”! She lands, but again goes into her attack position. She is furious and will not have us near her eggs.

It is at this point, in the midst of the racket of our yelling and the duck’s frantic squawking, that madness takes hold of us. We’ll show this bird who’s boss. We each reach down into the nest and grab an egg and heave it at her. Now the bird goes crazy. She cannot save her eggs, and we can’t walk away.

It’s a pitched battle that doesn’t end until the last egg has been thrown. Then and only then does the bird fly away. All is quiet. We look about us and to our horror see that the eggs had been near to hatching time. The ground is littered with 12 tiny, dead hatchlings.

We start cleaning things up, as if to get rid of any evidence of what had happened here. We pick up every piece of eggshell and the dead hatchlings and throw them all in the stream. We watch as they slowly disappear.

Then Meindert says: “In the Bible, God would make us drink the water.” I knew he was referring to the story of Moses and the golden calf. You may know the text. “Moses took the calf they had made, burned it with fire, ground it to powder, scattered it over the water, and made the Israelites drink it” (Exodus 32:20). I didn’t know how the Israelites understood this action, but I, at that moment, understood it to mean, own and recognize the evil you have done.

This incident has stayed with me all my life. Many years later, in the late 1970s, listening to the news, the reporter described the total destruction of a village in Nigeria. He said, “It looks as though a wild beast has gone on a rampage; dead bodies of young and old are strewn everywhere.” I understood. I am not surprised by evil — saddened, angry, but not surprised.

When the Word became flesh and lived among us, he took up residency in a dangerous neighborhood.

We are not safe. We need, desperately, to be saved.

During Advent I love singing: “Ready my Heart” by Lois Shuford

Mine is the home that is poor and is barren
Mine is the stable of cold and stone
Break the light to each corner
Of doubt and of darkness
Now the Word is made flesh
for his birth in me.