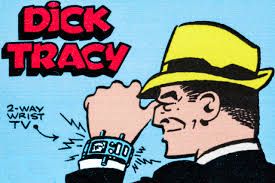 It was my idea to bring in an expert.

For a couple of years in the 90s, I was chair of a board that ran a media ministry, and I thought it might be a good idea to bring in someone who had a sense of where this whole media business would be taking us in the future.

I did, and he did as requested, wonderfully I might add, as requested. Dr. Quentin Schultze, now retired, but then a professor of communications at Calvin College (now University) masterfully introduced us to a future that, right then, seemed light years away, describing an “information age” that seemed beyond the imagination for most of us. Me, too.

What I remember best was his explaining that technology was about to enable each of us to read an entire library on a wrist watch. This was no Dick Tracy fantasy, but an actual gizmo that could call in so much information we’d never, ever reach the end.

What’s more, some time soon, he told us, we’d be able to watch whatever show we desired on a cell phone. We wouldn’t be limited by TV channels or networks; instead, new technology would open up movies and TV shows in a thousand independent ways.

New technology, he told us, would most certainly affect how our broadcast ministry went about its work.

Some board members giggled, sure that this professor was dealing in science fiction. Some just shook their heads.

A quarter century later, most every night my wife’s watch is plugged in to a charger. That watch does everything Professor Schultz told us it would, and he didn’t even mention counting footsteps.

The novelist Fred Manfred loved to say how he’d gone off to Calvin College early in the 20th century with little more than the clothes on his back and his entire library—just two books: the Bible and the works of William Shakespeare. He would not have thought of not taking them, so precious they were, his only two books. Dr. Arlyn Meyer, another Siouxlander, told a very similar story. He owned the same two precious books—the Bible and Shakespeare—when he left for college. Not long ago he retired from a lifetime of teaching at Valparaiso.

Today we live in a different age. There’s no end to what this screen I’m looking at can show me, no end to what you and I can read or have read to us every single moment of the day or night. Google “meditation” some time, and you can follow options all morning long.

I’m sure I’m speaking for the entire roster of writers—regulars and subs—when I say that we’re greatly—hugely–thankful for your attention. We know very well you’ve got endless choices.

We hope you will continue to follow The Twelve and The Reformed Journal.

To support the ministry, click on the blue “Donate” buttons here to register your donation. Giving regularly, say on a monthly basis, would be especially appreciated.

Thanks again for your trust and your support.