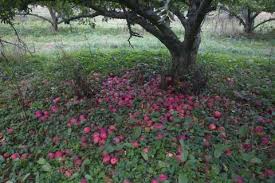 An Apple in an Overgrown Orchard

My doctors have told me that I can help myself in my fight against lymphatic cancer by eliminating sugar from my diet, eating more fruits and vegetables, and exercising. So I have been trying to do just that.

Eliminating sugar has been the hardest change to make. I am a kid who looked forward to Halloween more than Christmas and lamented entering sixth grade because it meant that I was too old to trick or treat. But tastes do change. A few days ago, I found a half-eaten bar of milk chocolate in the cupboard and decided to finish it. It was sickening sweet, almost foul tasting.

My diet consists now mostly of the so-called superfoods: blueberries, sweet potatoes, avocados, garbanzo beans, lentils, spinach, and broccoli. I have been eating so much broccoli that my skin is turning green, and I have been taking a lot of walks.

My walks have become an unexpected delight. Having been a runner all my life, I always felt that walking was an inferior form of exercise. But I am now finding that that is not the case. Like running, walking moves me to a deeper level of awareness of my body and its dependency on the world around me, from the air I breathe to the water I drink to the food I eat, and the fact of this dependency awakens in me a sense of God’s presence in the gifts of the created order. Unlike running in which exhaustion soon overwhelms and shuts down my mind, walking frees it, and my thoughts roam far and wander wide. Often I find that I am talking to someone. It took me a while to realize that I was praying.

One of my favorite walks takes me from my house on State Street eastward down 24th Street to a park, the old homestead of the Albertus van Raalte family, the founder of Holland, Michigan. The park has a network of trails that meander through woods and along a creek.

This fall I noticed that apples had fallen at places along the trail. When I stopped and looked around, I realized that the woods had grown up and through an old apple orchard. A few apple trees had survived and were doing what God had created them to do, dropping their fruit whether any one was there to eat it or not.

I stopped to pick up an apple. Worms had burrowed into some of them and animals had chewed on others. But I found a good one and took a bite. It had a wild sweetness about it. I could taste and see the goodness of the air, water, soil, and sun that had produced it. I felt deeply connected to the world around me and thankful to be part of such abundance. I intended only to take one bite, but I hungrily ate it down to its seedy core.

I stood there for a while under that old apple tree with apple core in hand. This moment, all our moments really, are thick; they are filled with so much more than we are capable of taking in. The biblical way of saying this is that the world is full of the glory of God—the root meaning of glory being “thick” or “dense.”

My thoughts ran from the apple to the overgrown orchard and finally to the Garden of God. Scripture offers many images of God that help us invoke and approach the Ineffable One. In the Reformed tradition, the preferred image is Sovereign and believers have for centuries now probed its rich possibilities. But there are other images equally rich that we in the Reformed tradition ignore.

One of these is Gardener. From the beginning to the end, from the first chapters of Genesis to the final chapters of Revelation, the Scriptures portray God as a Gardener and creation itself as the Garden of God. God delights in the garden’s beauty and abundance and delights in feeding all God’s creatures (cf. Psalm 104). But God despairs when human disobedience despoils and fouls the garden. God despairs when the “land mourns, and all who dwell in it languish, when not only human beings but the beasts of the field, the birds of the air, and even the fish of the sea are taken away” (Hosea 4:3).

Hosea’s words take on added meaning today. Once again the land mourns and all who dwell in it languish. This is well known to anyone who cares enough to look at the scientific evidence. And the despoiling powers continue to reign seemingly unchecked. Many of us who hear these cries of mourning are struggling to find hope in the midst of our languishing. So where is hope to be found? Maybe in unexpected places.

This reflection comes from a forthcoming spiritual autobiography, Trying to See Life Through: Places Thick and Thin, in which I probe the thickness of everyday experiences to find traces of the presence of God.