A friend of mine says that Mary Oliver saved his life. Her vivid opening line in the poem, “The Journey” pierced him with an urgent truth:

One day you finally knew what you had to do, and began, though the voices
around you kept shouting. . .

So, my friend began telling the truth about himself to himself, first of all, and then to his near world. Mary Oliver gave him permission and courage to do so.

The death of Mary Oliver last month produced an outpouring of gratitude and grief that ordinarily does not accompany the death of a poet—at least in our frantic culture.

Poetry is a gift that takes time and care to receive. But the sharp and perceptive voice of this poet found its way again and again to hidden emotional interiors in so many people. 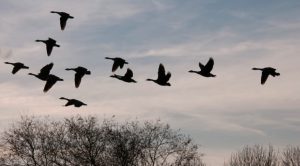 Postings on Facebook turned, for a few days in the middle of January, from political venting to deeply personal testimonies. I read these with a growing sense of wonder. One friend found holy affirmation of her own embodiment in the poem, “Wild Geese,” particularly the line, “You only have to let the soft animal of your body love what it loves.” Another realized that her depression received a sort of benediction in the poem, “The Uses of Sorrow,” which contains the poignant line, “Someone I loved once gave me a box full of darkness. It took me years to understand that this too, was a gift.” At the risk of exhausting the sparkle and lift of a familiar line, many Facebook friends delight in the, “Tell me, what is it you plan to do with your one wild and precious life?” from “The Summer Day.” 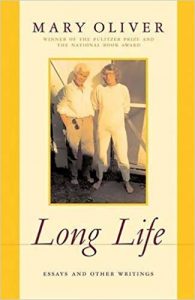 It occurred to me, as I observed this tidal wave of tender responses to Mary Oliver, that she truly was an epiphany poet. In this season of Epiphany, she points the way past the headliner events of the Magi and the baptism of Jesus and the wedding at Cana. If Epiphany is about receiving the revelation of God, then Mary Oliver surely was an epiphany poet because she received with such abandon and joy, with such playfulness and wonder. She once said, in Long Life, “What does it mean that the earth is so beautiful? And what shall I do about it?” She answered her own question in her poem, “Yes! No!” when she states, “To pay attention, this is our endless and proper work.”

Her keen curiosity about and awareness of the natural world marks her as an epiphany poet—but not of the blockbuster revelations of Jesus’ life in the gospels. The primary stories of Epiphany do not interest Mary Oliver. Rather, the revelations of the moon’s waxing and waning, the tides’ ebbing and flowing, the flowers budding and seeding, the wild geese in formation and sound—these capture her. She narrates such an epiphany in her poem, “I Happen to Be Standing.” A few selected lines capture her keen eye:

I don’t know where prayers go,
or what they do.
Do cats pray, while they sleep
half-asleep in the sun? . . .
While I was thinking this I happened to be standing
just outside my door, with my notebook open,
which is the way I begin every morning.
Then a wren in the privet began to sing.
He was positively drenched in enthusiasm,
I don’t know why. . .
But I thought, of the wren’s singing, what could this be
if it isn’t a prayer?
So I just listened, my pen in the air. 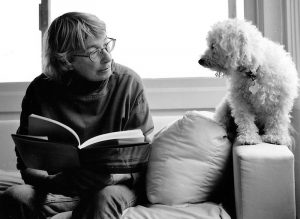 Such epiphanies are not based only in acute observation but also in playful imagination. Krista Tippett interviewed Mary Oliver in 2015 for the NPR broadcast On Being. In that interview, some of Oliver’s impish delight in all the little epiphanies of the world bubbled up. When wondering what heaven would be like, Krista Tippett asked her about her lifelong love of dogs. Yes, Oliver said, surely dogs will be in heaven. Then she added additional occupants for good measure, including the “poor little burros and donkeys, after all the work they’ve done in the world. Good heavens, yes.”

Mary Oliver’s invitation to us in this season of Epiphany is to attend to all the small epiphanies that we so often pass by. God sometime reveals, surely, in the spectacular and singular. But God also sometimes reveals in the mundane and the material. Mary Oliver noticed the wren, the grasshopper, the bud, the dog, and the burro, epiphanies all, every one.