I snapped this shot at the Somalia exhibit at St. Paul’s Minnesota History Center. I wanted a picture of the plow, that wooden contraption in the far corner, a venerable, ox-drawn ancestor of, well, this 21-bottom plow pulled along by a Big Bud behemoth, 900 horsepower, if you’re measuring muscle.

Imagine, for a moment, coming from the mud hut above–a typical Somalian domicile–to the massive agri-world below. That Big Bud could open up more prairie ground in an hour than you could hope to see in a decade behind a sweaty team of oxen and that old wooden doohickey.

Traditionally, Somalis were largely nomadic.  They carried their shelters on camel back across a divided country that is, save for valleys and coast lines, hot and desert-like. Today, tens of thousands Somalis live in Minnesota, an unlikely adopted homeland for so many black African Muslims. Just this week, a heat wave has descended over the “land of 10,000 lakes”; temps are expected to amble along in the balmy 40s. I’m not kidding. Strange weather.

Twenty below isn’t rare here this time of year. Natives take some pride in their blessed deep freeze–“thirty below keeps out the riff-raff,” some whisper. But if you’re a Somali “nomadic pastoralist,” accustomed to scorching heat, Minnesota must be far beyond night-marish. What’s more, to black Africans, Minnesota must seem to overflow with the pale faces of blonde Nordics, their descendants anyway.

If blondes have more fun, Minnesota must be endless bacchanalia. But they’re Lutheran anyway. So they know their sin, right? And yours too. They’re people who’ve been known occasionally to smile.

Imagine, for a moment, being a devout Muslim Somalian displaced by never-ending bloodletting in a civil war that all too regularly takes the lives of people you love. Imagine escaping the danger all around that house in the museum display, leaving that thick grassy roof behind, getting on a jet in Mogadishu, then flying across the world, getting out at the airport, and walking into the Mall of America. It’s as easy to underestimate the intense struggles of immigration as it is overestimate them. Somewhere in all of us, after all, a desire to be free is bunked beside the deep need to be loved.

Across town, Minnesota’s Swedish Institute is housed in a castle in downtown Minneapolis. Seriously. I’m not making this up–right there, downtown Minneapolis, stands a European-looking castle built to a design its wealthy owners determined they wanted to bring to Minnesota. Think I’m kidding? Look for yourself. 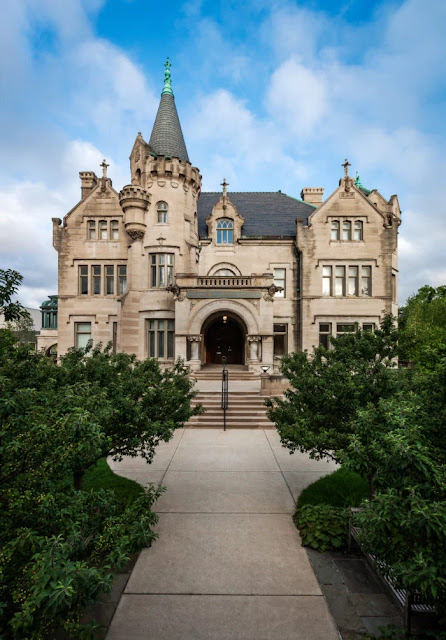 Swan Turnblad and his reclusive wife, Christina, wanted to bring a bit of Europe to the Twin Cities, and had the bucks to build it, so they did. All of that is the American Dream, really, and the Turnblads, dirt poor immigrants from Sweden, are quintessential Dreamers.

Just one of the features of this castle, inside, is a gallery of wood carvings that are just plain stunning. See for yourself. 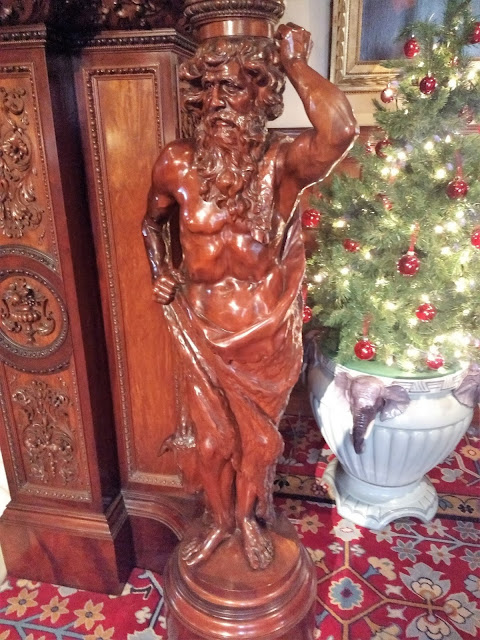 It’s an incredible piece of work, four-feet tall. This Neptune-like bearded man is cutting a suspiciously randy pose, one arm sweetly up over his head, starlet-like, the other holding back a breech cloth we’d just as soon not see fall. There’s probably intent in this art, some abiding moral, but I didn’t care to stick around to discover what meaning it carries.

Right there beside it in front room, where you ascend the stairs, you’ll find a couple of weighty banister carvings that feel classical, but are meant, our tour guide told us, as symbols–a pair of lions outfitted with eagle’s wings. 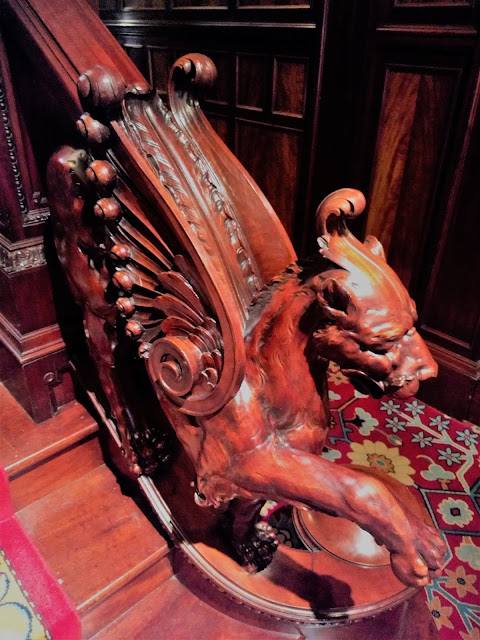 They were deliberately ordered up by the Turnblads and carved out by some old country craftsman to represent the world as Turnblads knew it. What they wanted was something to combine the cultures they loved–American eagles and the Swedish lions.

Makes for a pair of unlikely front room greeters.

But let me remind you that Christina Turnblad’s very first job, in Worthington, Minnesota, paid no salary whatsoever, no wage, no money, not a dime. She and her parents had less than nothing when they came to this country, so the best she could do–with no English, no education, and no work experience–was on-the-job training for a banker named Smith, room-and-board for endless work that would teach her to become a good domestic.

She and her husband ended up ascending golden stairways attended by hand-carved lions adorned with eagle’s wings. In a castle too yet.