The story goes that Michelangelo used to come by St. Peter’s Basilica at night to stand there before his sculpture, not because he was so proud of what he’d done but because he’d grown to love this woman, this Mary, mother of  Christ, he’d created. Some say that as he’d crafted her so wondrously from marble, she had become the mother he’d lost when he was a boy, just five years old. For five hundred years, others, I’m sure, have different visions.

I don’t know if those stories are true, nor does anyone, but I know the sheer beauty of Michelangelo’s Piata’ is remarkable enough to create stories. It was a commissioned by a rich man who wanted something beautiful to adorn his tomb, and it was finished in two years, when Michelangelo was just 24 years old. Today, all those years later later, the Piata’ is as famous as anything you will stand in line to see in Rome. In St. Peter’s, it’s placed where it has been since the 18th century, but Rome has been its home since he finished it in 1499.

Because there’s so much else to gather your attention in the basilica, the Piata’, oddly enough, is easy to miss when you walk in. But it’s there to your right, bathed in a light so soft it composes a perfect picture for you. I’d like to say it took me an hour to set up this shot, but Michelangelo’s masterpiece sits in a beautiful frame lit so gloriously you can’t miss.

What everyone sees when they look closely is a Mary who is far too young to have a thirty-year-old crucified son. She seems a child herself. That’s no mistake. Like no one else, Michelangelo might say, she is the mother of our Lord, therefore like no one else. 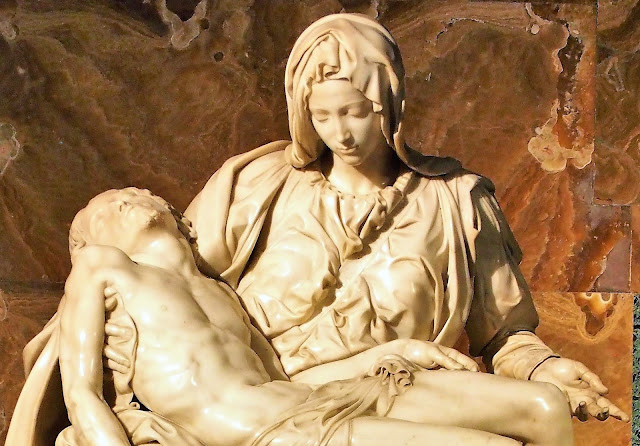 Christ’s limp body is muscled and veined. He is not a boy. Yet, he somehow needs to be held. With her right hand, she holds his body, even though her fingers don’t touch his cold flesh. Piata (“the pity”) is a child mom holding her dead son.  Age is of no concern.

Long ago already observers speculated that if Michelangelo’s Mary could step out of the marble, she’d be seven feet tall. But so much of her is hidden beneath her flowing robes that you barely notice. Somehow, as this entire scene emerged from the marble, Michelangelo opened his own vision of mother and child.  He talked often of discovering what was there, as if this beautiful sculpture was simply waiting for him to chip away what wasn’t necessary.

But he’s here too, the artist. Mary’s left hand is open in some gesture. To us? To God? In defiance maybe? Or maybe in acceptance? After all, look at the the serenity in her face. She spent her lifetime somehow knowing. Had to. Her child was, after all, a savior. . .who is Christ the Lord.

Spend some time in Italy, tour a half-dozen basilicas, and you’ll see a couple hundred Madonnas and child–flat, Byzantine Madonnas, fleshy classical Madonnas, big and bouncy baroques–all kinds of Madonnas, babes in tow. In a city where the Virgin will always be queen, there are hundreds, in all shapes and sizes.

By definition and design, the Piata isn’t just another version. And yet, I like to think, it is: the Virgin of Bethlehem, and her boy, a man struck dead for us, Madonna and child from marble. Surely Michelangelo had to see it too.

That look on Mary’s face reminds me of “Mary’s Song,” a poem by Luci Shaw that’s graced with paradox: “His breath (so slight it seems/no breath at all) once ruffled the dark deeps/to sprout a world. . .”

Luci Shaw’s “Mary’s Song” is clearly a Nativity poem, a poem for the season, this season, a poem for Christmas. I hear Shaw’s poem because paradox seems so stunningly set here in a mother’s love so big it really couldn’t be, and a beautiful boy, the Son of God Almighty, a man so seemingly finished.

Here’s the lingering, final play of contraries in Shaw’s poem:

Older than eternity now he

is new. Now native to earth as I am, nailed

to my poor planet, caught that I might be free,

blind in my womb to know my darkness ended,

brought to this birth

for me to be new-born,

and then this tangled, final paradox:

and for him to see me mended

I must see him torn.

That’s what I see here in Mary’s face.